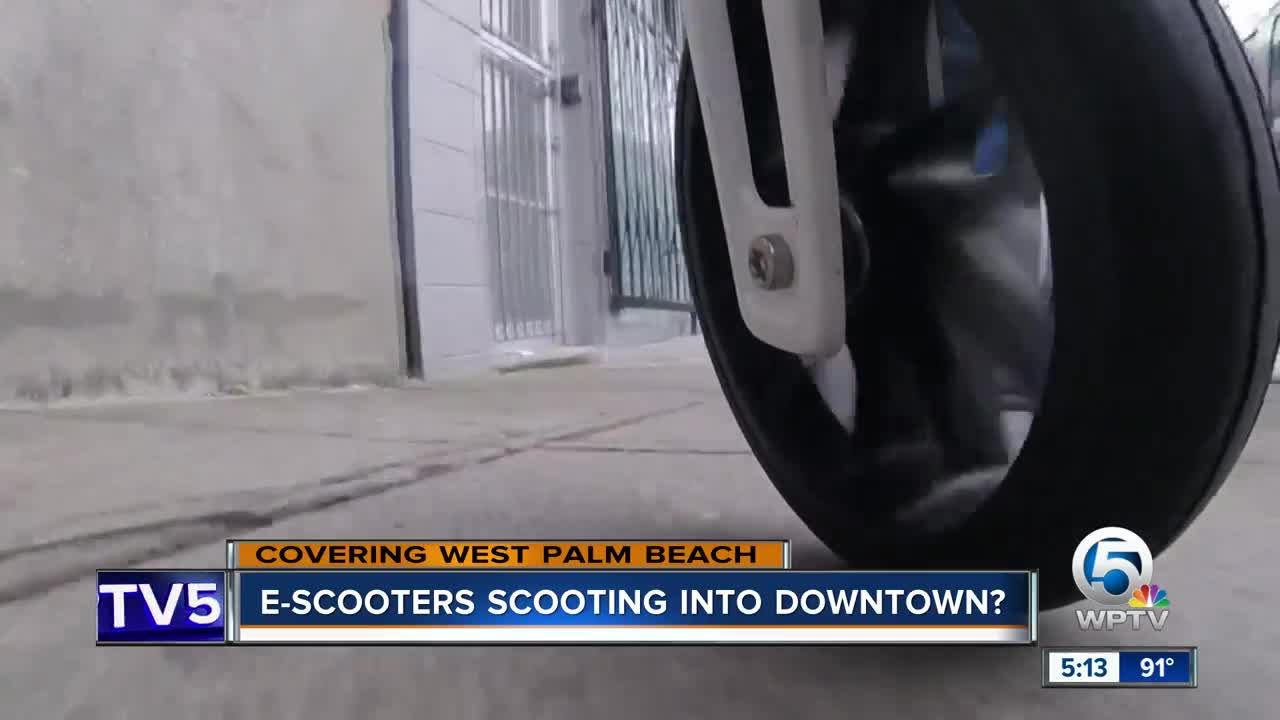 WEST PALM BEACH, Fla. — The Rent-A-Scooter fad is a growing trend across the country.

Now, it could be coming to downtown West Palm Beach.

City Commission is in the process of approving a new ordinance allowing companies to set up shop in downtown, where you would be able to rent a scooter from the street through an app on your phone. The concept is similar to the already established SkyBike in downtown but without the kiosks.

“In 2018, we had 84 million trips across the United States and they just launched in 2017. So the trends are there,” said West Palm Beach City traffic engineer Uyen Dang.

She’s working with the city commissioners on crafting the ordinance, which would allow rental companies to set up their electric scooters or electric bikes in downtown. From there, you can rent a unit simply from an app on your phone.

“It’s convenient,” she said. “$1 to ride, $2 to ride. So a trip that would take a 15-minute walk would take less than five minutes to get from point A to point B. It's so easy for us to download an app.”

Dang says the trend is in-line with the city’s vision to get more cars off the road.

“You move people in less space and scooters and bikes are the most efficient way for people to get around,” she said. "And we see that there’s been a huge change in the way people are moving around, especially in the younger generations."

But she added that the city is aware there will be some hurdles to scoot through.

Cities like Fort Lauderdale and Atlanta have reported problems with accidents and scooters “littering” the sidewalks. That’s because the scooters can be picked up anywhere they are left and be used by the next rider.

Dang said the city is working to control those issues by establishing strong regulations in the ordinance.

“We developed this ordinance with the police department and with parking enforcement,” she said. “If you are operating a scooter on a street and riding dangerously, it’s going to be regulated under moving violation, so a police officer can actually give you a ticket. And if you’re not putting it upright, you could get a ticket from parking enforcement."

People 16 years old and under will not be allowed to operate the bikes or scooters by law. Helmets are not required by law for adults, but it is greatly encouraged to prevent injury.

As far as sidewalks are concerned, those riding e-scooters will be treated like bicyclists so they are expected to use the street and bike lanes for travel. If on a busy sidewalk, the rider must get off and walk the scooter like they would a bike.

Some downtown commuters we spoke to are excited for the new alternative to walking.

“I use them in San Diego and Sao Paulo, Brazil where they have the lanes dedicated to the scooters,” said Caio Gouveia of West Palm Beach. “It’s very quick to hop on one and not get a cab.”

However, others who have tried riding the scooters in other cities -- and had less than pleasant experiences -- are more skeptical.

“Because we have a lot of people who just don’t follow the rules, it’s just going to cause a lot of mayhem,” said Alexandra Alvarez.

She has a huge scar on her head from an e-scooter injury in Los Angeles just two months ago.

“The roads go up and down,” she said. “I didn’t see it coming, so I skidded and hit this big, big pole and knocked out.”

Alvarez was taken to the emergency room of a nearby hospital by a stranger and had six stitches on her head. She people need to be careful and follow the rules if people are riding scooters.

“Ride in the bike lane, that’s probably the only advice I could give you,” she said. “Just stay out of the sidewalk because you could hurt somebody or hurt yourself. Be careful.”

That’s why Dang said the city plans to host several demonstrations leading up to the launch to teach safety and regulations before e-scooters become a reality in downtown West Palm Beach.

“And as we’re getting comfortable, we will expand to other areas,” she added.

The city has not found an e-scooter company yet but when they do, they’re hoping to launch this program by the end of the year. Once the ordinance passes, the city will solicit for operators to apply.