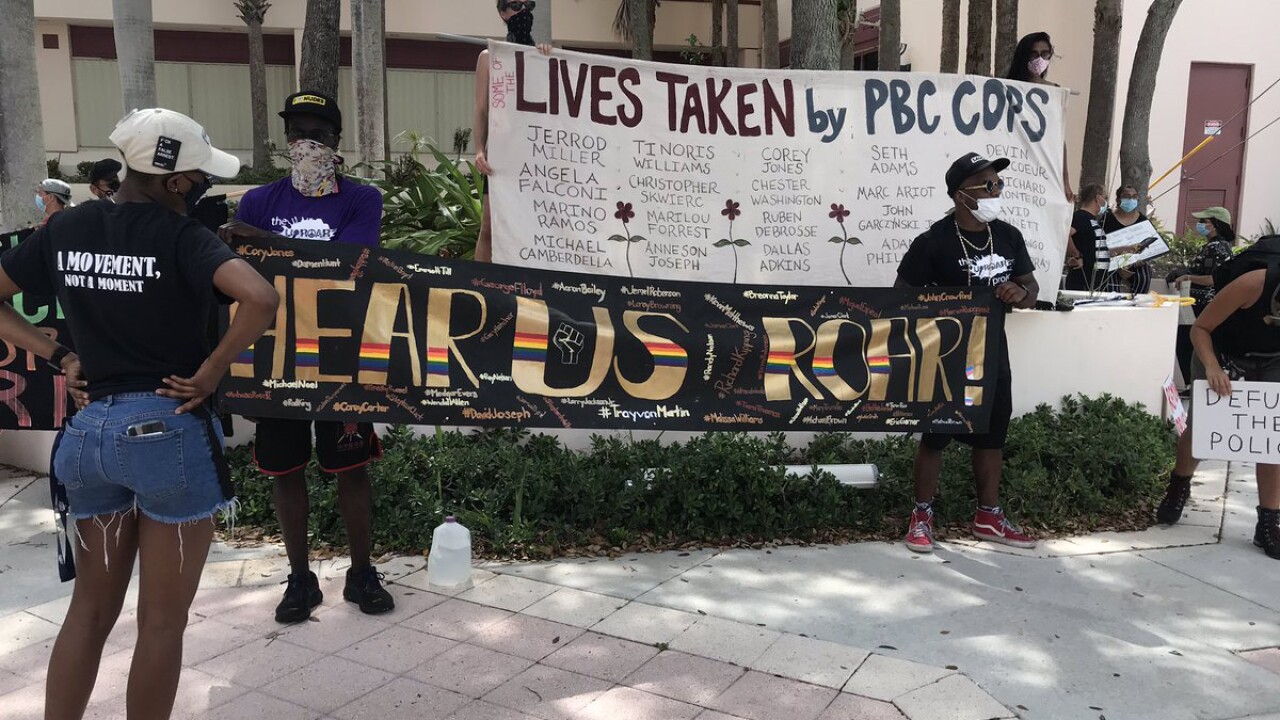 WEST PALM BEACH, Fla. — UPDATE at 07-04-2020 at 7:46 p.m.
Black Lives Matter Alliance Palm Beach says the third-party that interrupted their demonstration was a group of protesters who were leading the "March For Peace" scheduled Saturday at 4 p.m. at the Palm Beach County Courthouse in West Palm Beach.

"We had met with them about a month ago to try and arrange a joint organized and peaceful demonstration," said Black Lives Matter organizer Kyla Edme. She says Black Lives Matter and the March For Peace group were in talks to merge their events. We just had two very different events and two different agendas. For example, she does not want to work with police, and we have no problem working with the police. We wish her no ill will," said Edme.

"No, we are not working with the police," the third-party spokesperson screamed on a bullhorn as they interrupted the Black Lives Matter program that started with a prayer.

Rick Morris, Deputy Chief Of Police, came out of the police station and told the third-party, "This is a peaceful protest, your agitating, you're going to leave."

After the third-party left, on a sound system, Morris told demonstrators, "My job is to protect everybody. I saw you guys were in trouble, and I came out to help you. I'm going to go back into the police station."

Francky Pierre Pau, one of the Black Lives Matter organizers, is worried the agitators will put out the wrong message to the public about his mission. He said Black Lives Matter believes in tactics that always involve peaceful protesting against law enforcement using too much force, and systemic discrimination.

There was one individual at the protest holding a flag that usually represents anarchists.

Black Lives Matter demonstrators gathered for a sit-in in front of the West Palm Beach Police Department on Saturday.

Demonstrators hold “Hear Us Roar!” Sign in front of the @westpalmbch PD at a #BLM sit-in. pic.twitter.com/PcpNn6Zri2

Demonstrators held up a sign with a list of names they say are people who were killed by Palm Beach County officers.