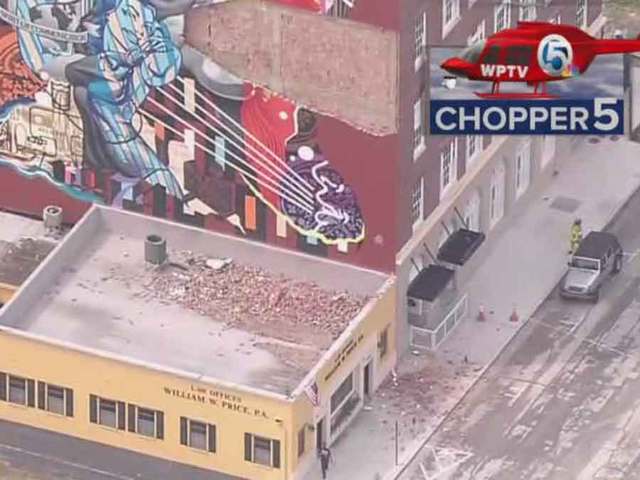 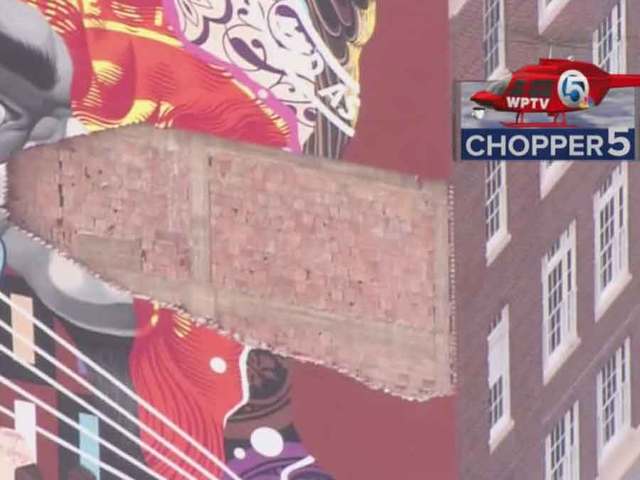 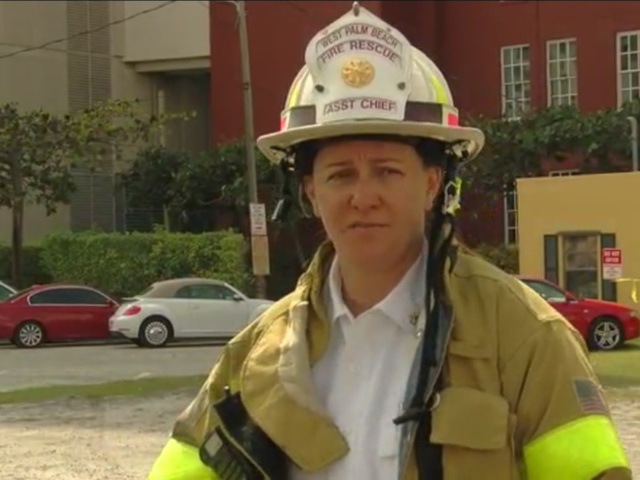 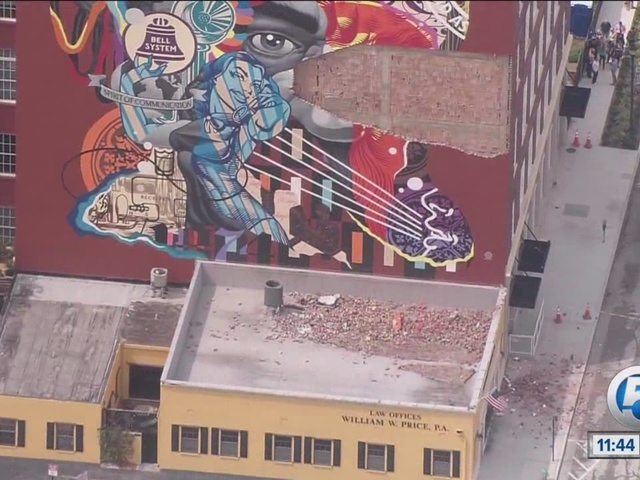 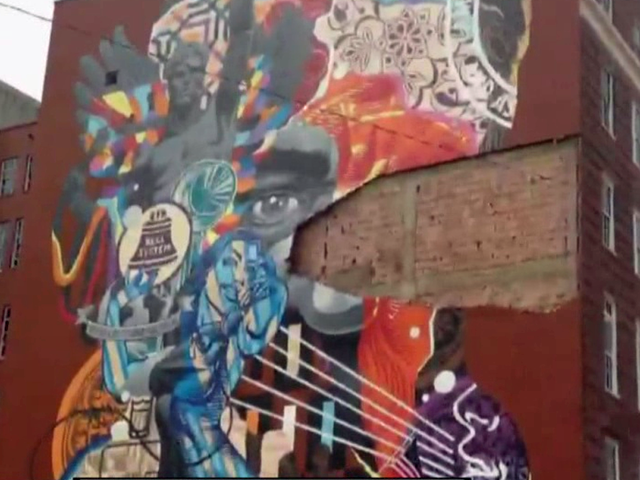 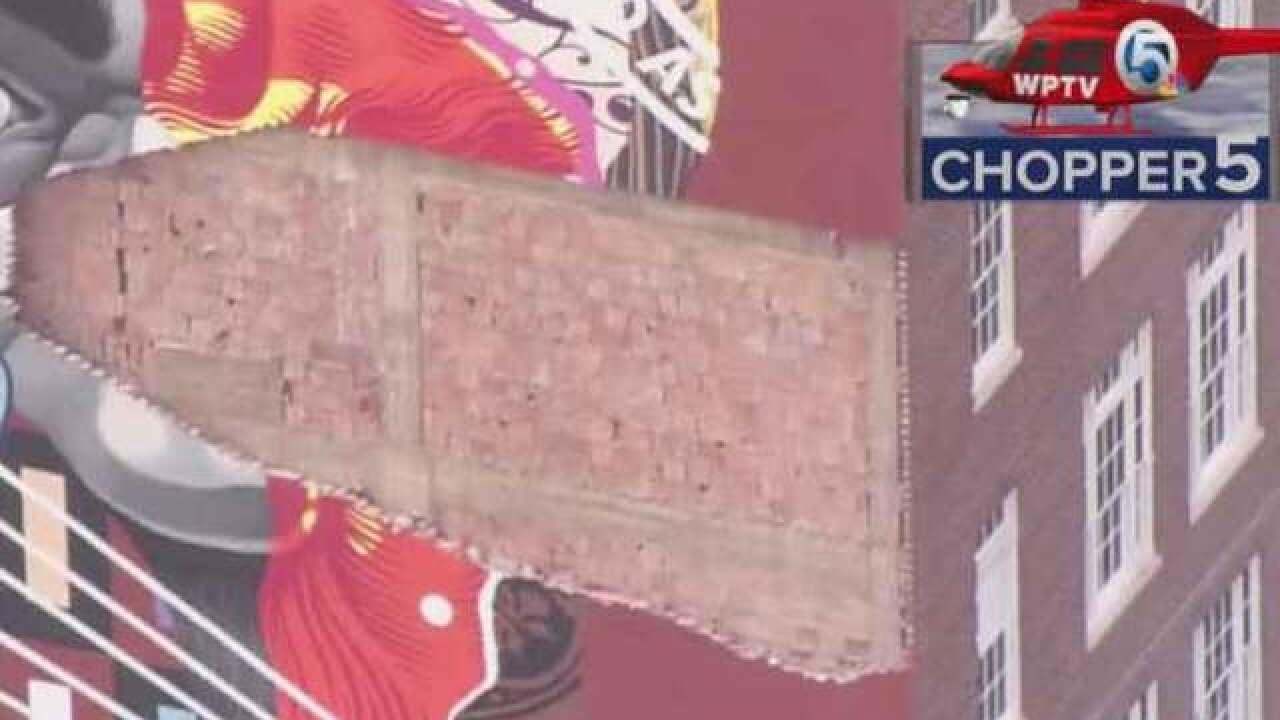 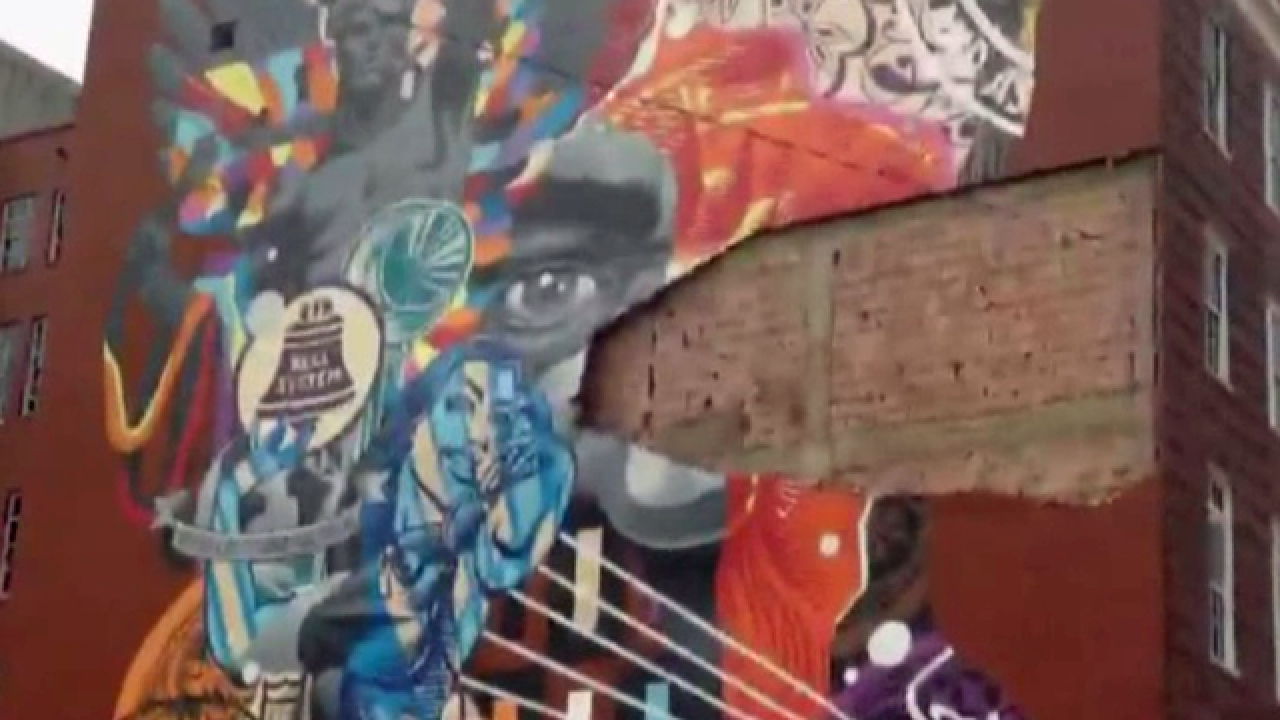 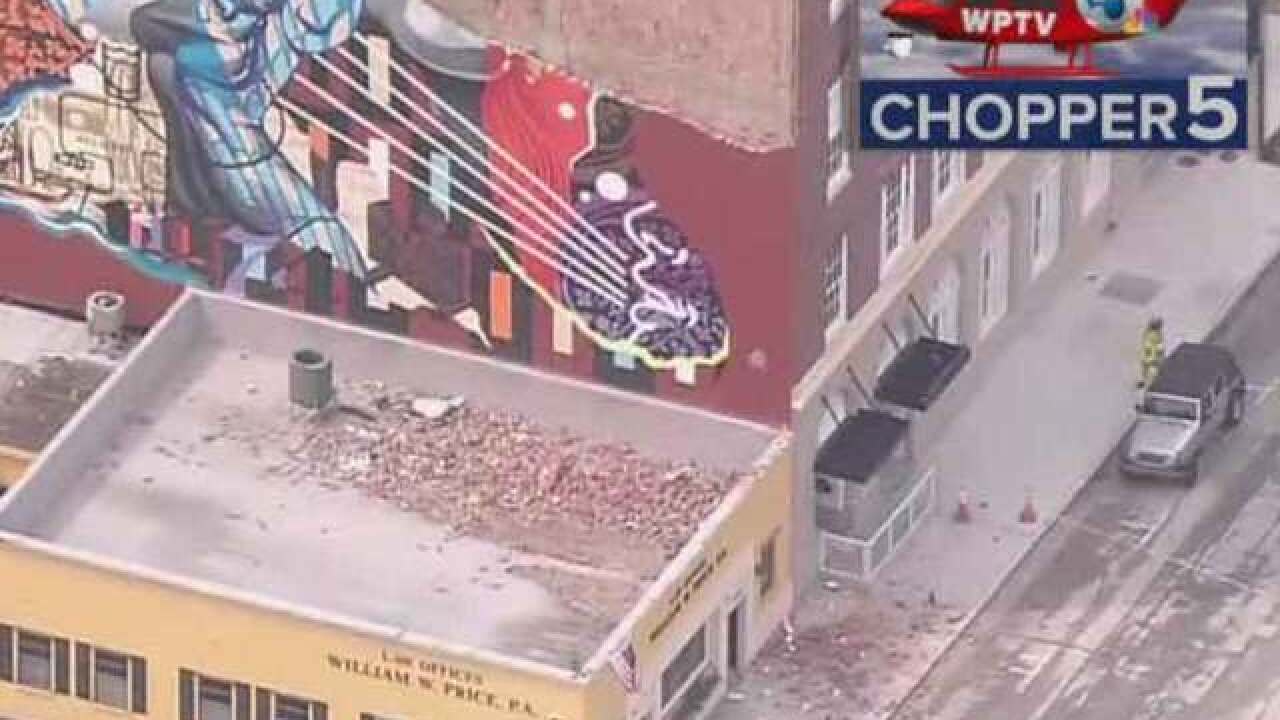 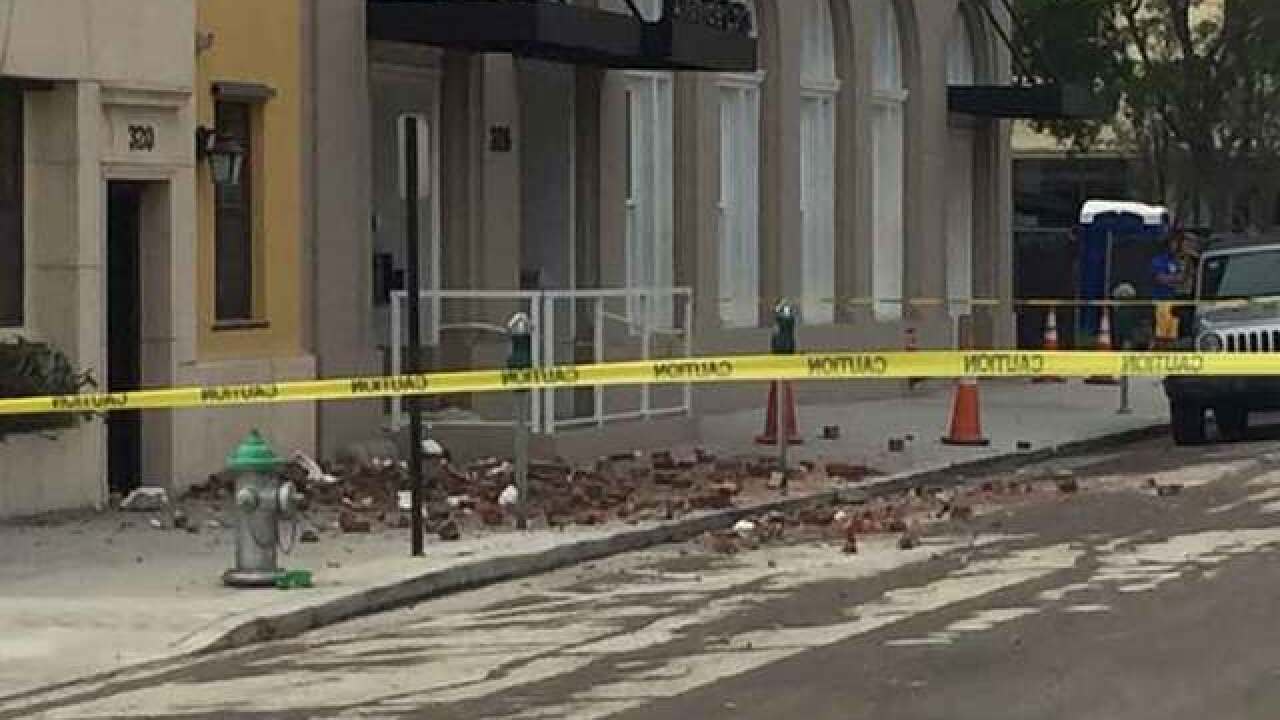 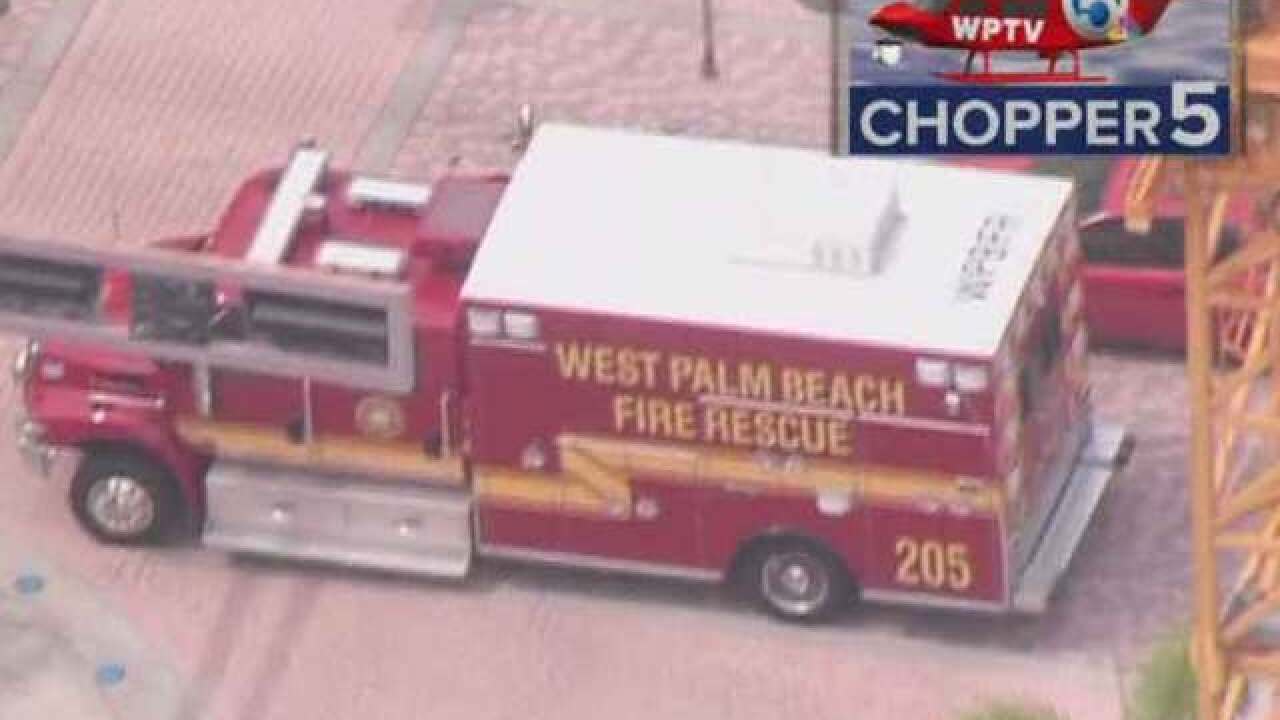 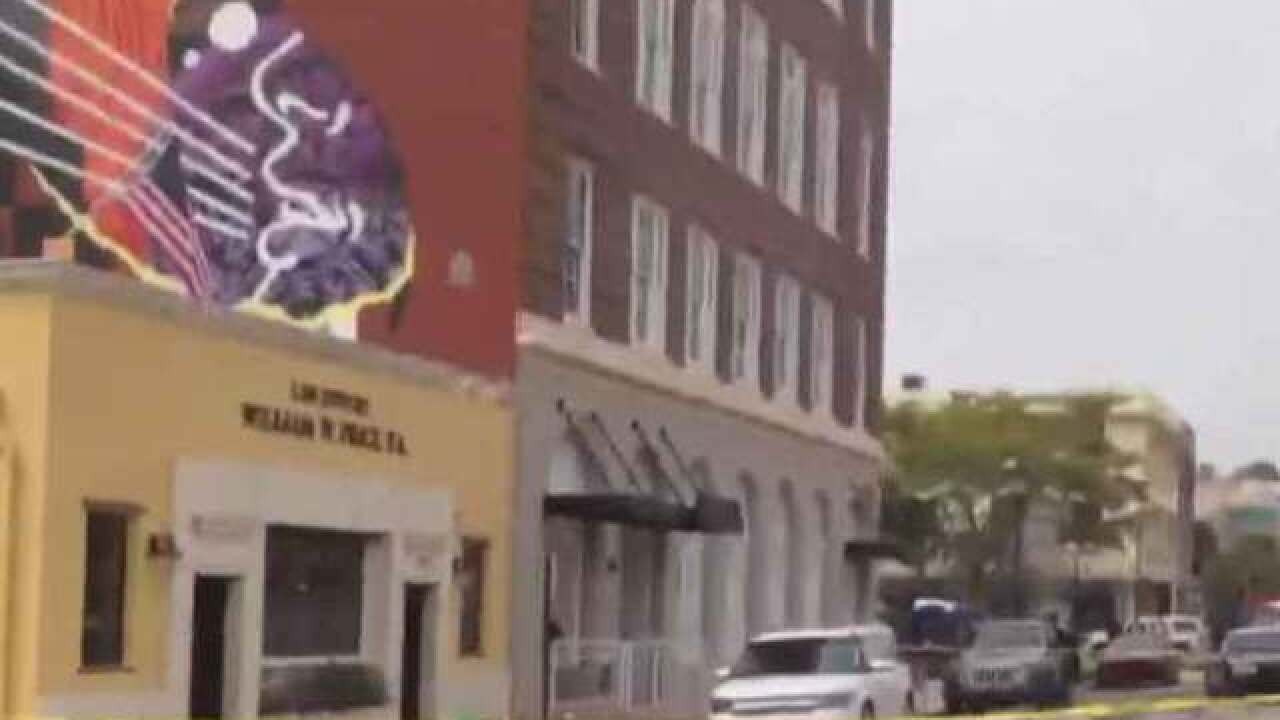 RELATED: Photos from the scene

Officials said a 200-foot section of the side of Alexander Lofts, located at 326 Fern St., fell onto the roof of the William W. Price law firm.

Four people from the law office were taken to the hospital with injuries that were not life threatening.

The area is between Dixie Highway and Olive Avenue.

Part of a mural on the side of the 90-year-old building gave way, causing hundreds of bricks to fall onto the road and law office.

“It was a very loud concussion-type noise, and it was a rolling barrage of bricks that came pouring down on top of the building,” said George, an attorney who works inside the law office. “The roof of the (law) building has been compromised.”

Two bathrooms that have skylights over them at the law office were breached by the collapse and caused a cave-in at several locations.

There is significant damage to four rooms and a hallway in the law office, Assistant West Palm Beach Fire Chief Diana Matty said. In addition she said there are two by 12 beams that hold up the roof that were splintered by the falling bricks.

Photos from inside the law office showed substantial damage.

A West Palm Beach city spokesman says the structural integrity of the Alexander Lofts seems sound but there is a  concern the brick mural is still crumbling. There are 76 occupied units in the building.

Building officials from the city have been inspecting the building.

"Essentially what they determined is the facade, there is a brick facade that is on the outside of the actual structure of the building. That facade is attached by metal attachments. They believe that those metal attachments have rusted away. They estimate the wall has been there about 60 or 70 years and the wall separated as a result of those attachments collapsing and failing and that's what caused the collapse," said West Palm Beach Director of Communications Elliot Cohen.

Cohen said that the same ties that are attaching the facade to the wall also attach the facade to other walls around the building and the concern is that they could fail as well.

Residents of the lofts have been told they cannot go back inside for three days while the bricks are being secured.

Members of the Red Cross are on the scene to help displaced residents.

Meredith Harper says she cried when she came home from work and saw a wall of her apartment building was collapsing, bricks crashing down on the law office next door.

"Luckily the firefighter took the [my] key and went and got my cat for me," said Harper.

Firefighters helped several residents get their dogs, cats, and even fish from their apartments. The Red Cross worked to get more than 70 people in local hotels for a few days.

"That's what the fire department has told us, to plan on three days. They don't want anybody on that street for fear of bricks falling," said Steve Bayer, with the Red Cross.

But three days seems too quick for Shelly Earhart.

"If I'm not mistaken, an engineer said it was sound originally and that didn't seem to work out," said Earhart.

The Alexander Lofts just opened up last year. The building has a wall to wall mural, one of the features that reeled in Jessica Baul.

"It's just unfortunate cause it's a beautiful mural and hopefully they can fix it," said Baul.

Ram Realty, the company that owns the building released a statement saying, "Ram continues to work with local professionals to ensure the safety of our residents and those in the surrounding neighborhood. After careful review, engineers have indicated the structural integrity of Alexander Lofts is sound and we are now working to repair damage to the brick facade. All residents will be provided temporary housing and we anticipate reopening the building soon."

Fire crews shut down construction that was occurring across the street for the rest of the day.  Workers at the law office said their building often vibrates.  It's unclear if the nearby construction caused Thursday's wall collapse.

Fern Street is closed between Dixie Highway and Olive Avenue.

You can see the bricks in the road . Witness tells me bricks went thru roof of law office below @WPTVpic.twitter.com/hgBY6M8gJ9

Pictures from inside West Palm law office where bricks fell from collapsed wall above. @WPTVpic.twitter.com/EZvaBYjgJy