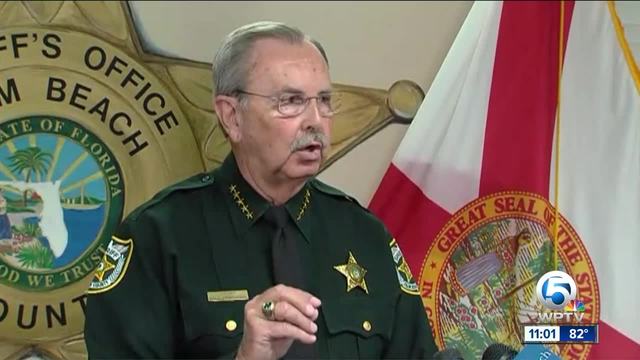 Two people were shot Friday evening during a football game at Palm Beach Central High School in what law enforcement officials are calling a "targeted act of violence between adult individuals." 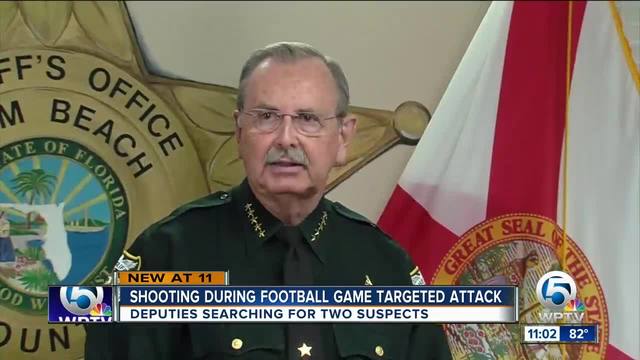 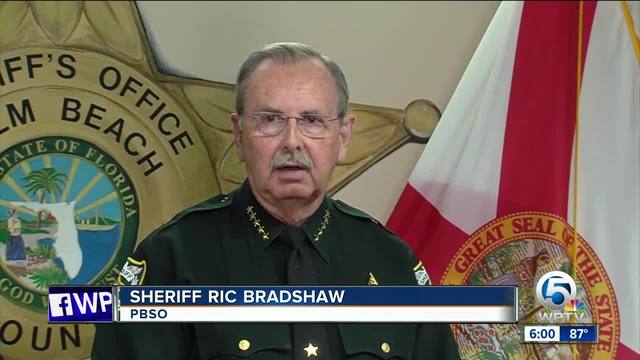 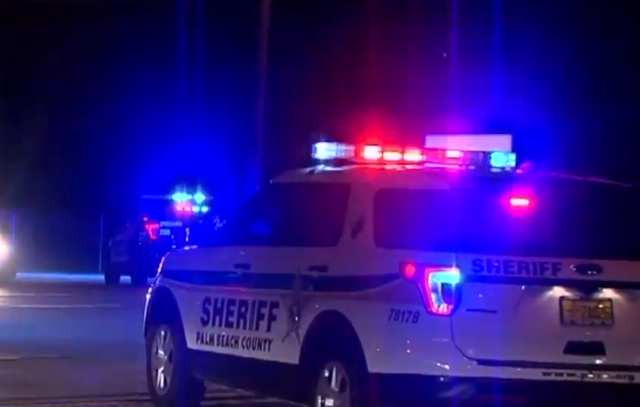 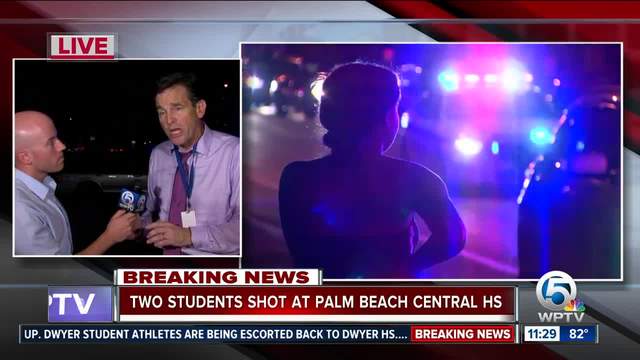 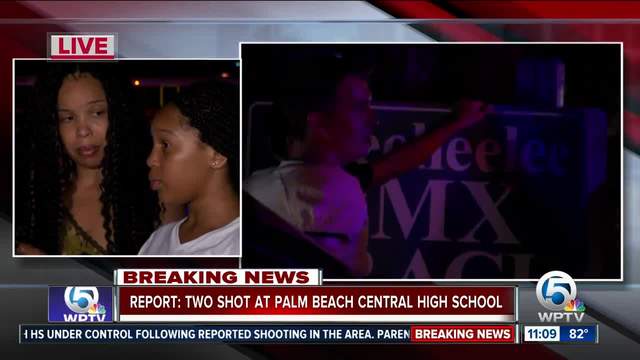 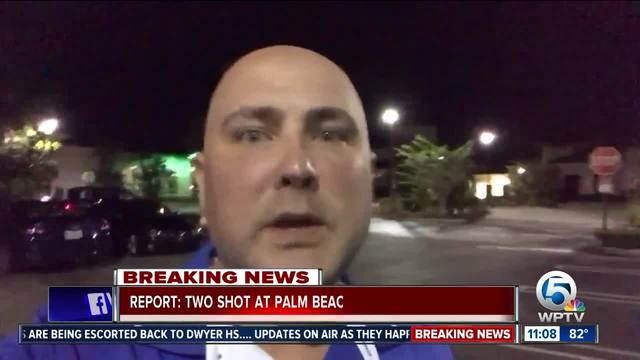 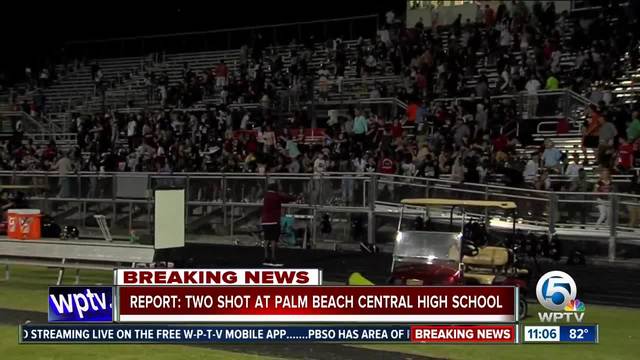 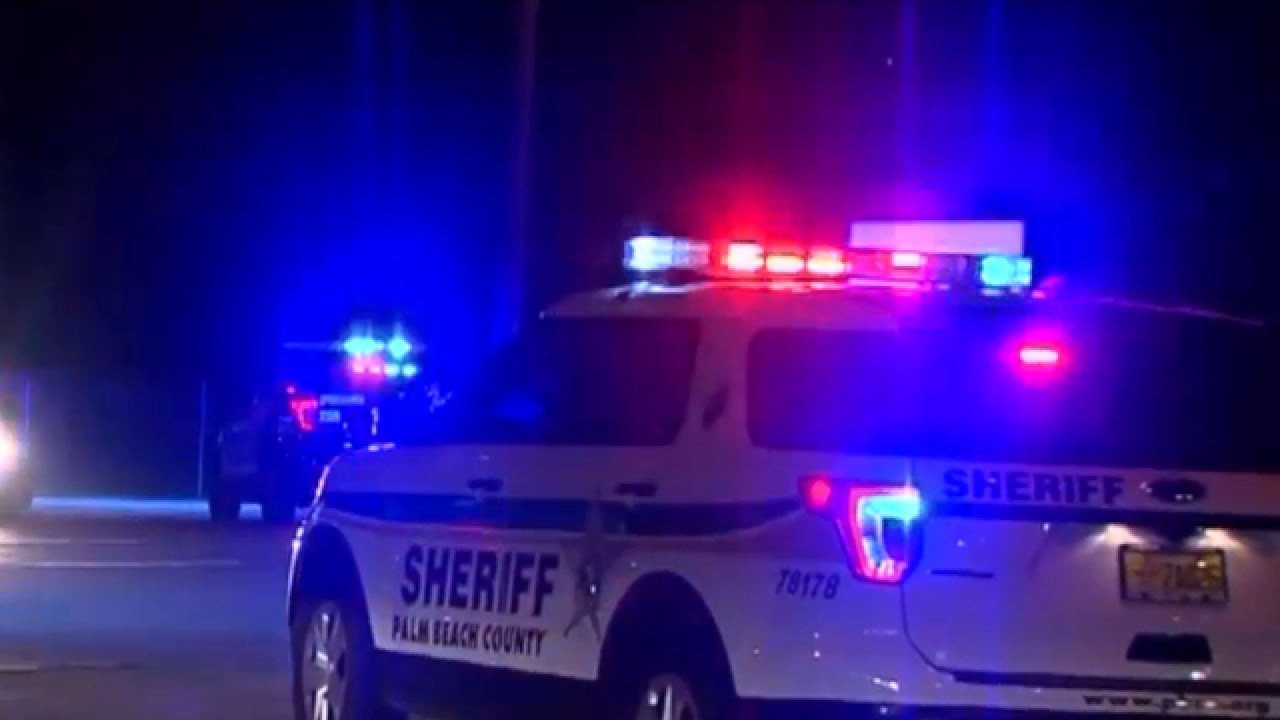 Two people were shot Friday evening during a football game at Palm Beach Central High School in what law enforcement officials are calling a "targeted act of violence between adult individuals."

According to the Palm Beach County Sheriff's Office, one of the victims was located on the school property. The second victim was transported to a local hospital by a friend.

PBSO describes the suspects as the following:

Initial reports from district personnel indicated the shots seem to have come from outside the stadium, the school district said. Details on this remain under investigation.

Dwyer student-athletes boarded the bus and were escorted back to Dwyer High School, according to Kathy Burstein with the School District of Palm Beach County.

Unaccompanied students were picked up in the school's bus loop.

There were a number of law enforcement officers on site. All students are safe, no students are reported injured, according to a tweet from PBCSD.

The School District of Palm Beach County provided counselors at Wellington High School and William T. Dwyer High School from noon to 3 pm on Saturday for any students, parents, and staff who needed to speak to someone about the shooting.

School district officials present at the football game, including school police, school principal, assistant principals and many others do not report any kind of student altercation prior to shots being fired and no student disruptions leading up to shots being fired were reported either, said Burstein.

All district outdoor activities, sporting events, and practices are canceled for the weekend, including third-party rentals of athletic fields, according to the school district.

PBSO issued a statement saying the shooting "was not a random act of violence and had no bearing on the Palm Beach Central or William T. Dwyer High Schools, students, faculty, and/or staff. The shooting occurred just outside the seating area of the stadium near the ticket booth."

PBSO says both victims are adult males and not students in the Palm Beach County school system.

PBSO says this is not an active shooter situation.

2/2 Both students are currently being treated at area hospitals. Conditions are unknown. Gender and ages of the victims have not been confirmed at this time. Suspect information and motive of the altercation is unknown at this time.

Important information for parents of students attending tonight's @PBCHS_Broncos@DwyerHS football game: Unaccompanied students can be picked up in the school's bus loop. There are a number of law enforcement officers on site. All students are safe.

PBSO Dispatch received multiple calls of shots fired in the 8400 block of Forest Hill Blvd, PB Central High School. Deputies have arrived on scene and are currently gathering more information. We do not believe this is an active shooter incident.