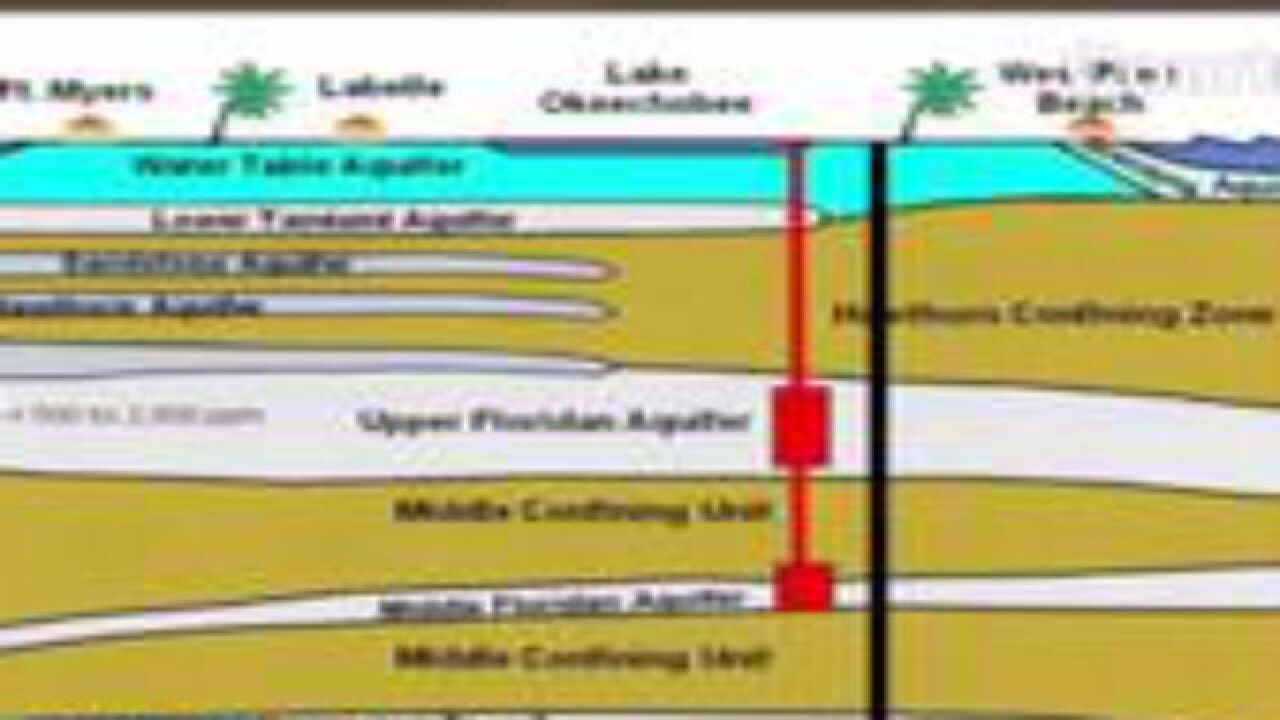 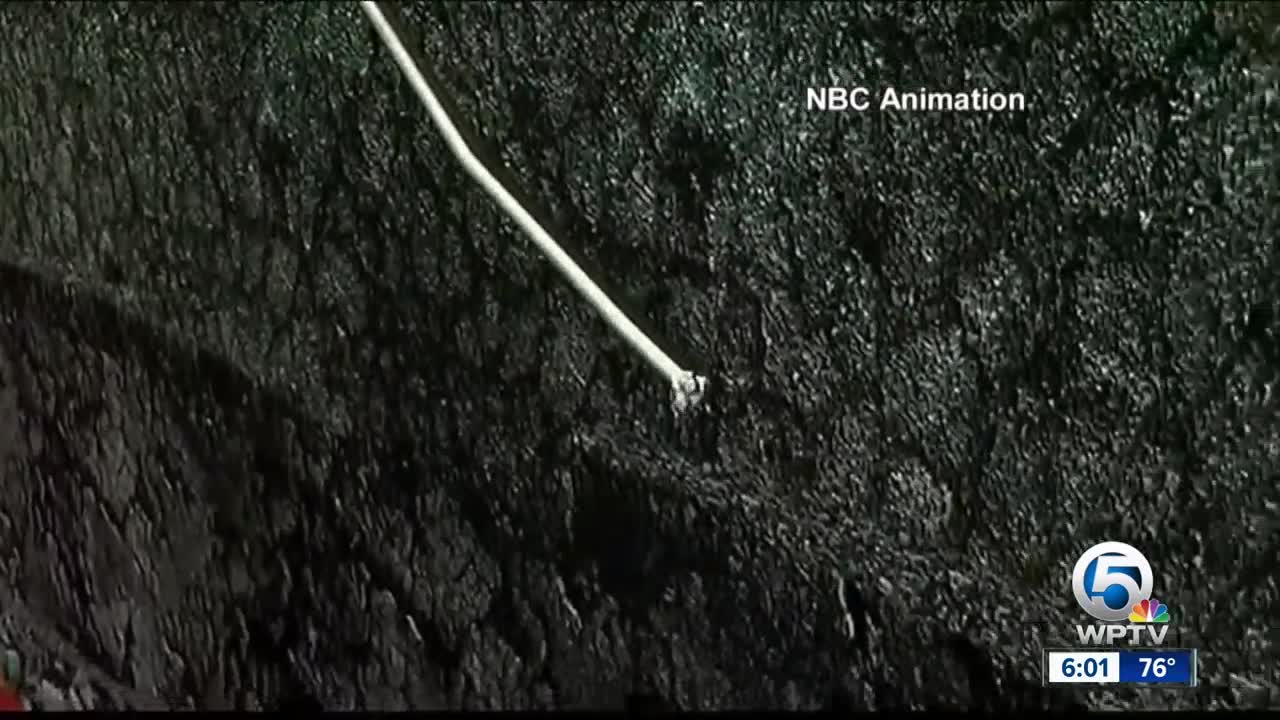 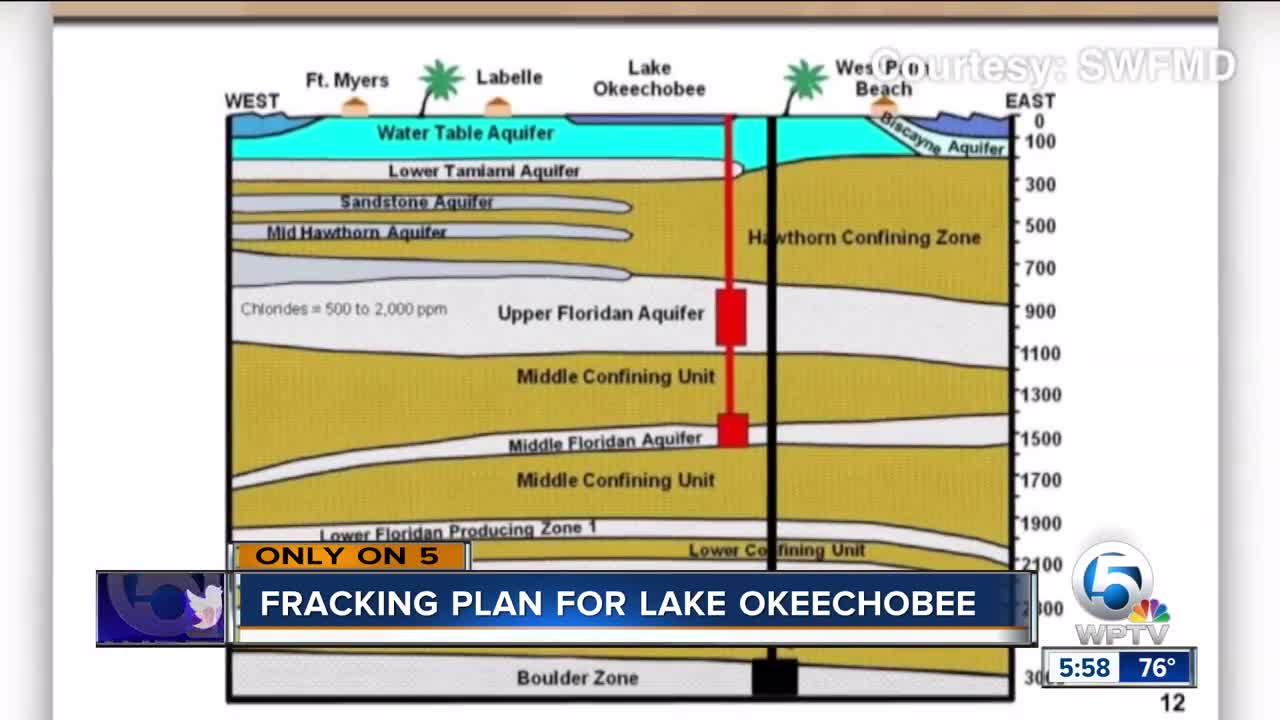 By: Alanna Quillen
Posted at 7:44 PM, Feb 02, 2017
The fight over where to send the water from Lake Okeechobee, in hopes of preventing another algae crisis like we saw in 2016, took an interesting turn on Thursday with an important development and a possible new option.
Instead of battling over sending the water south, east or west, state water authorities proposed sending the excess water from Lake Okeechobee underground.
The plan, which also outlined a combination of water storage technologies, was unveiled for the first time at the Water Resources Advisory Commission meeting on Thursday morning. Some at the meeting said it was a "no brainer" to stop the algae crisis and protect the state's estuary system.
The South Florida Water Management District and the Army Corps of Engineers came up with several strategies, including a project for deep well injections. The project would involve disposing Lake Okeechobee overflow into a large cavern 3,000 feet underground. The results were generated by the collaborative work of state and federal scientists and engineers during the ongoing Lake Okeechobee Watershed Planning Project.
"Quantities of about 15,000 million gallons of water per day, very high capacity," said Bob Verrastro, a lead hydrogeologist for SFWMD.
Verrastro has been working with the Army Corps of Engineers on this idea for about a year. He said the results and data shows the plan can achieve the storage capacity goals north of Lake Okeechobee recommended by the 2015 University of Florida Water Institute Study.
"We certainly haven't decided on how many or where they were going to go, it's a tool in the toolbox that we have available," he said.
The water district also would plan to use the wells in conjunction with the various types of reservoirs and storage technologies that are already being built and designed out at Lake Okeechobee. One of those technologies, called Aquifier Storage and Recovery wells or ASR, is being tested out at the lake. It's a similar type of storage used by city water systems like West Palm Beach, but at Lake Okeechobee, engineers would increase the numbers of ASRs to between 80 and 100 to meet storage requirements.
Click here and here to look at some of the graphics presented at Thursday's meeting.
Verrastro said when it comes to the deep well injections, the impact of the low-level "fracking" here would be different than in other parts of the country.
"In the mid-continent area, those wells are injecting many many hundreds of pounds per square inch, where as the models that we have been able to perform right now show that we would be able to inject the water at pressures of less than 100 pounds per square inch -- which is not nearly enough to cause a fracture," he said, adding that Florida's drinking water would not be threatened. "These injection wells are going to be operated at very very low pressures that would not fracture the aquifer."
The team came up with 150 sites near surrounding estuaries, but at a cost of $3 million to $5 million per well, they could build less if they focus the sites to Lake Okeechobee.
"We can actually use the wells to control the level of the lakes itself and when we looked at those wells it would be a relatively small number of wells -- between 30 and 60 -- that could lower the level of the lake between a half a foot or foot a year," said Verrastro.
After the idea was revealed in Thursday's meeting, people sounded off with mixed reviews.
"What can we do that will take the emergency out of the lake?" asked Ed Fielding, district 2 commissioner for Martin County, one of the areas hit the hardest by the blue green algae.
"The benefits are tempting, significantly reducing as she wary discharges it sounds really good, is it worth the risk of facing unknown impacts down the line? And I think that's what it comes down to," said another woman.
Mark Perry with the Oceanographic Society thinks the deep well injections won't be enough.
"As much as we store north of the lake we also need to have that south of the lake storage. And we are doing our part on the east coast and west coast in those watersheds to have a storage as well," he said.
Nyla Pipes, director of One Florida Foundation, which focus on water issues, said she's impressed with the planning process.
"They are working to get things done as quickly as they can which is remarkable considering the army corps and all of the different agencies involved," she said. "I think that it's important that we look at all the tools in the toolbox and I think that today's meeting demonstrated that they are doing that."
Pipes added, "I know that a lot of people have concerns about deep well injections but here's my thing, we are already polluting the ocean. This could be a solution in the interim until we get some of the other projects and things that will help online."
Verrastro said there is also already similar technology in use across Florida. There are 180 deep injection wells used to dispose wastewater at utility plants, but this type of purpose would be a first.
"This would be sort of an environmental restoration use of deep injection wells which I don't believe has been done at least in Florida, if not the country," he said.
This idea is all still in the early planning stages and is still at least two years away from any type of approvals.
Copyright 2017 Scripps Media, Inc. All rights reserved. This material may not be published, broadcast, rewritten, or redistributed.