2 men accused of kidnapping, attempting to extort $2.5 million from woman in Palm Beach 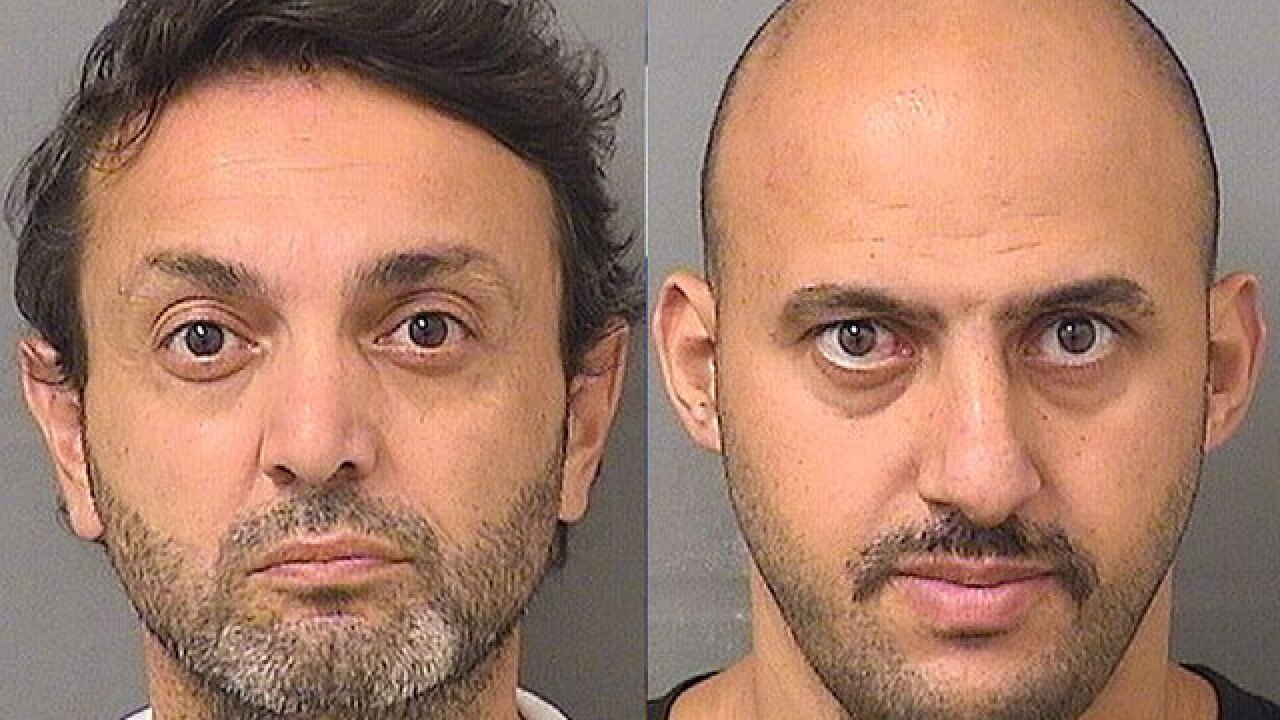 PALM BEACH, Fla. -- Two men have been arrested and accused of assaulting, kidnapping, and attempting to extort $2.5 million from a woman in Palm Beach.

On Monday, Aug. 27 at approximately 10:11 a.m., Palm Beach police were dispatched to Sabadell United Bank on Royal Palm Way in reference to a suspicious person incident.

911 operators spoke with the victim, a 59-year-old woman, who stated she was kidnapped, battered, a gun was held to her head and she was forcibly driven to Sabadell Bank to withdraw money from her account to give to her captors.

The victim says she was able to escape from her captor and lock herself inside a conference room inside of the bank.

The woman identified two men, 45-year-old Mustafa Gencoglanoglu and 38-year-old Murat Ekdi, as the individuals that kidnapped her, beat her and took her to the bank.

The victim described the suspect's vehicle as a white Ford SUV. Approximately 5 minutes after the 911 call, officers spotted a white Ford Explorer SUV traveling northbound on South County Road at a high rate of speed. Officers stopped the vehicle and took both men into custody. A search of the vehicle revealed a handheld stun gun and a black plastic mask, according to police.

A Palm Beach Police Detective met with the victim at the hospital where she provided a detailed interview.

The victim says she has known Gencoglanoglu for approximately one year. He asked her to drive him to the Mangonia Park train station so he could take the train to the Miami airport.

According to the woman, upon their arrival at the train station, Gencoglanoglu held her by her arm against her will and did not let her exit the vehicle.

She says he used a handheld stun gun and shocked her several times on her arm, neck and head area. He ordered her to lay flat over his lap while he drove away and covered her eyes with red fabric, she said.

Upon arrival at an undisclosed location, the victim said Gencoglanoglu met with Ekdi, who was wearing a black mask and black gloves to conceal his identity.

She says the men battered her with a stun gun and punched her about her body with their fists.

At one point, she said she was advised to hold Ekdi's handgun. She was told that the handgun was used to commit two murders earlier that week and by putting her hands on the gun, she would now be implicated in the crime.

She says both men told her that if she did not obey their orders that they would call the police and submit the gun as evidence with her DNA and fingerprints.

The victim says she told both men that she would do whatever they wanted.

She says Gencoglanoglu told her they wanted to go to the bank and withdraw $4 million. The victim says she told the men she did not have that amount but would be able to give them $2.5 million. She says both men agreed to those terms and drove her to Sabadell United Bank in Palm Beach.

Upon arrival at the bank, she says Edki waited outside and Gencoglanoglu accompanied her inside. She says Gencoglanoglu had advised her to have the bank teller transfer $2.5 million to an offshore account.

Once inside the bank, the victim advised Gencoglanoglu to sit in the waiting area while she talked to the teller. She says Gencoglanoglu told her to hold his cell phone and show the bank teller the account number and routing number for the money transfer.

Once she was alone with the teller, the victim revealed that she had been kidnapped and asked to be hidden because she feared for her life. The teller immediately took the victim into a conference room within the bank which she knew could be locked from the inside.

Gencoglanoglu observed the commotion and exited the bank in a panic, police say.

Both men were charged with kidnapping, attempted robbery with a firearm, aggravated battery, extortion, and aggravated assault with a deadly weapon.