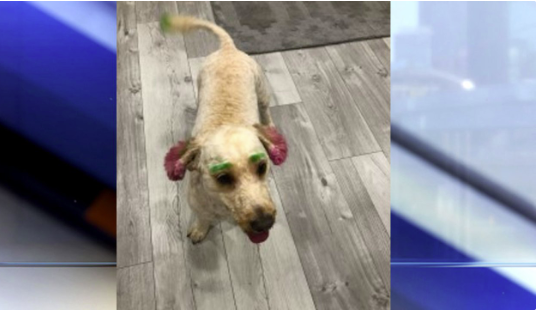 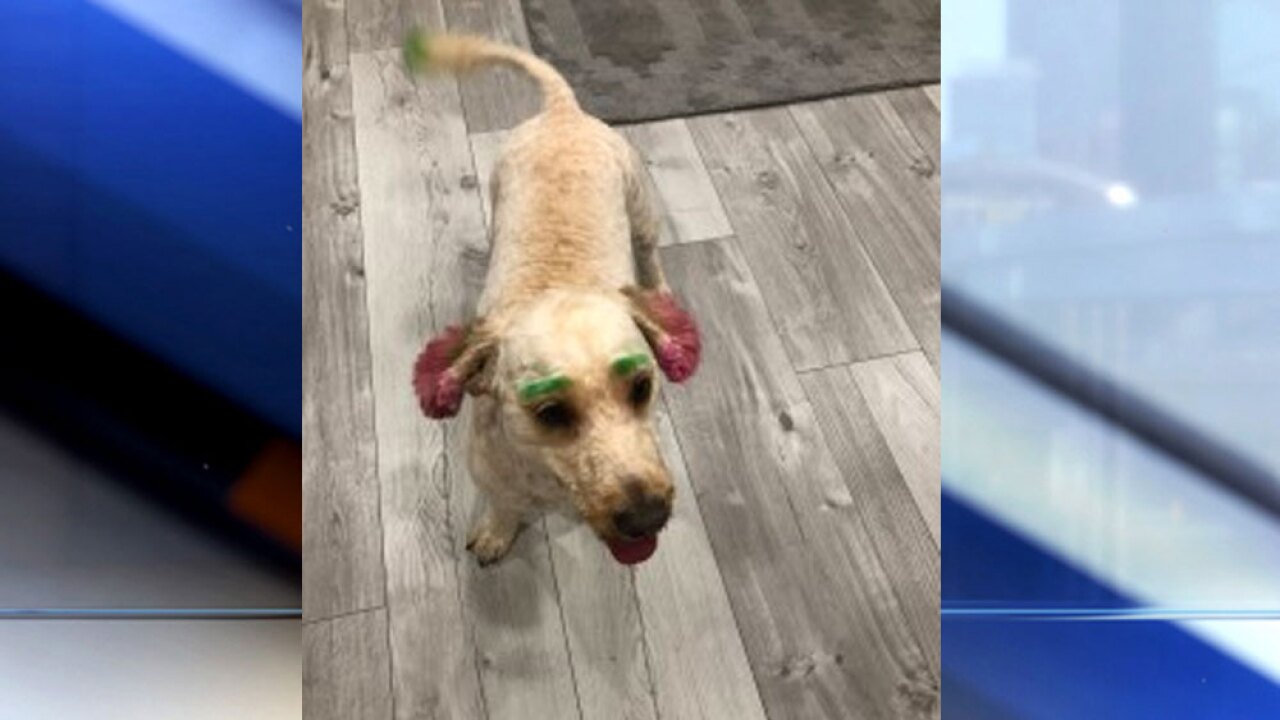 LAKE WORTH BEACH, Fla. — A Lake Worth Beach woman is still in shock after taking her dog to a recent groomer for a visit.

Graziella Puleo intended for her dog Lola, a Golden Retriever and poodle mix, to get a buzz cut, teeth cleaned, nails trimmed and ears cleaned. Instead, Lola came out with dyed green eyebrows and pink ears.

“I heard about the groomers through a friend of a friend who takes their dog there,” she said. “Before taking Lola there, I searched up the place and found all their great reviews.”

The salon offers dog pick-up since they moved locations, so the dog went in at 11 a.m. and was told the dog would be dropped back off when she was done.

“Around 2:30 p.m., I messaged her and asked when Lola would be ready and she texted me back saying 6 p.m.” said Puleo. “Around 6:48 p.m., I texted her again asking when Lola was going to be dropped off, she called me and said her drivers car broke down and I would have to pick her up. Since I had to take my mother home from the hospital, I didn’t make it to the groomers until 8 p.m.”

When Lola walked out, Puleo said she was shocked to see more than she expected.

“I saw my dog come out the back room with green eyebrows and pink ears,” she told WPTV. “I asked the groomer if the dye was going to come out and she said yes. I paid and just quickly rushed my dog out of there to take her home. I didn’t see all the marks on her until I inspected her at home. When I bathed her, the dye only faded, it did not come out. It is still in her hair till this day.”

Puleo said Lola's nails were not finished and the teeth were not cleaned because the groomer said the dog was not cooperative. She got a refund the next day and was offered complementary grooming for next visit, but she declined.

“When I asked why she dyed her hair, her response was she felt the dog was missing something. She offered to take it off for me but I just wanted to take my dog home,” she said.

Adding to the frustrations, Puleo said her dog got a bad infection on her underside following the visit.

“I had to rush my dog to the vet because the infection got worse,” she said. “The vet said she got the infection from her having the open wound and bacteria getting into it.”

WPTV reached out to Amores Pet Salon, which said the incident was a misunderstanding.

Owner Raquel Adams said the dye job was only meant as a nice gesture when she heard the customer’s mother was in the hospital.

“We just wanted to make her smile,” she said by phone.

But Puleo hopes something like this doesn’t happen again. Lola’s fur is still dyed, which her veterinarian said will have to grow out on its own.

“For other dog owners, love and care for your pets unconditionally. They may not live throughout your whole life, but you are their whole life,” said Puleo. “When taking your dogs to the groomers, do extra research.”