Bomb squad investigates threat after bank robbery in Lake Worth 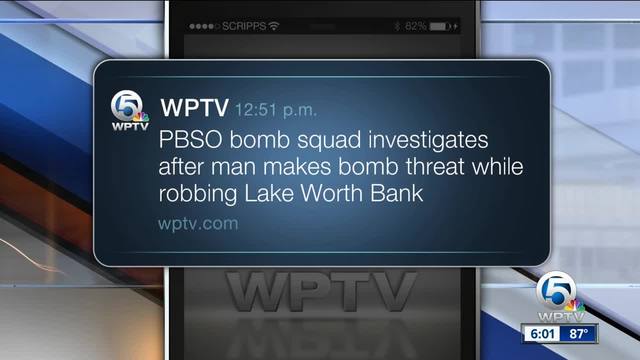 Deputies investigated a bomb threat following a bank robbery in Lake Worth on Saturday.

LAKE WORTH, Fla. -- Deputies investigated a bomb threat following a bank robbery in Lake Worth on Saturday.

The Palm Beach County Sheriff's Office (PBSO) says a man entered the Wells Fargo bank in Lake Worth just before noon and passed a note to the teller indicating he had a bomb in his bag and was robbing the bank.

After he fled the bank, deputies apprehended him nearby.

Because of the bomb threat, the Palm Beach County Sheriff's Office set up a perimeter and the bomb squad investigated the scene.

PBSO says there was no threat found in the search for an explosive device and the scene was cleared.