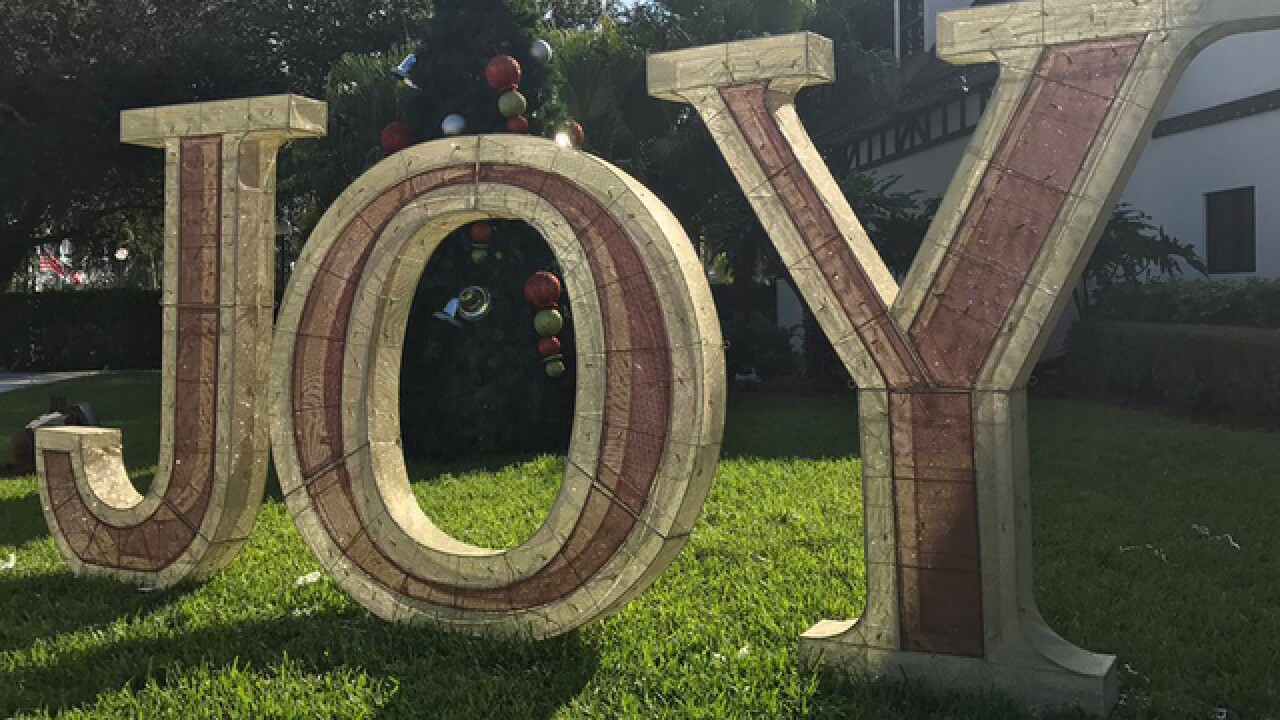 The store has now hired extra security to watch the grounds. PBSO is still investigating who stole the sign.

Hoffman's Chocolates is gearing up to open its 26th annual Winter Wonderland Saturday in Greenacres.

Thousands of families turn out every year. But this year, a Grinch has arrived and stolen the "joy" out of the Christmas display.

Around 10:50 p.m. on Wednesday thieves took a huge sign, which said joy, from the front of the Hoffman's location on Lake Worth Road.

The company said they just put the sign up days ago.

"It's very disappointing," said Randall Vitale, regional vice president for Hoffman's Chocolates. "I have no idea what somebody would want with a sign like this. It's really difficult to think about where they would put it."

The 6 foot by 10 foot electric sign, which stood next to an even larger Christmas tree, was dragged off the front lawn. The suspects even ripped nearly 30 stakes out of the ground and cut through several pieces of rope to steal the sign.

Customers are baffled. "Why would someone do this? Steal joy?" said regular Noe Ramirez.

"It's sad that it happened but maybe it will bring some awareness to some of things that happen during this time of year," said James Cichewicz, who grew up going to the yearly Hoffman's Christmas display.

There's very little evidence left at the scene which is why Hoffman's hopes a chocolate reward can stir up some tips.

"If anyone can bring it back with no questions asked, that's OK. Or if anyone has information on it's successful return, we'll have a very sweet reward for them," said Vitale, who didn't specify exactly how much chocolate will be given as the reward.

Hoffman's is also starting a social media movement called  #FindJOY in an effort to located the sign and spread some positivity for the season.

"We feel bad that this happened but we're going to make the best of it and encourage everyone find joy in everything that they do," said Vitale.

Despite this holiday downer, Vitale said Hoffman's still has enough joy to go around when winter wonderland kicks off this Saturday.

"Having this sign not be a part of [the show] is not going to slow us down at all," he said.

Authorities are investigating the case. If you see the Joy sign in someone's yard or home, please call the Palm Beach County Sheriff's Office at 561-838-5454. You can remain anonymous.

Have you seen this sign? Someone stole it from the @HoffmansChoc Winter Wonderland display! I'll have details @ 4! #FindJOY @WPTV pic.twitter.com/9vZZSBLSxl