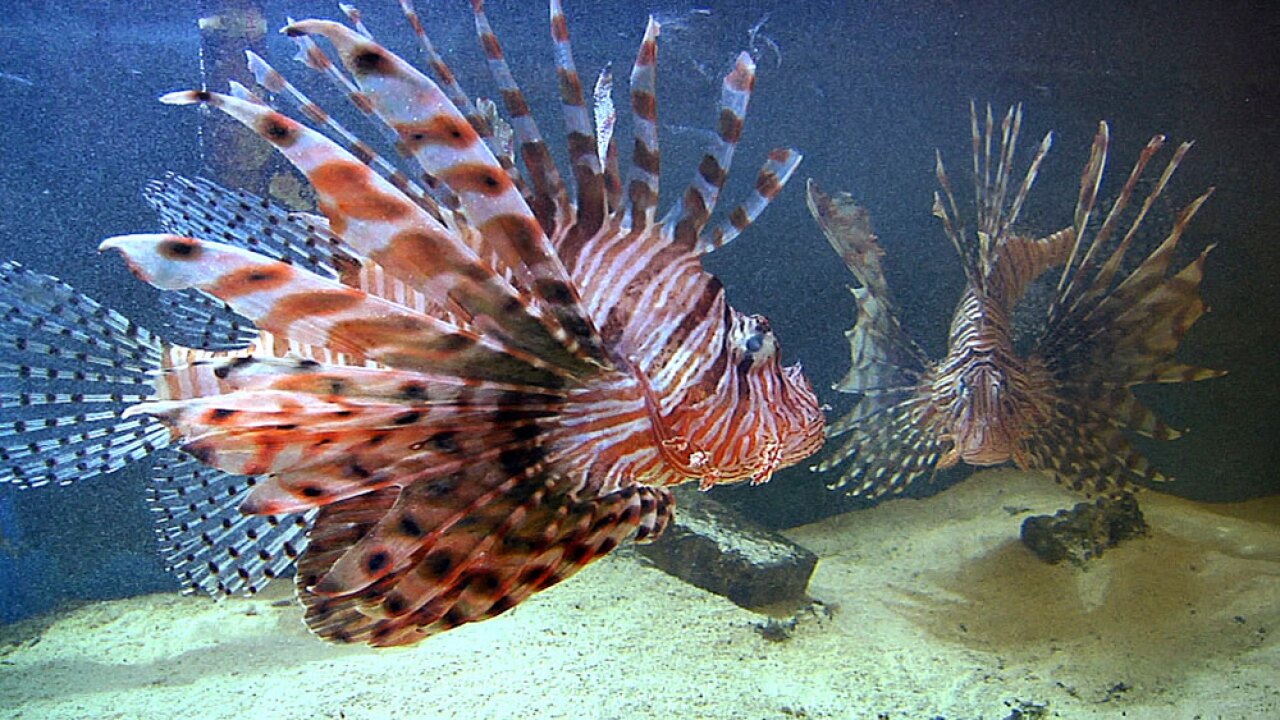 
NEW ORLEANS (AP) -- A new disease has caused open sores that can eat into the muscles of invasive lionfish and appears to have contributed to an abrupt drop in their numbers in the northern Gulf of Mexico, scientists reported Tuesday. But they hasten to say it's probably far from the end of the showy invader with long, venomous spines.

Lionfish may even already be bouncing back, said University of Florida doctoral student Holden Harris, lead author of the article published online in Scientific Reports. Numbers of the smallest lionfish taken by spearfishers were way down in 2018, indicating a possible reduction in spawning, but were rising late that year and in early 2019, he said.

"It's too early, really, to say if that'll become a full population recovery," he said.

It's an interesting development, said Matthew Johnston, a Nova Southeastern University researcher who has written scientific papers about invasive lionfish but had not known about the lesions or population changes. "We've always been wondering if they're ever going to reach their limit in certain locations," he said. "To date it seemed the populations just kept getting larger and larger and larger."

One reason lionfish are a problem outside their native Indo-Pacific is that their hunting method was new to their adopted territory, so their prey hadn't evolved countermeasures. The big-mouthed fish hover over smaller fish, then suddenly gulp them down, swallowing prey up to half their own length. Sometimes they blow jets of water to make small plankton-eaters face them, then vacuum them in. They have few natural predators in the area, where they eat native fish and compete with them for food.

"They've pretty much colonized the entire Caribbean and Gulf of Mexico and up the East Coast of the U.S. up to about Cape Hatteras. But it's just about impossible to estimate how many there are," Johnston said. "They're found very deep and in lots of places we can't look easily."

Researchers measured the Gulf of Mexico changes in a number of ways besides the proportion of little lionfish in spearfishers' totals. They analyzed videos taken by remotely operated underwater vehicles in a 20,000-square-kilometer (7,700-square-mile) area of the Gulf of Mexico that has been regularly surveyed for a wide variety of species since the BP oil spill in 2010. They looked at the weight of lionfish landed in commercial fishing trips and at numbers of fish taken per reef in lionfishing contests.

And by all of those measures, numbers fell in 2017 and 2018. "The magnitudes of the declines were striking," Harris said.

The densities shown in underwater vehicle footage dropped about 75 percent, said coauthor William F. Patterson III, an associate professor of marine fisheries ecology at the University of Florida. Commercial landings fell 52% from 2017 to 2018. And, though lionfish tournament catches rose each year, spearfishers had to hunt more reefs to find them.

Patterson said scientists haven't yet analyzed underwater videos from 2019. Many invasive species have gone through boom-and-bust cycles, he noted.
One of the spearfishers who first brought the lesions to light said lionfish numbers on his hunting grounds have stayed low although the sores seem "pretty much nonexistent now."

Alexander Q. Fogg, a study coauthor and marine resources coordinator for the Okaloosa County, Florida, Board of County Commissioners, regularly catches lionfish to help control their numbers and to sell as food. He said his diving partner, Josh Livingston of Dreadknot Charters, first noticed sick or injured lionfish off artificial reefs near Destin, Florida on Aug. 5, 2017.

"He said he noticed a lot of fish had wounds. I dismissed it," Fogg recounted. But every dive that day brought up fish with lesions. Out of 503 lionfish, 201 had ulcers. Ulcerated fish have since been reported around Florida and throughout the Caribbean.

The University of Florida put a first report about the ulcers online in September 2018.

"We're still trying to figure out what's going on," said Roy P.E. Yanong, of the Tropical Aquaculture Laboratory at the university's program in fisheries and aquatic sciences. Tests for molds, bacteria and viruses didn't indicate a likely culprit, he said.

One problem, he said, is that the sores were open to microorganisms in the water and en route to a lab. Finding fish in a very early stage of the process would probably help, but that itself has been a problem, he said.

Environmental factors could also be a major cause, Yanong said. Other possible causes could include physical trauma and parasite infection, National Oceanic and Atmospheric Administration spokeswoman Allison Garrett said.

"It could be a combination," said Johnston of Nova Southeastern. "They're overcrowded, they're competing for food ... and the gene pool's really shallow." He said genetic studies have shown the invaders are descended from a small number of lionfish. "So if one gets sick they're all susceptible to the same thing."

Lionfish were first sighted off Florida in 1985; aquarium hobbyists may well have started the invasion by dumping fish into the ocean, according to NOAA.
University of Florida's Harris said researchers had two big worries when reporting about the sores: that people might think lionfish were unsafe to eat, and that they might think that nature had ended the invasion.