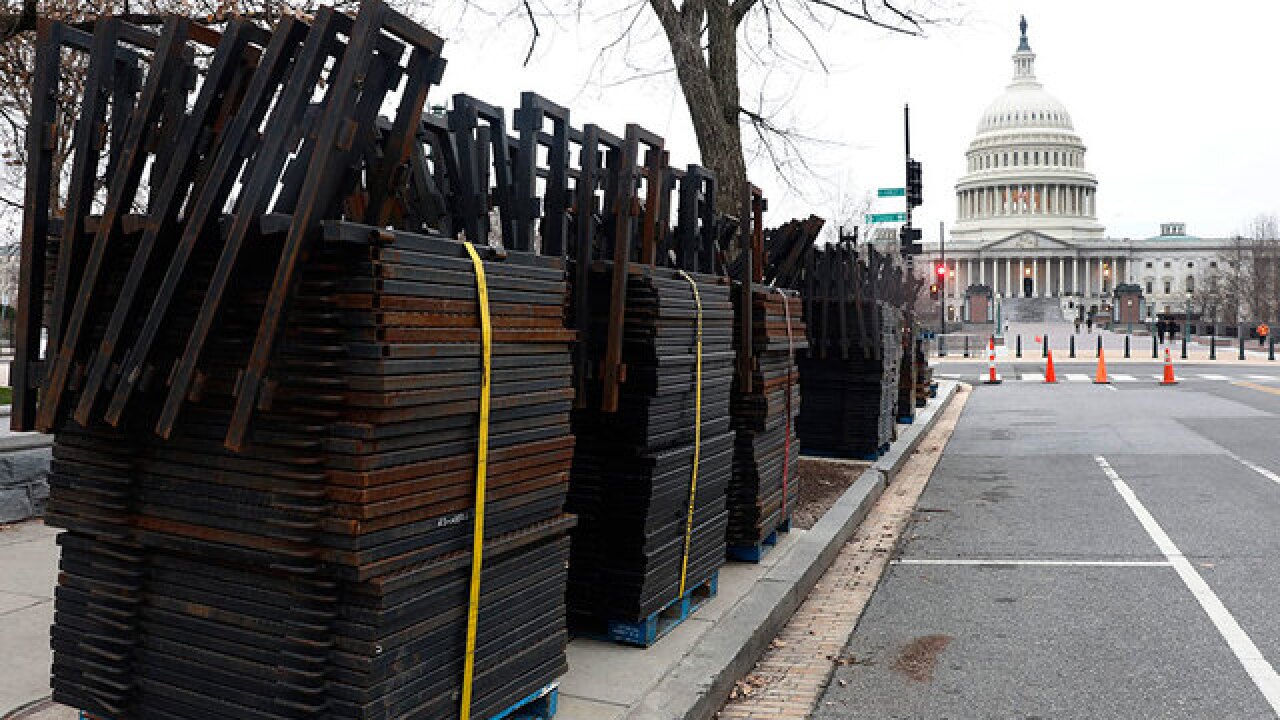 Image copyright 2017 Getty Images. All rights reserved. This material may not be published, broadcast, rewritten, or redistributed.
&lt;p&gt;Stacks of security fencing are seen near the U.S. Capitol in preparation for the inauguration Friday of President-elect Donald Trump. Authorities expect tens of thousands of supporters and protesters to descend on Washington for the ceremony. (Photo by Aaron P. Bernstein/Getty Images)&lt;/p&gt;

Protests at the Republican National Convention in July turned out to have been vastly over-hyped, but inauguration weekend in Washington, D.C., could be just the opposite.

With almost 1 million people expected to converge on the Capital, including multiple groups of anti-Trump protesters, inauguration weekend could see large, organized demonstrations that might even signal the start of a Tea Party-style movement with grass-roots chapters.

“I would say that these are going to be the largest protests of a president’s initial inauguration that we’ve seen in a long time if not all of history,” said Michael Heaney, a University of Michigan political science professor who conducted studies of the protest crowds at the RNC and plans to do the same during inauguration weekend.

This isn’t the first time protest groups have organized for a president’s swearing-in. While both of President Obama’s two inaugurations saw relatively few demonstrations — only a hundred or so people protested topics such as the Iraq War — protest numbers were much larger at President George W Bush’s second inauguration in 2005.

“In 2005 you had probably 10,000 plus protesters. You had sizeable protests.  Anti-war protests were a big issue… there was the ‘Turn Your Back on Bush” protest that went on during the inauguration where people just turned around while he was speaking,” Heaney said.

But the difference there was it was Bush’s second term. Protesters had lots of issues from the first term to target. What is uncommon this time is that so many protesters say they plan to demonstrate against Trump before he has served a day in the Oval Office.

A long list of groups are organizing marches, protests and acts of civil disobedience over the course of inauguration weekend. The largest of them appears to be the nationally organized Women’s March on Washington, which will take place the day after Donald Trump is sworn in. Over 1,200 buses already have applied for city parking the day of the march, 1,000 more than have applied for parking on Inauguration Day. The march, which organizers say could attract up to 200,000 people, isn’t being billed as an anti-Trump event. Instead, its goal is promoting women’s rights and empowerment.

DisruptJ20 also is projected by organizers to be a large demonstration and it will take place on Inauguration Day. Organizers say its express purpose is to disrupt Trump’s swearing-in ceremony to the point where he has to take the oath indoors.

“We do want this to be a very strong disruption, a real effort of resistance,” Lacy MacAuley, a DisruptJ20 organizer, told DecodeDC. “We really want to provide a space for people who feel threatened by Donald Trump’s presidency… We want to give them a place to voice their opposition in a very strong way, in a very real way.”

Many other groups have applied for permits to protest on Inauguration Day or during the weekend. So far only the Women’s March on Washington and another anti-Trump protest group, the ANSWER Coalition, have received them. According to public records obtained by Politico, at least 23 other protest groups also applied for permits, and they aren’t all opposed to Trump. One pro-Trump group on the list of applicants is “Let America Hear Us, Roar for Trump!”

Some groups don’t plan on applying for permits at all, including one D.C.-based group that will protest federal marijuana policies on the National Mall by lighting up joints — jointly.

While it’s impossible to determine exactly how many people will show up on inauguration weekend — to celebrate Trump or oppose him —city and federal law enforcement are preparing for a large turnout. The Washington, D.C., Metropolitan Police Department, the United States Capitol Police, the FBI and the Secret Service have been jointly planning for the inauguration since last summer and say they have plans in place to address “every possibility.”

“There seems to be a lot more focus on this one because of all of the attention around it, and the politics,” said Paul Abbate, assistant director in charge for the Washington FBI field office. “But that’s not our business and we aren’t concerned with that. We go about the work we do, security, safety and protecting people.”

Both representatives for the FBI and Secret Service were quick to mention their plans included strong support for attendee’s rights to protest.

“We are looking at an intel standpoint at anyone who seeks to come in and commit a crime, cause harm, hurt people, commit acts of violence, do anything unlawful. We are on the look out for that to prevent anything from happening. But that’s where it stops. Peaceful protests, the right for people to express themselves, we completely support that,” Abbate said.

The Washington Post reports that along with D.C. police, the city will bring in 3,000 additional law enforcement officers to work the parade route. Also 5,000 National Guardsmen will be in town unarmed and watching over the route. A spokesperson for the Secret Service would not comment on the number of officers who will be working that day.

There also are plans to park heavy construction equipment in strategic locations to prevent truck attacks, such as those that  occurred in Germany and France, Homeland Security Secretary Jeh Johnson announced Friday in a briefing.

Why are there so may protest groups?

The reason why protesters are getting more involved now is twofold.

Heaney explained that during election years, people feel less inclined to protest because they can express themselves by going to the polls. When the election is over, people turn to protests as a way to voice their concerns, especially when there is a surprising outcome in the results.

That’s why Heaney believes the protest turn-out in Cleveland for the RNC ended up being low. “Plus the other thing is other people never thought Donald Trump would be president,” he said.

He added that the real protests against Trump, especially by women, didn’t occur until after the NBC tape was released that caught the then candidate on mic saying he wanted to sexually assault a woman.

“There was significant news that came out after [the convention] that had to do with the treatment of women, the allegations that this man has committed multiple sexual assaults. … . And you did see protests almost immediately after that, at Trump Tower, outside the Trump hotel in D.C,” Heaney said.

Now that there’s no question about Trump moving into the White House, protesters are coming out stronger and Heaney wonders if the Women’s March on Washington in particular could be the start of a movement along the lines of the Tea Party — which started in the wave of Obama’s push for the Affordable Care Act in 2009.

“I think there are some signs that it could be the beginning of a new movement, they’ve organized on a state-by-state basis. Instead of having one big march and saying everyone show up, they are trying to organize based on chapters,” he said. “It seems to be that this has got quite a bit of promise — not a guarantee that the women’s movement has been reborn — it could just as easily be a new wave as a flop, but I would say it has substantial promise and I think the organizers have done a reasonably good job getting it started.”

Women’s marches are planned on the same day in cities across the country — the question is whether the message will continue to resonate during Trump’s time in office.