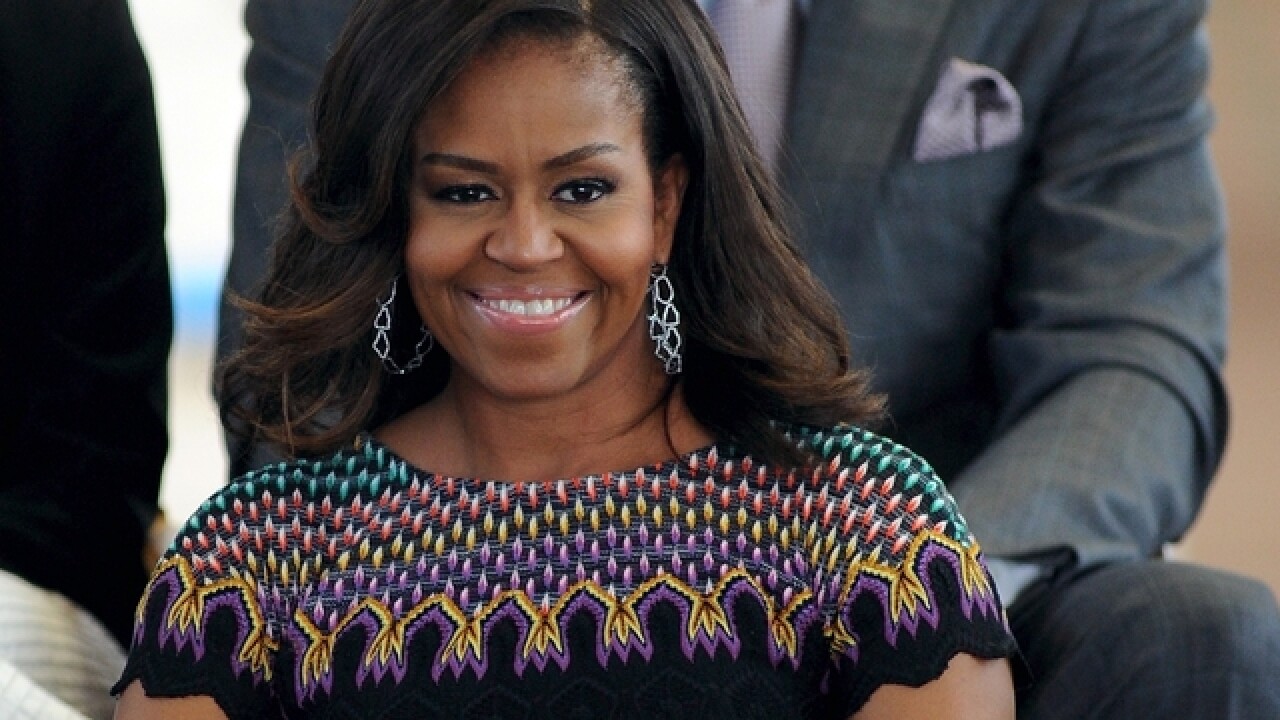 CLAY, W.Va. (AP) — A West Virginia mayor resigned Tuesday following a backlash after she posted a response to a racist comment about first lady Michelle Obama on Facebook.
The Clay Town Council accepted Mayor Beverly Whaling's resignation in a meeting late Tuesday afternoon and said it would act quickly to name a replacement for the remaining three years of her term.
The resignation came after another woman whose racist post Whaling responded to was placed on leave as director of the Clay County Development Corp.
Council member Jason Hubbard issued a brief statement condemning the "horrible and indecent" post and said racism and intolerance "isn't what this community is about." He apologized on behalf of the town to Michelle Obama and anyone who was offended.
"This community is a helpful, hopeful, empathetic and God-loving community," Hubbard said. "Please don't judge the entire community for one or two individual acts."
Clay County Development director Pamela Ramsey Taylor made the post following Republican Donald Trump's election as president, saying of incoming first lady Melania Trump: "It will be refreshing to have a classy, beautiful, dignified First Lady in the White House. I'm tired of seeing a Ape in heels."
Whaling responded: "Just made my day Pam."
Town council member Joyce Gibson said that after news of the post circled the globe, the small office's voicemail system quickly filled to capacity with irate callers.
An online campaign calling for Taylor and Whaling to resign drew tens of thousands responses.
Gibson wants anyone who judges the town to "come see us. Spend a day with us."
The nonpartisan town council has five members, plus the town recorder and mayor. Whaling's seat was empty during the meeting in a small office attended by a few local residents along with several journalists and some people from outside the area who wanted to see justice served.
Annie Thacker of Barrackville drove 117 miles to the meeting.
"I saw what was happening in small town West Virginia," she said. "I'm from small town West Virginia. I wanted to see hate put down in West Virginia, especially after this election cycle. Everyone's watching."
Lish Greiner of Belpre, Ohio, said she had volunteered during flood cleanup in West Virginia over the summer and returned for the town council meeting because "I will not tolerate hate in my home and in my area."
Whaling earlier issued a written apology to news media outlets saying her comment wasn't intended to be racist.
"I was referring to my day being made for change in the White House! I am truly sorry for any hard feeling this may have caused! Those who know me know that I'm not in any way racist!"
Taylor, who told WCHS-TV on Monday night that she was put on leave, did not return a call seeking comment.
The nonprofit Clay County Development Corp. provides services to elderly and low-income residents in Clay County. It is funded through state and federal grants and local fees. It is not affiliated with the town of Clay, which is about 50 miles east of Charleston.
The uproar occurred as the town of about 500 residents is still trying to recover from severe flooding in late June along the nearby Elk River. Clay County also has been hit by hundreds of layoffs in the coal industry this decade.
Gibson was asked what was worse, the flood or the backlash from the Facebook post.
"I'll have to think about that," she said. "This (backlash) will go away."
Last week in Kentucky, Republican Dan Johnson won state House of Representatives seat from Bullitt Count despite a series of posts he put on Facebook depicting President Barack Obama and his wife as monkeys.
And last month in West York, Pennsylvania, the town council accepted the resignation of Republican Mayor Charles Wasko after an uproar over racist posts on his Facebook page, including two depicting apes with captions referring to Barack Obama and his family.
Copyright 2016 The Associated Press. All rights reserved. This material may not be published, broadcast, rewritten or redistributed.