TRENTON, Fla. — Two deputies in Trenton, Florida were killed in the line of duty on Thursday.

Around 3 p.m., two Gilchrist County Deputy Sheriffs were eating inside  Ace China restaurant in downtown Trenton, when a man went inside the establishment, assaulted and killed the two deputies.

According to the Sheriff’s Office, when fellow deputies responded to the scene, they found Sgt. Noel Ramirez, 29, and Deputy Taylor Lindsey, 25, deceased inside the restaurant.

"Our deputies were ambushed. They were unable to return fire," GCSO said in a release Friday.

The suspect was found deceased in his vehicle, parked at the business, from what appears to be a self-inflicted gunshot.

"At this point, it remains an active criminal investigation with no apparent motive or indications as to why this tragedy occurred," the Gilchrist County Sheriff's Office wrote in a press release.

GILCHRIST COUNTY SHERIFF'S OFFICE has suffered a terrible tragedy. Please avoid the area of SR 26 from the red light to the area of subway. No suspects are at large. Further updates will be posted later.

Sgt. Ramirez, a 7-year veteran, had been with GSCO for about two years and was recently promoted to Sergeant. He leaves behind a wife and two young children. 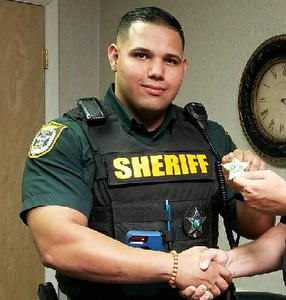 Deputy Lindsey had been with the GCSO for three years. He was not married but leaves behind his girlfriend, the sheriff's office said in a press conference Thursday.

The deceased suspect has been identified as John Hubert Highnote, 59, of Bell. No further information on the suspect has been released at this time. The Florida Department of Law Enforcement is conducting the active, ongoing criminal investigation.

"It is true evil for anyone to hurt a law enforcement officer, and in Florida, we have zero tolerance for violence, especially against the police," Florida Governor Rick Scott said in response to the shooting. "Tonight, I ask every Floridian to honor these law enforcement officers, their brothers and sisters in uniform and their families. May God bless those who work to keep our communities safe.”

Later in the evening, President Donald Trump tweeted his condolences.

My thoughts, prayers and condolences are with the families, friends and colleagues of the two @GCSOFlorida deputies (HEROES) who lost their lives in the line of duty today.

CPD's thoughts are with our law enforcement partners and family in #GilchristCounty after two deputies were shot and killed in #Trenton.

Our thoughts and prayers are with our colleagues in @GCSOFlorida and the families of the fallen deputies. https://t.co/i3bAYksUWk

Heartbroken to hear of the two deputies with the Gilchrist County Sheriff's Office that were killed in the line of the duty today.

Thinking of the deputies' families, friends, and everyone at @GCSOFlorida. 🖤💙🖤