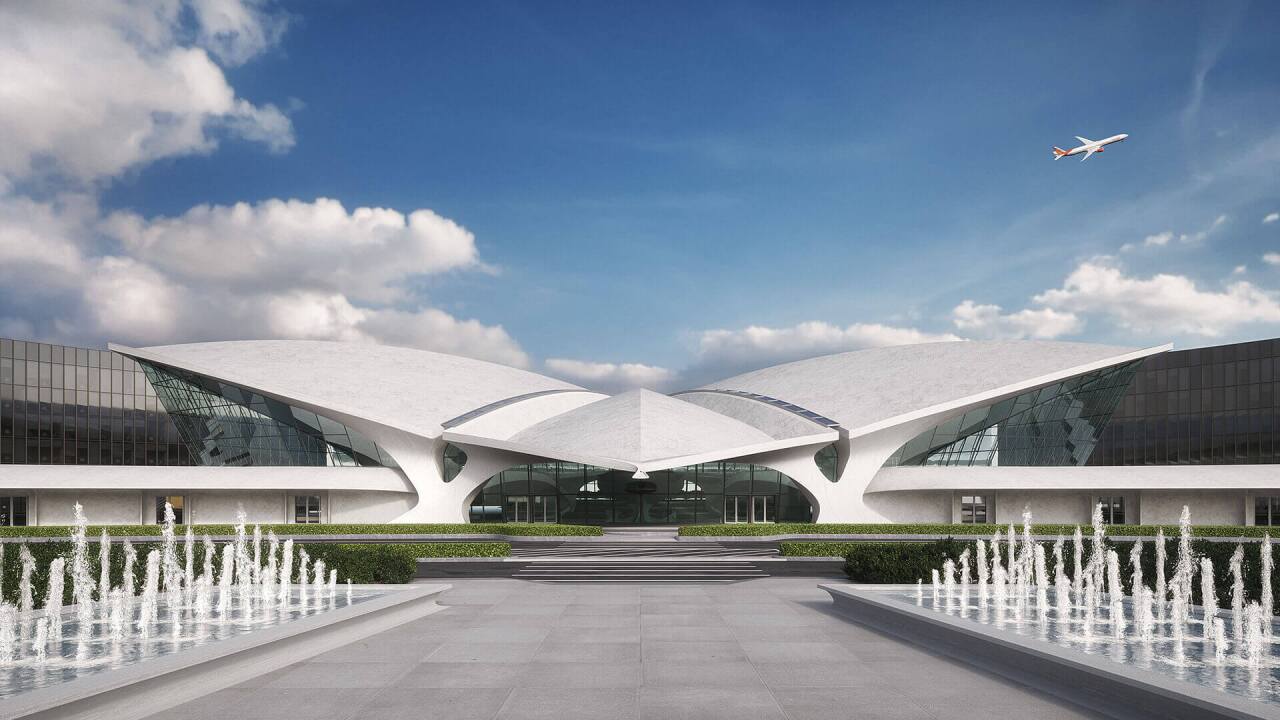 Trans World Airlines (better known as TWA) commissioned groundbreaking Finnish American architect Eero Saarinen to design its JFK terminal in 1962. Following the airline's closure in 2001 many questions remained about what would happen to the swooping white building.

Now, it has a new and exciting second life as JFK's only on-site airport hotel, with 512 rooms and some 50,000 feet of meeting and event space.

The hotel is opening to its first-ever guests today.

Visitors can choose a room that overlooks an active JFK runway -- perfect for aviation fans who want to watch planes take off -- or one that looks into the hotel itself, a good choice for design fans who just can't get enough.

The hotel has been on the radar for a while, with the TWA team dropping several exciting hints and previews, from a model hotel room to the TWA Lounge on the 86th floor of One World Trade Center in downtown Manhattan.

In October 2018, a Lockheed Constellation L-1649A Starliner traveled 300 miles to become the hotel's bar. Nicknamed "The Connie," it has become one of the hotel's bars, where retro drinks like Rum Swizzles are on offer.

Even more plush? There's a rooftop infinity pool with views of the runways.

Inside the terminal-turned-hotel, things have changed while also staying the same.

The classic red-and-white TWA branding is everywhere, from spiffy amenity kits to bathrobes, sneakers and enamel pins. (Don't worry if you can't make it -- there's an online shop too.)

"Trendy" and "near the airport" are no longer mutually exclusive, as this is the first hotel on JFK's grounds -- no taxi required.

This is good news for architecture buffs and for preservationists alike, since there had been rumors that the long-empty terminal was going to be razed.

Until now, few visitors had been able to access the TWA Terminal following its closure -- just the occasional lucky traveler who was able to snag a ticket to an event through New York City's annual Open House Weekend.

"From the moment guests and visitors arrive at the TWA hotel, they will find themselves immersed in the ethos of 1962's rich culture, architecture, sights, sounds and ambiance," Tyler Morse, CEO of MCR and MORSE Development, the developer and lead investor of the project, told CNN Travel in 2018.

"The attention to the smallest of details permeates the entire guest room experience, paying homage to the magnificent landmark and special time in American history."

It also doesn't hurt that mid-century design is having (another) moment thanks to shows like "Mad Men."

Still, don't expect the hotel to feel too much like a period piece: There are plenty of spots to charge your phone, which is practically required at a place so ready for Instagram.