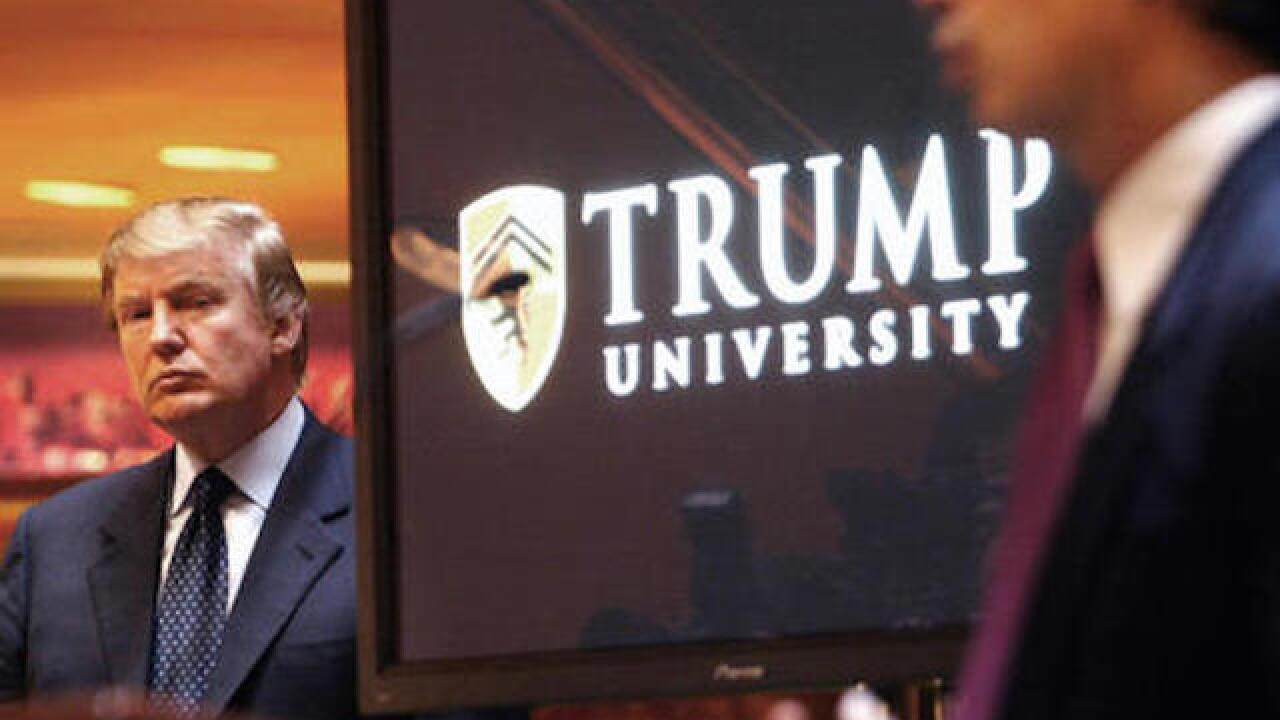 &lt;p&gt;FILE- In this May 23, 2005, file photo, real estate mogul and Reality TV star Donald Trump, left, listens as Michael Sexton introduces him at a news conference in New York where he announced the establishment of Trump University. Tarla Makaeff a yoga instructor, has had enough of Trump after six years fighting him in court. Makaeff, wants to withdraw from a federal class-action lawsuit that claims Trump University fleeced students with an empty promise to teach them real estate. (AP Photo/Bebeto Matthews, File)&lt;/p&gt;

SAN DIEGO (AP) — Tarla Makaeff has had enough of Donald Trump after spending six years fighting him in court.

The Southern California yoga instructor wants to withdraw from a federal class-action lawsuit that says Trump University fleeced students with an empty promise to teach them real estate. Her lawyers said the Republican presidential front-runner and his team have put her "through the wringer" and made the prospect of a trial unbearable. A judge will consider the request Friday, four days before Florida and Ohio hold their primaries.

Trump's attorneys say the lawsuit should be dismissed if Makaeff is allowed to withdraw, arguing that their trial strategy centers on her. They deposed her four times and identify her as "the critical witness" in a court filing.

Makaeff's attorneys say Trump's argument that their client is indispensable to the billionaire's defense "is illogical to the point of being nearly incomprehensible." They note the judge allowed two plaintiffs to withdraw last year; three others would remain.

The tussle in one of three lawsuits against Trump University comes as the case nears trial, possibly this summer. A trial date has not been set, but a final pretrial conference is scheduled for May 6 and Trump appears on a list of defense witnesses who may testify at trial.

The lawsuit has figured prominently in the presidential campaign, fueled by legal filings and Trump's statements. In depositions that took place in December and January and were released last week, Trump acknowledged that he never met instructors whom his marketing described as hand-picked, and that some unqualified candidates had "slipped through the cracks."

The Better Business Bureau said Tuesday that it rated Trump University a D- in 2010, which improved to A+ by January 2015 as the business appeared to wind down and older complaints automatically rolled off its books.

Trump sued for defamation, seeking $1 million. Makaeff prevailed on appeal, and a judge last year ordered Trump to pay $798,779 in her legal fees.

Trump and his attorneys are trying to frame much of their case around Makaeff, saying she gave instructors high marks in surveys after the courses.

"The reason they want her out of the case is she is a horrible, horrible witness. She's got in writing that she loves it. And I could have settled it and when I saw her documentation ... Why would I give her money? Probably should have settled it, but I just can't do that. Mentally I can't do it. I'd rather spend a lot more money and fight it," Trump said at a rally in Arkansas last month, according to a transcript.

In last week's Republican debate, Trump said Makaeff wants to withdraw "because it's so bad for her."

"She simply did not put in the time, work, and perseverance necessary to achieve success," Trump's lawyers wrote the judge last month.

Makaeff's attorneys say the yoga instructor was unaware of Trump's "false advertising" when she filled out the surveys and didn't want to risk alienating anyone who might advance her career.

Makaeff didn't imagine she would be subjected to criticism under the glare of a presidential campaign, her attorneys say. She has been deposed for a total of nearly 16 hours and suffered anxiety about finances while Trump sued her for defamation.

"Understandably, Makaeff wants her life back without living in fear of being disparaged by Trump on national television," they wrote in a court filing last week.

Makaeff declined to comment through an attorney. In a statement to the court, she said she was grieving her mother's death.

"I am very concerned about the toll that the trial would take on my emotional and physical health and well-being," she wrote.

Trump has also addressed criticism of the lawsuit by pointing to the judge's ethnic background. Asked on "Fox News Sunday" last month what U.S. District Judge Gonzalo Curiel's ethnicity has to do with the case, Trump replied: "I think it has to do perhaps with the fact that I'm very, very strong on the border, very, very strong at the border, and he has been extremely hostile to me."

Curiel, who was nominated by President Barack Obama and joined the bench in 2012, declined to comment on Trump's remarks.