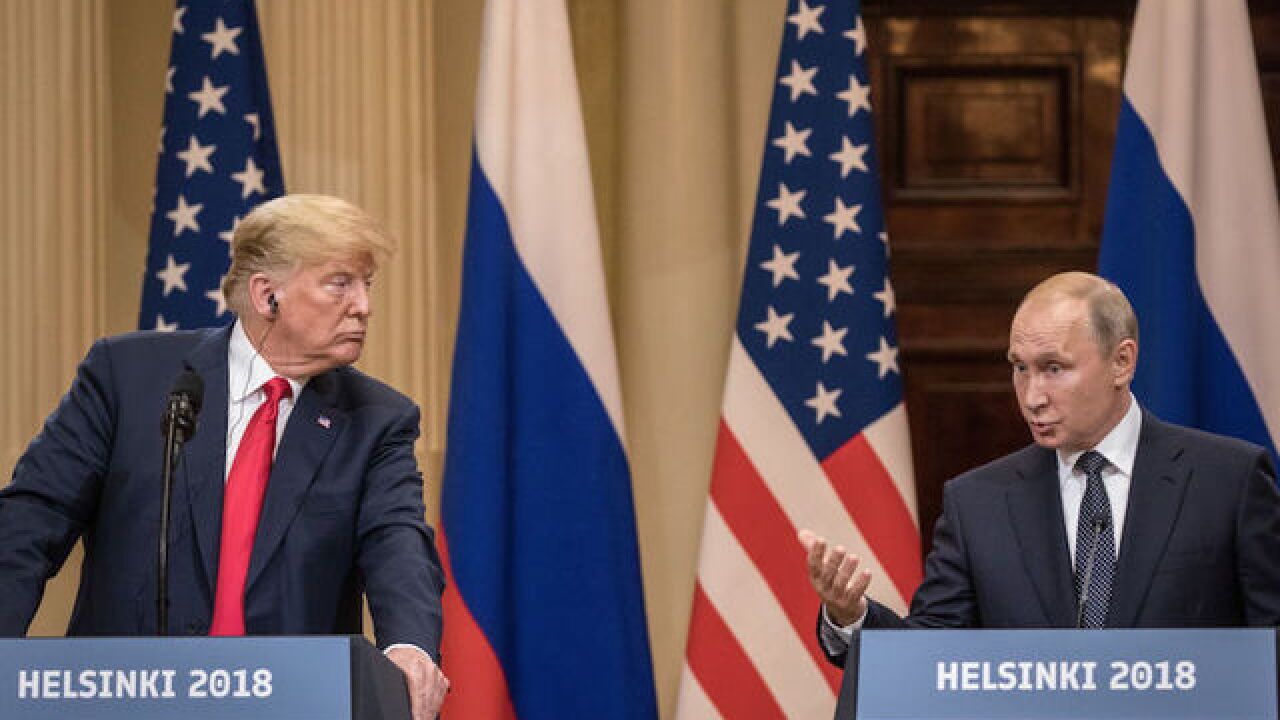 Image copyright 2018 Getty Images. All rights reserved. This material may not be published, broadcast, rewritten, or redistributed.
&lt;p&gt;U.S. President Donald Trump (L) and Russian President Vladimir Putin answer questions about the 2016 U.S Election collusion during a joint press conference after their summit on July 16, 2018 in Helsinki, Finland. The two leaders met one-on-one and discussed a range of issues including the 2016 U.S Election collusion. &lt;/p&gt;

President Donald Trump was upbeat immediately after his news conference with Vladimir Putin in Helsinki, Finland, but by the time he returned stateside, his mood had soured considerably amid sustained fury at his extraordinary embrace of the Russian leader.

Now, his aides are wondering how he'll respond to anger from even his staunchest supporters after he sided with Putin over US intelligence agencies investigating Russian interference in the 2016 election.

Trump's first response to the firestorm came Tuesday morning on Twitter, when he thanked Sen. Rand Paul, a Kentucky Republican, who had defended Trump on CBS earlier in the morning, saying he's been the focus of a "partisan investigation" over Russia and that the President is "sensitive to that."

"Thank you @RandPaul, you really get it! 'The President has gone through a year and a half of totally partisan investigations - what's he supposed think?'" the President tweeted, though Paul didn't ask such a question in the CBS interview.

Trump's initial response on Tuesday, however, was unlikely to quell the uproar caused by Monday's news conference.

The conservative editorial page of The Wall Street Journal declared the news conference "a personal and national embarrassment" for the President, asserting he'd "projected weakness." Newt Gingrich, ordinarily a reliable voice of support, wrote on Twitter the remarks were "the most serious mistake of his presidency."

Immediately after his news conference, Trump's mood was buoyant, people familiar with the matter said. He walked off stage in Helsinki with little inkling his remarks would cause the firestorm they did, and was instead enthusiastic about what he felt was a successful summit.

By the time he'd returned to the White House just before 10 p.m. ET on Monday, however, his mood had soured. Predictably, the President was upset when he saw negative coverage of the summit airing on television aboard Air Force One. It was clear he was getting little support, even from the usual places.

He vented to aides traveling with him, including new communications chief Bill Shine and policy aide Stephen Miller. First lady Melania Trump was also aboard and was involved in some of the discussions, but not all of them, the people familiar with the matter said.

Trump, the first lady, Shine and Miller were seen in animated conversation aboard Marine One when they arrived to the White House South Lawn on Monday evening.

A day later, aides are still wondering what the ultimate fallout will be, including whether any senior officials will resign. Those who were not on the trip are waiting to debrief their colleagues later in the day about what transpired behind the scenes. All are nervously watching Twitter to see if the President attempts further cleanup beyond his tweet after the event Monday when he said he has "GREAT confidence in MY intelligence people."