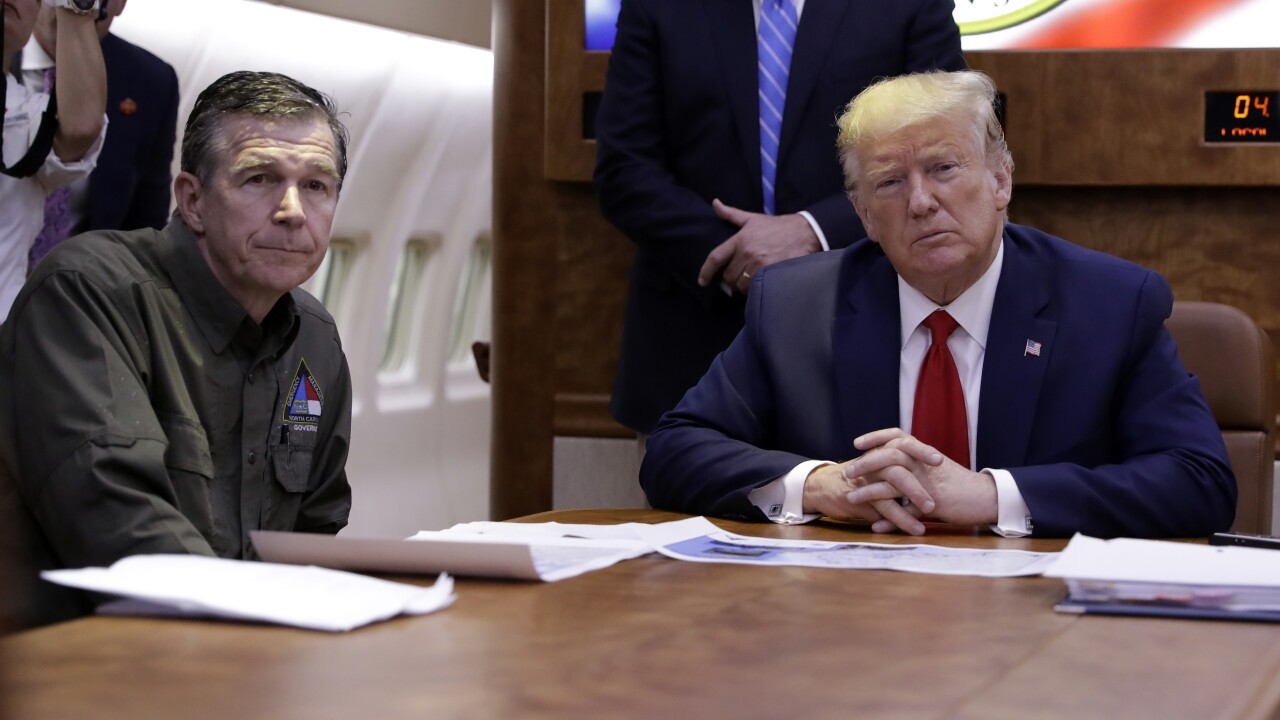 RALEIGH, N.C. (AP) -- President Donald Trump said he is seeking a new state to host this summer's Republican National Convention after North Carolina refused to guarantee the event could be held in Charlotte without public health restrictions to contain the coronavirus pandemic.

Trump announced the news via tweet Tuesday night, complaining that Gov. Roy Cooper, D-N.C., and other officials were not "allowing us to occupy the arena as originally anticipated and promised."

"Because of @NC--Governor, we are now forced to seek another State to host the 2020 Republican National Convention," he wrote.

Some convention business probably will take place in Charlotte, due to existing obligations. But Trump will not accept renomination in the city, according to one RNC official, who was not authorized to discuss the matter publicly and spoke on condition of anonymity.

Trump and the RNC had demanded that the August convention be allowed to move forward with a full crowd and that participants not have to wear face coverings. Those demands raised concerns in a state that is facing an upward trend in its coronavirus cases, with about 29,900 cumulative cases and 900 deaths as of Tuesday. About 700 COVID-19 patients are hospitalized, and Charlotte's Mecklenburg County has been a hot spot, with nearly 100 deaths.

"We have been committed to a safe RNC convention in North Carolina and it's unfortunate they never agreed to scale down and make changes to keep people safe," Cooper tweeted in response to Trump's announcement. "Protecting public health and safety during this pandemic is a priority."

A traditional GOP convention brings together roughly 2,500 delegates, the same number of alternate delegates and many times more guests, journalists and security personnel. Officials in both parties have been preparing contingency plans for months given the uncertainty and dangers posed by the virus and evolving restrictions on large gatherings meant to slow the spread.

Trump's announcement came after a call with Cooper on Friday in which the president pressed his demands. When Trump "insisted on a full convention arena with no face coverings and no social distancing, the governor expressed concerns and suggested a scaled back event with fewer attendees," Cooper spokeswoman Sadie Weiner wrote in an email. "They agreed to continue talking about ways to have a safe convention in Charlotte."

But Cooper made clear to Trump that those conditions would likely be impossible to accommodate. Cooper formalized that Tuesday in a letter to the RNC, before the Wednesday deadline set by the GOP for assurances from Cooper that he would allow a full-scale event in August.

The RNC's leader, Ronna McDaniel accused Cooper of "dragging his feet" on giving them guidance for proceeding with convention plans. While the party would like to hold its event in Charlotte, she said, "we have an obligation to our delegates and nominee to begin visiting the multiple cities and states" that have reached out to express interest in hosting.

The RNC said it would begin visiting potential alternative sites in the largely GOP-led states that had offered to host the convention. The Republican governors of Tennessee, Florida and Georgia have said they would be interested.

Tennessee's Bill Lee said GOP officials were coming to scout Nashville on Thursday. He called the city "the best place in America to have a convention."

Brian P. Kemp of Georgia tweeted, "Hope you have Georgia on your mind, @realDonaldTrump!"

Changing sites had been seen as difficult for reasons including the contract between GOP officials and Charlotte leaders. In April, the City Council voted to accept a $50 million federal grant for convention security. Before the vote, City Attorney Patrick Baker noted the overall contract requires parties to follow applicable laws and regulations, including Cooper's executive orders. Cooper's current order limits indoor gatherings to 10 people.

Charlotte posted on its Twitter account that it had not received any official notification from the RNC confirming Trump's tweet and that Baker "will be in contact with the attorneys for the RNC to understand their full intentions."

Anderson is a corps member for the Associated Press/Report for America Statehouse News Initiative. Report for America is a nonprofit national service program that places journalists in local newsrooms to report on undercovered issues."