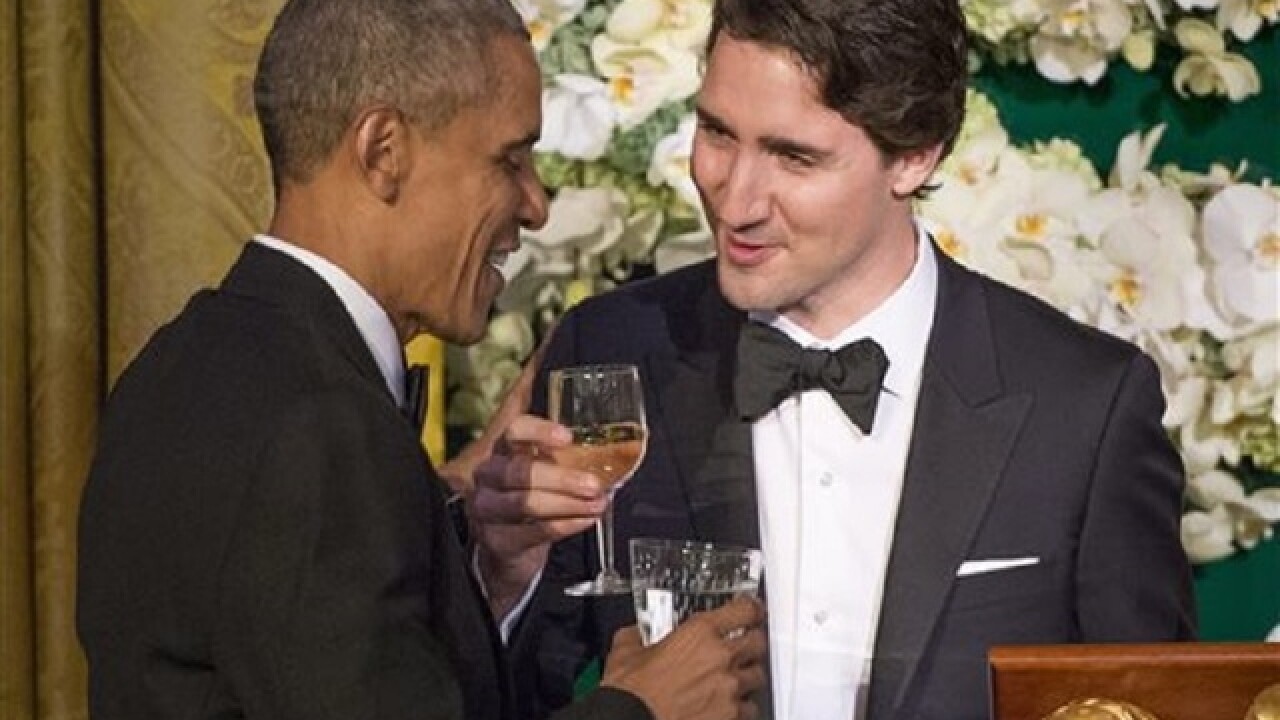 By: Associated Press
Posted at 4:54 AM, Mar 11, 2016
WASHINGTON (AP) — Canadian Prime Minister Justin Trudeau paid tribute to President Barack Obama's daughters at their first state dinner, recalling how he grew up in the spotlight when his dad was prime minister and how he missed state dinners because he was too young.
The boyish-looking, 44-year-old son of late Canadian Prime Minister Pierre Trudeau said it was touching to meet Malia and Sasha Obama and said he wished he had been a teenager when his dad was a world leader. He said he admired their strength and called it a "remarkable childhood and young adulthood that will give you extraordinary strength and wisdom beyond your years for the rest of your life."
Guests at the splashy White House state dinner in Canada's honor were just as impressed with the nation's new leader.
"He's cool," said actor Michael J. Fox, who was born in Edmonton. Fox declared himself a fan of Trudeau's father, whom he described as the "coolest world leader going. He seems to be pretty cool, too," Fox said of the younger Trudeau.
"When I lived in Canada, Pierre Trudeau was my prime minister for 14 years and he's my hero," said actor Mike Myers, who sported a head of snow white hair for his first White House state dinner, the first for Canada in nearly 20 years. "Now I'm thrilled to have his son as my prime minister. I think it's going to be a great time for Canada and a great time for Canadian-U.S. relations."
"I'm extremely proud of Canada," said actress Sandra Oh, formerly of "Grey's Anatomy," who was born in Ottawa, the Canadian capital. "Obviously, he carries the legacy of one of our greatest prime ministers so I'm extremely excited to meet him."
Sen. Patrick Leahy, D-Vt., said he was not the least bit surprised by the hubbub over Trudeau; the senator lives about an hour away from the border.
"He's a breath of fresh air," said Leahy.
Toasting Trudeau, Obama said: "Here in America, you may well be the most popular Canadian named Justin" — a reference to Canadian-born pop star Justin Bieber.
More than 170 guests sporting tuxedos and designer gowns filed in for dinner in the East Room, which was transformed by the addition of cascading arrangements of blooming orchids, hydrangeas and amaranth in shades of green and white intended to evoke the coming of spring — much like Trudeau's election in October has ushered in a new season in Canadian politics.
The guest list featured a hefty dose of Canadian star power from actors Fox, Myers, Oh and Ryan Reynolds, along with "Saturday Night Live" creator Lorne Michaels. Professional sports were represented by the U.S. hockey and basketball commissioners, along with retired NBA player Grant Hill and his wife, Tamia, a Canadian singer. Leahy and a few other Democratic senators were joined by Republicans Susan Collins of Maine and Orrin Hatch of Utah.
Malia, 17, sat with Oh and Sasha, 14, sat with Reynolds and his wife, actress Blake Lively. Mrs. Obama sat with Fox.
Like at previous state dinners, political donors made the guest list, too. Adam Silver, commissioner of the National Basketball Association, contributed $3,500 to Obama's 2012 re-election campaign and $2,700 more recently to Hillary Clinton's 2016 presidential run.
Longtime Obama supporter Irwin Jacobs, founder of the Qualcomm tech firm, also attended. Jacobs gave more than $2 million to a "super" political action committee supporting the president's re-election. The La Jolla, Calif., billionaire also gave nearly $23,000 to Obama's campaign and to the Democratic Party.
First lady Michelle Obama turned again to one of her favorite designers, Jason Wu, who dressed her in a strapless midnight blue floral jacquard gown with asymmetrical draping. Taiwan-born Wu was raised in Canada. Trudeau's wife wore a bright purple dress with coral flower trim by Canadian designer Lucian Matis.
Copyright 2016 The Associated Press. All rights reserved. This material may not be published, broadcast, rewritten or redistributed.