2015 proved to be full of memorable sports moments, all the way from the Super Bowl in February to the World Series in November. But which moments will stand the test of time?

There aren't many that would dispute that Serena Williams is one of the greatest women's tennis players of all time. But at 33 years old, many were beginning to speculate that 2015 could be the beginning of the end.

Instead, Williams came and out proved that she still has plenty left in the tank. She won the Australian Open, the French Open and Wimbledon easily, giving her a chance to become the first woman to complete the in-season "Grand Slam" since Steffi Graf in 1988.

However, in the US Open semifinals, Williams suffered a shocking upset to unranked Roberta Vinci to knock her out of the tournament.

Despite the loss, Serena's season helped open a discussion about the portrayal of female athletes in America and helped establish her as one of the greatest of all time.

After years of playing fourth (or fifth) fiddle to the Boston Red Sox, New York Yankees and the Tampa Bay Rays in the AL East, the Blue Jays pieced together a magical 93-69 regular season in 2015, good enough to earn a spot against the Texas Rangers in the ALDS.

After four thrilling back-and-forth games, the series returned to Toronto for a decisive game five. With the game tied at two in the seventh inning, the game suddenly jumped the rails.

In the top of the inning, the Rangers took the lead when one of the most routine plays in baseball went awry.

Blue Jays fans unhappy with the ruling responded by throwing beer and trash on to the field, further delaying the game.

But Toronto stormed back in the bottom of the inning, re-taking the lead on three Ranger errors. Then, Blue Jay slugger Jose Bautista sealed it with "The Flip Heard 'Round the World."

8. Jordan Speith steals the US Open

Jordan Speith made the jump from "next big thing" to bona-fide superstar in 2015, shooting a dominant 18-under-par at the Masters. As likable, polite young man from Texas, critics were already anointing him as golf's savior following the downfall of Tiger Woods.

At the US Open in June, Speith led the field at what many considered to be the most difficult course in tournament history. However, with one hole remaining, Dustin Johnson faced a short birdie putt to force a playoff round with Speith.

Johnson's miss allowed Speith to skate by with his second straight major. 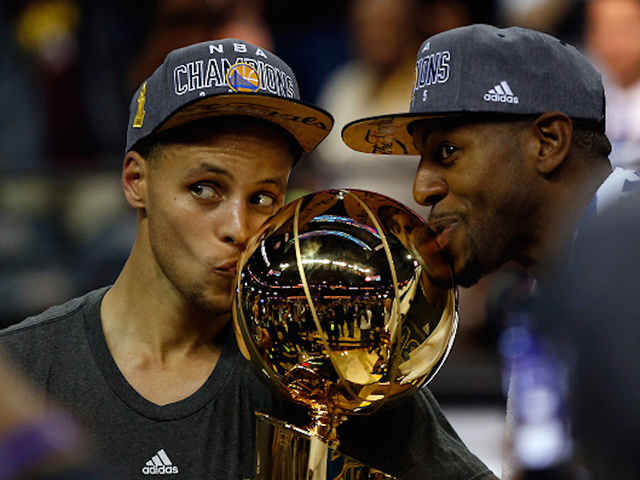 Back in the day, the Golden State Warriors were a vagabond franchise that hadn't won a championship in decades. That was before Steph Curry got there.

The 27-year-old point guard proved to be the catalyst for one of the most dramatic franchise turnarounds in NBA history. The Warriors led the league with 67 regular-season wins in 2014-15 and tore through a difficult Western Conference in the playoffs for the right to face LeBron James and the Cleveland Cavaliers in the NBA Finals.

In the Finals, Golden State's ball movement and team play proved to be too much for a Cavalier team decimated by injury.

But a championship doesn't seem to be enough for the Warriors. They're off to a hot start in 2015-16, with a record-setting 20 straight wins to begin a season. 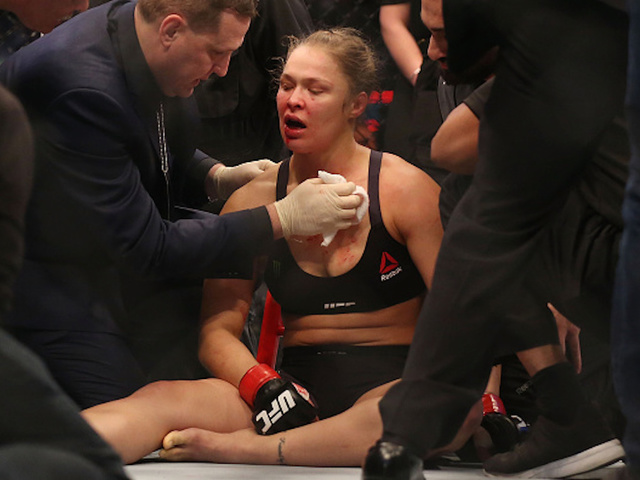 No one dominated their sport like Ronda Rousey did for the better part of 2015. She began her mixed martial arts career by winning her first 12 fights — all in first round submissions or knockouts. Her fights became appointment viewing — even though they averaged just a minute and 18 seconds apiece.

Rousey's quickly became one of the most-recognized female athletes in the world, donning the cover of magazines, starring in movies and becoming a role model for thousands of young girls.

But on Nov. 14, Holly Holm did the unthinkable when she stepped into the ring with Rousey — she survived a full round. Then, a minute later, Holm capped off perhaps the biggest upset in the history of mixed martial arts. 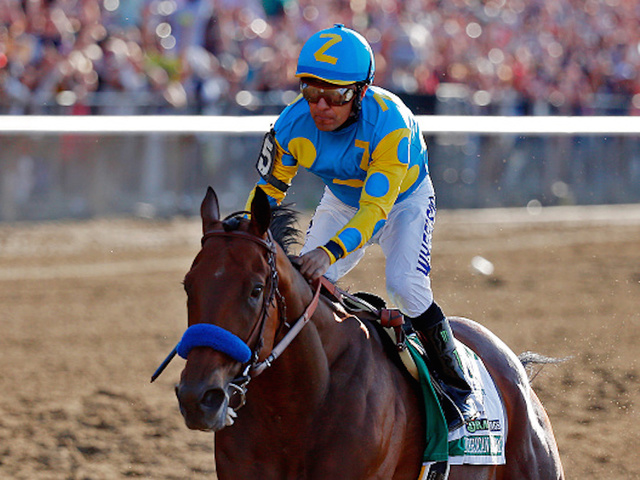 Prior to 2015, many fans of horse racing though they would never see another Triple Crown winner. Well past its golden years, "The Sport of Kings" hadn't seen a horse win the Kentucky Derby, the Preakness and the Belmont in a single year since Affirmed accomplished the feat in 1978.

Not that horses hadn't come close. Eleven horses won both the Kentucky Derby and the Preakness in that span, the last being Big Brown in 2008.

In June, American Pharaoh entered the Belmont stakes in that exact same position. But unlike the 11 before him, he finished the job.

The Belmont win made American Pharaoh the first Triple Crown winner in 36 years, 11 months and 28 days. 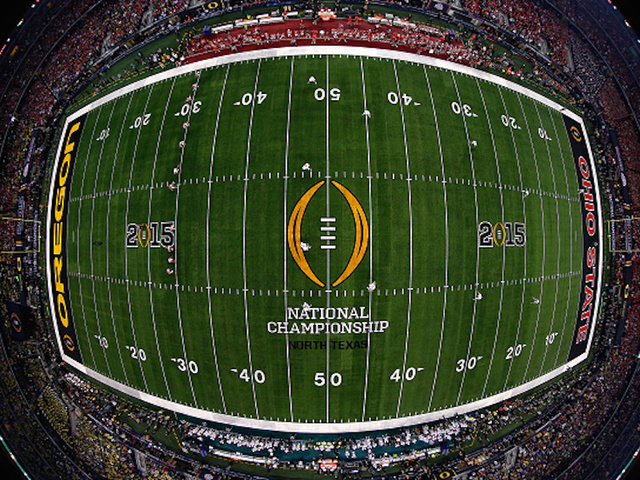 4. College football chooses a champion with a playoff

For decades, fans asked, pleaded and begged the NCAA to adopt a playoff system in college football. They were tired of teams being crowned by coaches, computers and sports writers. They wanted a champion to be determined just like it was in every other American sport — on the field.

Fans finally got their wish in 2015, and college football couldn't have picked a better year to implement the system. Under the BCS, Ohio State would have likely been eliminated from championship contention after an early-season loss to Virginia Tech. But despite losing two starting quarterbacks to injury, the Buckeyes earned the fourth and final spot in the playoff, where they upset top-ranked Alabama in the Sugar Bowl.

A week later, Ohio State rocked second-ranked Oregon 42-20 to earn the National Championship. Without a playoff, the Buckeyes' season would have likely ended in a meaningless Bowl Game. 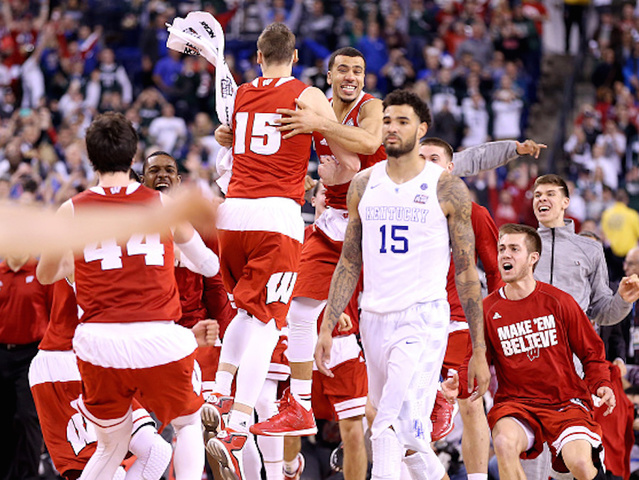 While it's not unheard of to go undefeated in college basketball, changes to the game like the "one-and-done" rule, a longer schedule and the 3-pointer have made it nearly impossible. But in 2015, Kentucky nearly made it happen.

The 2014-15 Wildcats featured at least four future NBA players, as well as a few highly-recruited freshman not eligible for June's NBA Draft. Kentucky breezed through the regular season, the SEC tournament and the first three rounds of the NCAA tournament with barely a challenge, winning their first 38 games by an unprecedented 21 points per game.

But in the Final Four, Kentucky ran into the only team built to beat them: the Wisconsin Badgers. Sam Dekker took over down the stretch and Wildcats bid for history was denied.

Wisconsin would fall to Duke 68-63 two days later in the National Championship game.

Between "The Helmet Catch,""The Tip-Toe" and "The Onside Kick," America has been treated to some of the best games in Super Bowl history over the last decade. But Super Bowl XLIX may have topped them all.

After scoring 24 unanswered points in the second and third quarters, reigning champion Seattle Seahawks led the New England Patriots 24-14 heading into the fourth quarter. But future Hall-of-Famer Tom Brady wouldn't be denied and tossed two touchdown passes to give the Patriots a four-point lead with just over two minutes remaining.

Seattle mounted an impressive drive all the way down to the New England one-yard line. But instead of giving the ball to All-Pro running back Marshawn Lynch, Seahawk quarterback Russell Wilson forced a throw in to traffic.

Malcolm Butler, a rookie out of the University of West Alabama, established himself in NFL lore with the game-clinching interception. The Patriots won, 28-24. 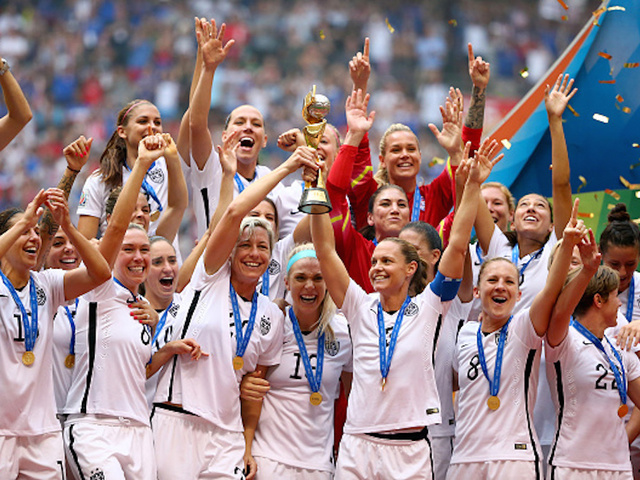 1. US women conquer the world

Though the United States consistently has one of the top women's national teams worldwide, it had been a decade-and-a-half since Brandi Chastain kicked the US to a World Cup in 1999. Determined to get back on top, the US came out on fire, suffering only a draw with Sweden in the group stage.

After a surviving a grueling semifinal against Germany, the US advanced to face Japan, the team that beat them on penalty kicks in the 2011 World Cup.

It took Carli Lloyd just three minutes to find the back of the net.

Then she scored again.

Llyod's first-half hat trick propelled the US to an easy 5-2 victory and a World Cup championship.