Three tropical systems are spinning in the Atlantic 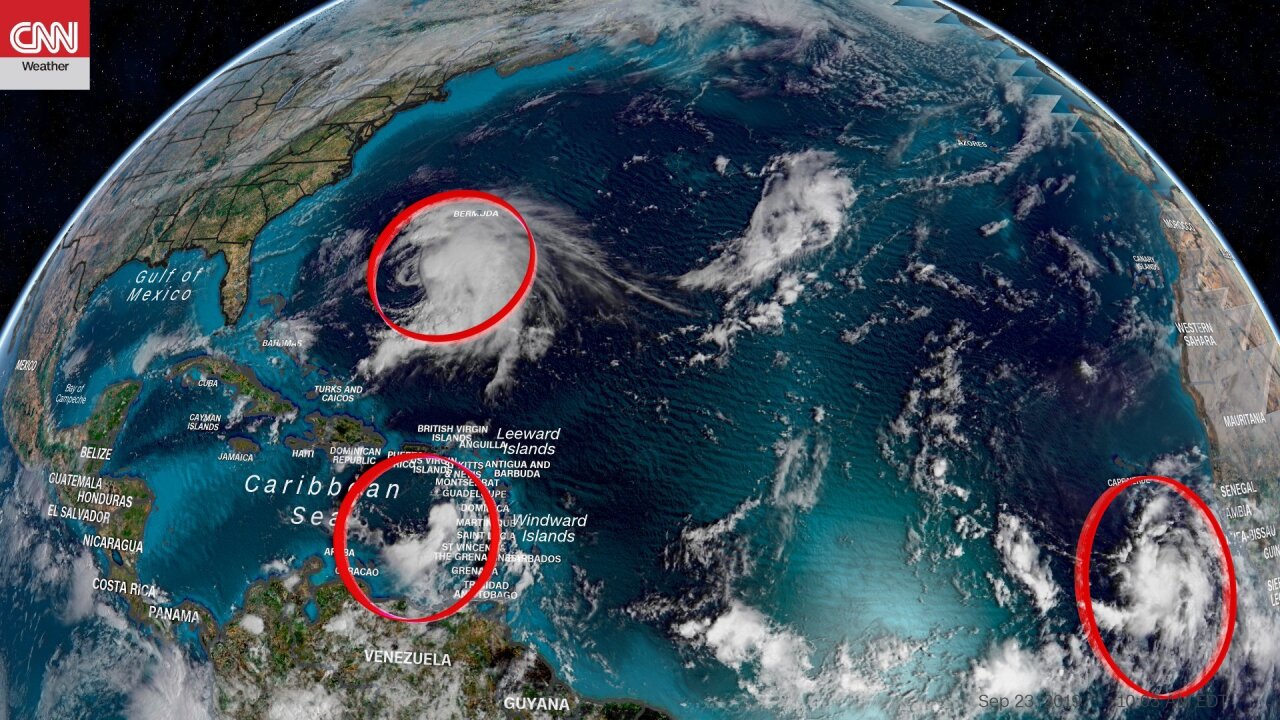 Tropical Storms Jerry, Karen and Lorenzo are spinning across the Atlantic Basin and two of them are impacting land Tuesday.

Jerry to turn towards Bermuda

Tropical Storm Jerry is slowly weakening and sustained winds have decreased to 50 mph. As it moves northward the storm will continue to weaken but will remain a tropical storm as it turns toward Bermuda on Wednesday. Tropical storm force winds are possible there early Wednesday.

The center of Jerry is expected to pass near or over Bermuda on Wednesday.

Tropical-storm-force winds extend 185 miles from the center and could arrive as early as Tuesday afternoon.

A Tropical storm warning is in effect for the island. This warning means that tropical storm conditions are expected somewhere within the warning area within 36 hours.

The main threats will be the tropical-storm-force winds and dangerous coastal swells.

Large swells are also expected to affect the coast of "Bermuda during the next few days," said the National Hurricane Center. "These swells could cause life-threatening rip currents."

Also, Jerry is expected to produce 1 to 3 inches of rainfall across Bermuda through Wednesday.

Karen, lost strength Monday afternoon and dropped to a tropical depression. By Tuesday morning it gained all of its energy back and now continues to track across the Caribbean toward the Puerto Rico and the US Virgin Islands as a tropical storm.

Karen is packing 45 mph winds and moving north at 7 mph. Tropical storm force winds and heavy rainfall will continue to impact the area into Wednesday morning.

Karen is expected to "pass near or over" Puerto Rico and the Virgin Islands as a tropical storm, the center said.

On the other side of the Atlantic, Tropical Storm Lorenzo is forecast to become "a large and powerful hurricane" according to the National Hurricane Center.

It is currently a strong tropical storm with winds of 65 mph and will likely become a hurricane later Tuesday or Wednesday.

Lorenzo is heading to the west-northwest at about 17 mph.

Lorenzo won't be any threat to land this week. But it is expected to strengthen quickly, possibly becoming the season's third major hurricane by the weekend.

It is expected to begin making a turn to the north by the end of the weekend.