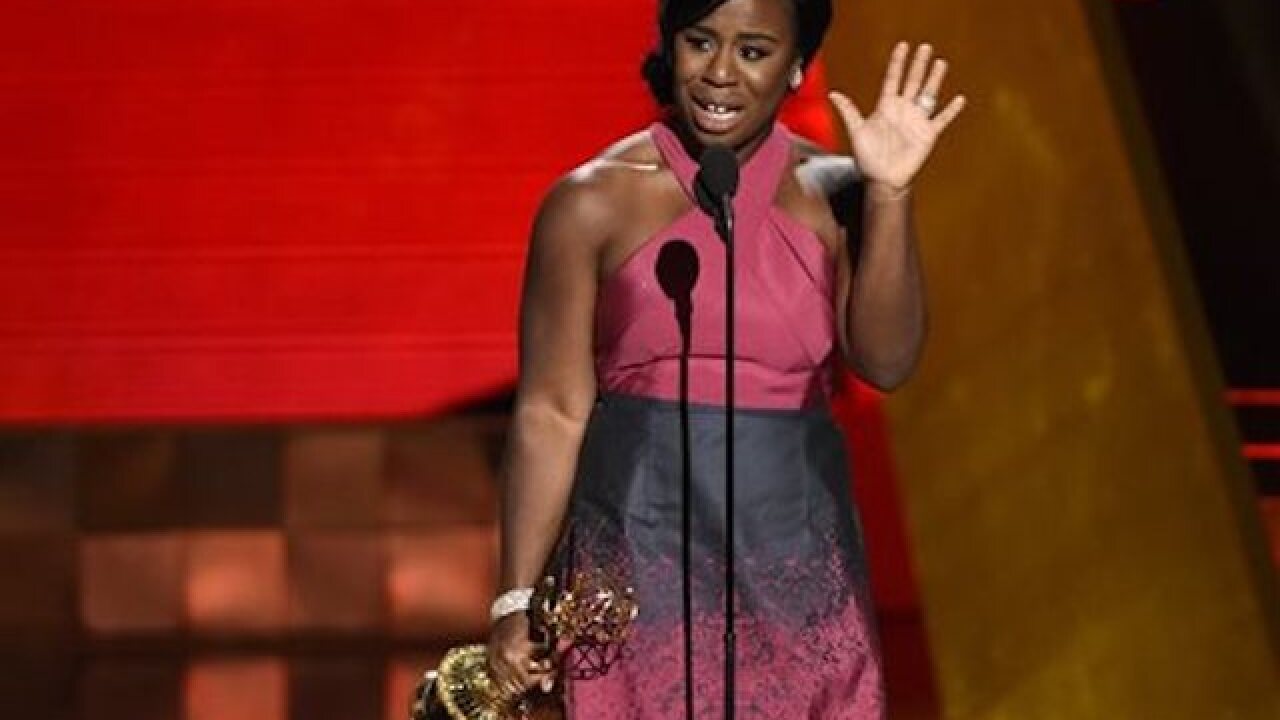 Copyright Associated Press
&lt;p&gt;In this Sunday, Sept. 20, 2015 file photo, Uzo Aduba accepts the award for outstanding supporting actress in a drama series for "Orange Is The New Black" at the 67th Primetime Emmy Awards at the Microsoft Theater in Los Angeles. In one of the exhaustive and damning reports on diversity in Hollywood, a new study finds that the films and television produced by major media companies are "whitewashed." (Photo by Chris Pizzello/Invision/AP, File)&lt;/p&gt;

NEW YORK (AP) — In one of the most exhaustive and damning reports on diversity in Hollywood, a new study finds that the films and television produced by major media companies are "whitewashed," and that an "epidemic of invisibility" runs top to bottom through the industry for women, minorities and LGBT people.

A study to be released Monday by the Media, Diversity and Social Change Initiative at the University of Southern California's Annenberg School for Communication and Journalism offers one of the most wide-ranging examinations of the film and television industries, including a pointed "inclusivity index" of 10 major media companies — from Disney to Netflix — that gives a failing grade to every movie studio and most TV makers.

Coming just days before an Academy Awards where a second straight year of all-white acting nominees has enflamed an industry-wide crisis, the report offers a new barrage of sobering statistics that further evidence a deep discrepancy between Hollywood and the American population it entertains, in gender, race and ethnicity.

"The prequel to OscarsSoWhite is HollywoodSoWhite," said Stacy L. Smith, a USC professor and one of the study's authors, in an interview. "We don't have a diversity problem. We have an inclusion crisis."

The study, titled the Comprehensive Annenberg Report on Diversity, examined the 109 films released by major studios (including art-house divisions) in 2014 and 305 scripted, first-run TV and digital series across 31 networks and streaming services that aired from September 2014 to August 2015. More than 11,000 speaking characters were analyzed for gender, racial and ethnic representation and LGBT status. Some 10,000 directors, writers and show creators were examined, as was the gender of more than 1,500 executives.

The portrait is one of pervasive underrepresentation, no matter the media platform, from CEOs to minor characters. "Overall, the landscape of media content is still largely whitewashed," the study concludes.

In the 414 studied films and series, only a third of speaking characters were female, and only 28.3 percent were from minority groups — about 10 percent less than the makeup of the U.S. population. Characters 40 years or older skew heavily male across film and TV: 74.3 percent male to 25.7 percent female.

"When we start to step back to see this larger ecology, I think we see a picture of exclusion," said Smith. "And it doesn't match the norms of the population of the United States."

Behind the camera, the discrepancy is even greater. Directors overall were 87 percent white. Broadcast TV directors (90.4 percent white) were the least diverse.

Just 15.2 percent of directors, 28.9 percent of writers and 22.6 percent of series creators were female. In film, the gender gap is greatest: Only 3.4 percent of the films studied were directed by women, and only two directors out of the 109 were black women: Ava DuVernay ("Selma") and Amma Asante ("Belle").

Following a request made in May by the American Civil Liberties Union (which cited previous USC studies, as well as those by UCLA and the Directors Guild in claiming women have been "systematically excluded" from directing jobs), the Equal Employment Opportunity Commission last year began investigating gender discrimination in Hollywood.

The federal investigation is just one element of growing scrutiny for the industry. But for protesters, finding a target for what some consider a systematic problem isn't easy. Even many of those, like Spike Lee, who have criticized the Academy of Motion Pictures Arts and Sciences, have insisted the issue goes far deeper than Oscar nominees. When academy president Cheryl Boone Isaacs recently announced dramatic steps to diversify the overwhelmingly white and male film academy, she said: "The academy is going to lead, and not wait for the industry to catch up."

USC's study, which the school has been publishing in various forms for the last 10 years, also seeks to add a new metric in the conversation. The "inclusivity index" is a report card for the performances of 21st Century Fox, CBS, NBC Universal, Sony, the Walt Disney Co., Time Warner, Viacom, Amazon, Hulu and Netflix. Those companies encompass all the broadcast networks, most major cable channels, all of the major movie studios and three of the dominant streaming services.

Each was rated by their percentage of female, minority and LGBT characters; and of female writers and directors. None of the six major studios rated better than 20 percent overall; Time Warner fared poorest of all with a score of zero. The report concludes that the film industry "still functions as a straight, white, boy's club."

Some of the same companies, however, scored better when their TV and digital offerings were evaluated. Disney, the CW, Amazon and Hulu all scored 65 percent and above.

"When we turn to see where the problem is better or worse, the apex to this whole endeavor is: Everyone in film is failing, all of the companies investigated," said Smith. "They're impervious to change. But there are pockets of promise in television. There is a focus that change is possible. The very companies that are inclusive — Disney, CW, Hulu, Amazon to some degree — those companies, if they're producing and distributing motion pictures, can do this. We now have evidence that they can, and they can thrive."

The research offers the chance for comparison between mediums. Do streaming services adhere to the established patterns of traditional television or deviate from them?

In some cases, they do, but in many, they don't. Netflix (20 percent on the inclusion index) scored about the same as NBC Universal, CBS and Fox. There were far fewer female directors working in digital series (11.8 percent) than in broadcast (17.1 percent), in the shows studied. Broadcast, cable and steaming series also all revel in sexualized female characters and nudity more than movies do.

But some of the study's most troubling finds are simply absences. Roughly 50 percent of the examined content didn't feature one Asian or Asian-American character; 20 percent didn't include one black character. Researchers argue for change beyond "tokenism," including making target goals public and creating a system of checks and balances in storytelling decisions.

"People are still erased. It's 2016 and it's time for a change," said Smith. "We've laid out concrete actionable steps because we don't want to do this again in 10 years."