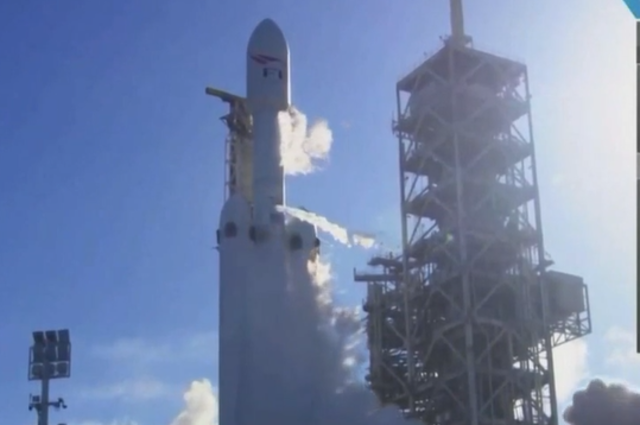 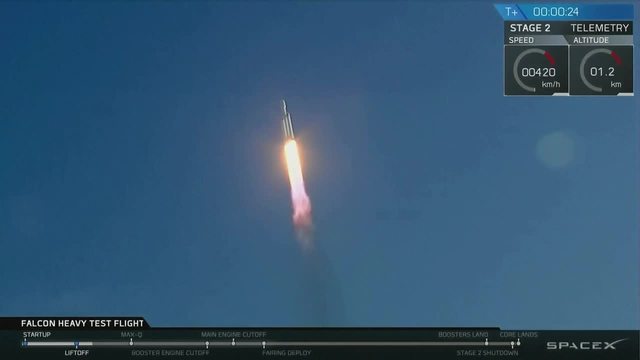 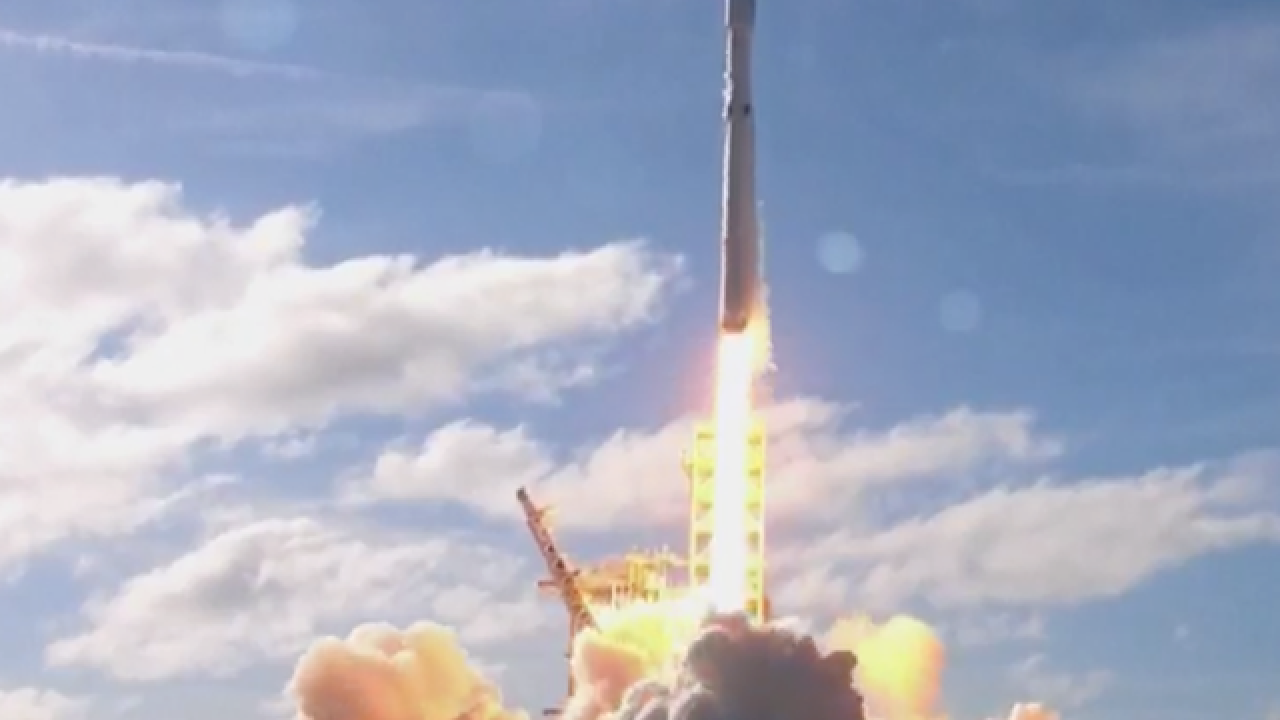 The Falcon Heavy rose from the same launch pad used by NASA nearly 50 years ago to send men to the moon. With liftoff, the Heavy became the most powerful rocket in use today, doubling the liftoff punch of its closest competitor.

The three boosters and 27 engines roared to life at Kennedy Space Center, as thousands jammed surrounding beaches, bridges and roads to watch the rocket soar, delayed more than two hours by high wind.

Two of the boosters were recycled and programmed to return for a simultaneous touchdown at Cape Canaveral, while the third, brand new, set its sights on an ocean platform some 300 miles offshore.

SpaceX chief executive Elon Musk owns the rocketing Tesla Roadster, which is shooting for a solar orbit that will reach all the way to Mars. As head of the electric carmaker Tesla, he combined his passions to add a dramatic flair to the Heavy's long-awaited inaugural flight. Typical ballast for a rocket debut: concrete or steel slabs, or experiments.

On the eve of the flight, Musk told reporters the company had done all it could to maximize success and he was at peace with whatever happens: success, "one big boom" or some other calamity. The longer the flight, he noted, the more the company would learn from the heavily instrumented rocket.

Musk has plenty of experience with rocket accidents, from his original Falcon 1 test flights to his follow-up Falcon 9s, one of which exploded on a nearby pad during a 2016 ignition test. The Falcon Heavy is a combination of three Falcon 9s, the rocket that the company uses to ship supplies to the International Space Station and lift satellites. Spacex is reusing first-stage boosters to save on launch costs.

The Heavy is intended for massive satellites, like those used by the U.S. military and major-league communication companies. Even before the test flight, customers were signed up.

Given the high stakes and high drama, Tuesday's launch attracted huge crowds not seen since NASA's last space shuttle flight seven years ago. While the shuttles had more liftoff muscle than the Heavy, the all-time leaders in both size and might were NASA's Saturn V rockets, which first flew astronauts to the moon in 1968.

Not counting Apollo moon buggies, the Roadster is the first automobile to speed right off the planet.

At the convertible's wheel is SpaceX's "Starman," a dummy in a white-and-black-trimmed spacesuit, and on the soundtrack is another nod to David Bowie: his 1969, pre-Apollo 11 song "Space Oddity," featuring the memorable line "Ground Control to Major Tom." SpaceX is hoping for live shots of the car from on-board cameras, once the protective enclosure comes off and the car sails off fully exposed.

The car faces considerable speed bumps before settling into its intended orbit around the sun, an oval circle stretching from the orbit of Earth on one end to the orbit of Mars on the other.

First, the Roadster needed to survive liftoff, no small feat for a rocket hot off the factory floor. Then it has to endure a cosmic bombardment on its several hours of cruising through the highly charged Van Allen radiation belts encircling Earth. Finally, a thruster has to fire to put the car on the right orbital course.

If it weathers all this, the Roadster will reach the vicinity of Mars in six months, Musk said. The car could be traveling between Earth and Mars' neighborhoods for a billion years, according to the high-tech billionaire.

Musk acknowledged the Roadster could come "quite close" to Mars during its epic cruise, with only a remote chance of crashing into the red planet.

Win or lose, the Heavy already is rattling the launch market. Its sticker price is $90 million, less than one-tenth the estimated cost of NASA's Space Launch System megarocket in development for moon and Mars expeditions.

SpaceX has decided against flying passengers on the Heavy, Musk told reporters Monday, and instead will accelerate development of an even bigger rocket to accommodate deep-space crews. His ultimate goal is to establish a city on Mars.

SpaceX's hot new monster rocket makes its launch debut this week, blasting off from the same pad that hoisted men to the moon a half-century ago.

What to know about SpaceX's Falcon Heavy before it launches

But when it departs on its first test flight — as early as Tuesday (launch window is set between 2:20 p.m. and 4:00 p.m.)— the Heavy with its three boosters and 27 engines will be the most powerful working rocket out there today, by a factor of two. Picture SpaceX's frequent-flyer Falcon 9 and its single booster and then times that by three; the Heavy's three first-stage boosters are strapped side by side by side.

The Heavy represents serious business for the private space company founded 16 years ago by Elon Musk. With more than 5 million pounds of liftoff thrust — equivalent to 18 747s jetliners — the Heavy will be capable of lifting supersize satellites into orbit and sending spacecraft to the moon, Mars and beyond.

Using another airplane analogy, SpaceX boasts a Heavy could lift a 737 into orbit, passengers, luggage and all.

The company already has some Heavy customers lined up, including the U.S. Air Force.

"I can't wait to see it fly and to see it fly again and again," said the Southwest Research Institute's Alan Stern. He's the lead scientist for NASA's New Horizons spacecraft which made an unprecedented flyby of Pluto and is now headed to an even smaller, icy world on the fringes of the solar system.

Cape Canaveral hasn't seen this kind of rocket mania since the last space shuttle flight in 2011. Huge crowds are expected for the afternoon launch from Kennedy Space Center. Visitor center tickets for the best up-close viewing, called "Feel the Heat" and "Closest Package," sold out quickly.

"When you're talking about what would be the biggest and largest operational launch vehicle in the world, that adds another dimension of excitement," said Phil Larson, an assistant dean at the University of Colorado at Boulder, who used to work for SpaceX and the Obama administration.

But for this inaugural flight, the rocket will carry up Musk's cherry-red Tesla Roadster. In addition to SpaceX, he runs the electric car maker Tesla.

"Red car for a red planet," Musk tweeted in December, when announcing the surprise cargo.

NASA officials said the Falcon Heavy is just the latest evidence of the Kennedy Space Center's transformation into a multi-user spaceport, a turnaround after decades of space shuttles taking center stage.

A variety of rockets will be needed — besides NASA's still-under-construction Space Launch System megarocket — as astronauts venture out into the solar system, said Kennedy's director of center planning and development, Tom Engler. Blue Origin, led by Amazon's Jeff Bezos, for instance, is developing a big, reusable orbital-class rocket named New Glenn after the first American to orbit the world, John Glenn.

Cocoa Beach Mayor Ben Malik, a banker by day, noted that jobs are making a big comeback, with so many private rocketeers and other aerospace businesses hitting town. The area suffered thousands of layoffs when the 30-year space shuttle program ended.

"We are not only back, but the region is much more diversified," Malik said. "We are becoming a high-tech hub."

Stern sees the Heavy opening the door to more exploration, both human and robotic, given its heft and cost savings. SpaceX's launch failures of Falcon 1 and Falcon 9 showed the company has "a very strong backbone." While Falcon 1 was completely on the SpaceX tab, Falcon 9 benefited from the company's contracts with NASA for space station shipments.

This persistence resulted in SpaceX becoming, in 2010, the first private company to launch a spacecraft into orbit and then safely guide it back to Earth, something only large governments had accomplished. Two years later, SpaceX became the first commercial supplier of the International Space Station. Now the company is aiming for the first commercial crew launch.

At the heart of SpaceX's cost savings is its rocket-recycling campaign. Two of the Heavy's first-stage boosters are repeats, having flown on Falcon 9s. The company will attempt to recover all three boosters; the two old boosters will aim for side-by-side vertical touchdowns at Cape Canaveral, while the new, beefed-up center core will attempt to land on a floating ocean platform.

Rocket makers typically discard their leftover boosters in the ocean. Now those boosters often come back and land, at least when it's SpaceX, complete with sonic booms just like the old shuttle days.

Unlike most rockets out there, the Falcon Heavy receives no government funding. The Mars-obsessed Musk has taken it upon himself and his California-based aerospace company to bankroll the hulking rocket. At a sticker price of $90 million, the Heavy is a relative bargain. NASA's bigger and more powerful SLS is expected to exceed $1 billion a flight.

Musk upped the ante by putting his Tesla atop this first Heavy; he's been warning for months the rocket might not make it higher than the launch tower.

If the flight succeeds, it will be the first true automobile hurled into space. It's destined for a perpetual orbit around the sun that will swing out as far as Mars. The car's soundtrack will be playing David Bowie's "Space Oddity."

"It is a catchy way to get attention," said Stern while driving his blue Tesla Model S in Boulder, Colorado, last week.

Musk is already looking ahead to an even bigger SpaceX rocket that would phase out both the Falcon 9 and Heavy.

Retired NASA historian and Smithsonian curator Roger Launius cautioned SpaceX has "a long history of overpromising," although eventually succeeding. The Heavy's debut, for example, has been delayed for years. Musk has acknowledged the Heavy proved harder to build than anticipated.

"I'm in favor of more capacity to get off this planet, so I cheer when anyone has a successful new rocket," Launius wrote in an email.

He promised to be "properly congratulatory" if and when success comes.