SALT LAKE CITY — Some pornographic websites are beginning to comply with a new Utah law requiring that warning labels be attached to adult-oriented materials.

"It shows for a lot of businesses, they're more concerned about their pocketbook than they are about being prosecuted," said Rep. Brady Brammer, R-Highland, who sponsored the bill earlier this year.

Brammer watered down the original bill, and it passed the legislature. Utah Gov. Gary Herbert, a Republican, allowed it to go into law without his signature.

The law allows people to bring a private civil action in court against a site for displaying "obscene" materials, but it would require someone to go to court and have something declared "obscene." 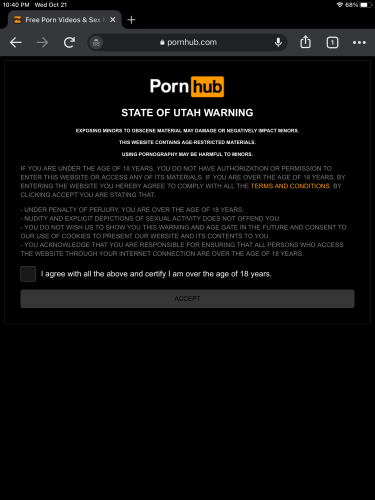 "No matter the message, the First Amendment restricts the government's ability to compel speech. Individual companies may choose to comply because it's easier than facing lawsuits or fines. We've never advised our members to comply, and don't believe this is being done in any widespread manner, but respect that a business may make decisions that limit potential liability," Mike Stabile, a spokesman for the Free Speech Coalition, said in an email. "As with similar, previous legislation in Utah, we'll eventually see the law challenged and overturned, and at no small expense to the Utah taxpayer. That's unfortunate, because that money and energy could be spent educating people about actually effective methods of protection, like parental filters."

While no websites have challenged the law in court, Brammer believes it will hold up.

"So far, it's been a lot of talk. I don't think that they will, if they do bring a legal challenge, I don't think they'll be able to succeed on that," Brammer said. "We have a difference of opinion on that. They haven't felt confident enough yet to bring a legal challenge and most of the companies, rather than make the challenge and spend the money on that, they're complying."

Brammer said he ultimately would like to expand the legislation to allow for people to sue an adult website, even if they don't know who owns it.

But he said he was not planning to bring that forward in the 2021 legislative session that begins in January. Other states have expressed interest in running similar legislation, he said.

Brammer said the warning label law has already alerted parents when their child was re-directed to an adult site, and it's educated them about parental filters.

He insisted his bill did not block adults from viewing pornography, just minors.

This story was originally published by Ben Winslow on KSTU in Salt Lake City.