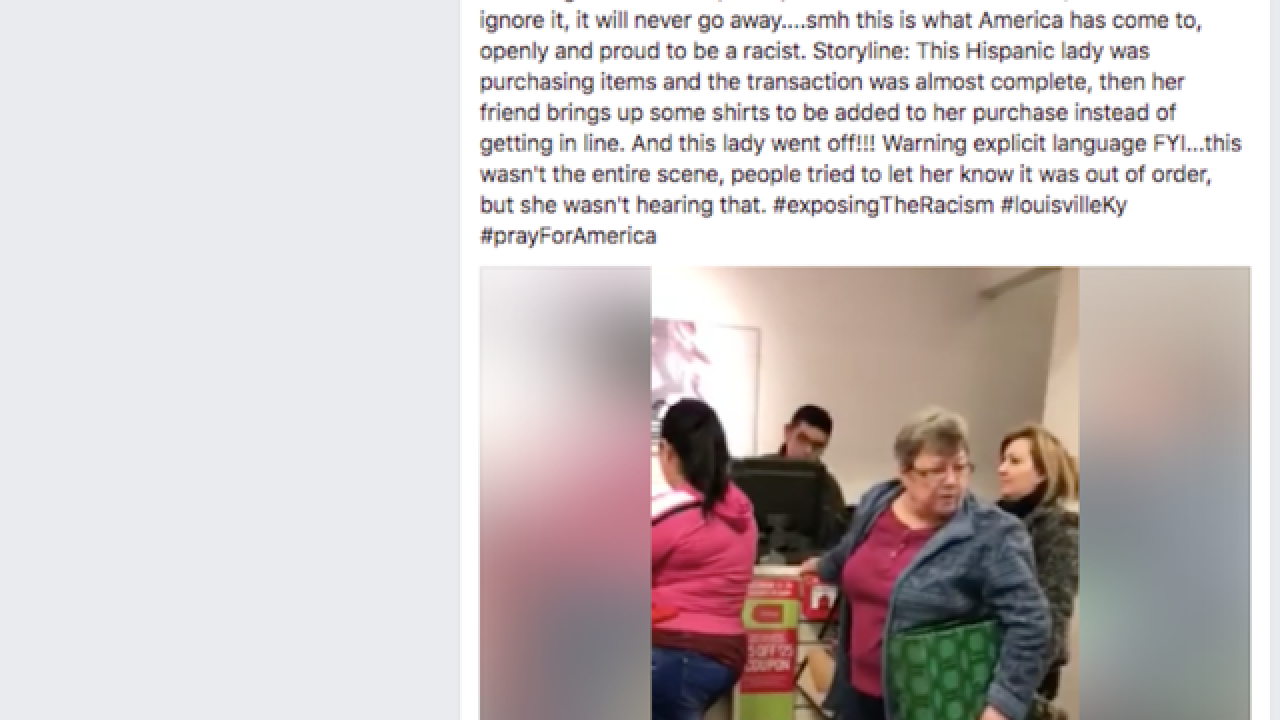 Renee Buckner / Facebook
&lt;p&gt;A screenshot of a Facebook video filmed by Renee Buckner shows a woman going on a rant at a mall in Louisville, Kentucky. The woman's rant was aimed at another shopper who appeared to be Hispanic.&lt;/p&gt;

Video of a shopper going on a racist rant at a mall in Kentucky went viral on Facebook this week, spurring the woman who filmed it to ask her followers to "pray for America."

"Go back to wherever the f--- you come from, lady ... tell them to go back where they belong," a white woman is seen telling another shopper who appears to be Hispanic in the video posted on Tuesday. The incident was recorded by Renee Buckner at Jefferson Mall in Louisville, Kentucky.

The video lasts about 80 seconds and has been viewed more than 4 million times since Buckner posted it. The clip was shared more than 100,000 times in about 14 hours.

Buckner said the rant was sparked as another woman who spoke Spanish approached the front of the line and handed the woman who looked Hispanic a few items to add to her transaction. The woman who ranted was offended at what she perceived as line cutting.

"Get in the back of the line like everybody else does," the woman is heard saying, as a line of people stand in stunned silence. When one of the women against whom she was railing tried to respond in Spanish, the angry shopper replied, "Speak English. You're in America. If you don't know it, learn it."

"I think everybody here probably feels the same way I do," the woman said to the group around her, apparently getting an agreement from at least one other person. "I'm sorry I'm that way but you all need to realize you're not the only ones around here," she says at the end of the video.

Update: As of 12:44 p.m. Eastern on Tuesday, Buckner had deleted the video and/or removed public permission to share it.