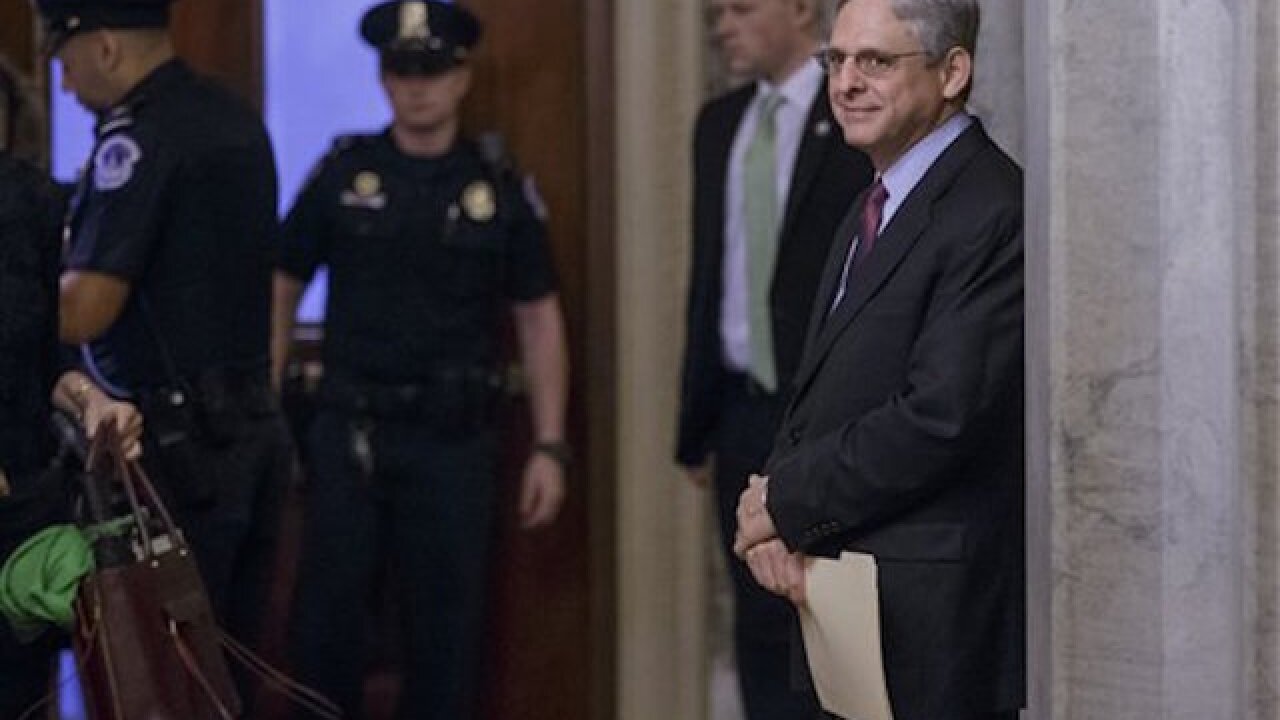 Grassley's breakfast meeting with federal judge Merrick Garland was "cordial and pleasant" and lasted about 70 minutes, according to a written statement released by the Iowa Republican's aides.

Grassley has been a favorite target of Democrats criticizing Republicans for their refusal to consider Obama's nomination this year. GOP opposition has been led by Senate Majority Leader Mitch McConnell, R-Ky., with Grassley refusing to allow his committee to hold even the usual hearings for the nominee.

Grassley evaded reporters waiting for him outside the Senate Dining Room in the Capitol, where he met with Garland. He had said in advance that he would recite to the judge the Republican position that the Senate won't consider a nominee until the new president elected this November makes a selection.

"As he indicated last week, Grassley explained why the Senate won't be moving forward during this hyper-partisan election year," Grassley's five-sentence statement said. "Grassley thanked Judge Garland for his service."

Garland as usual said nothing to reporters.

Minus Scalia, the high court is balanced 4-4 between justices who usually lean liberal or conservative. With voters about to choose a new president and control of Congress at stake in November, Republicans don't want to infuriate conservative voters and approve a justice who could tip the court in the liberal direction.

The judge had three other Senate meetings scheduled Tuesday, including with two Republicans, Lisa Murkowski of Alaska and Pat Toomey of Pennsylvania. Like Grassley, Murkowski and Toomey agreed to meet with Garland but have lined up behind McConnell in saying no nominee should be considered this year.

A spokeswoman for Murkowski said the senator had a private meeting with Garland Tuesday morning and discussed issues important to Alaska. Toomey's meeting was scheduled for later in the day.

Grassley, Murkowski and Toomey are all up for re-election this year. Grassley is heavily favored to win, but he drew a well-known Democratic challenger, former Lt. Gov. Patty Judge, after he announced that his committee would not hold hearings.

For weeks, Democrats have been criticizing Grassley almost daily on the Senate floor. With Grassley seeking a seventh Senate term in this November's voting, they have said they believe the pressure is beginning to show.

"These are not the actions of a senator who is confident in his decision to block a Supreme Court nominee," Senate Minority Leader Harry Reid, D-Nev., said Tuesday on the Senate floor, citing the private breakfast and accusing him of stifling committee business. "This is the behavior of a senator who knows he's on the wrong side of the Constitution and the wrong side of history."

Told of Grassley's meeting with Garland as he entered the Capitol Tuesday near the dining room, Reid said, "I'm glad he's doing something."

"The American people are grateful that Senator Grassley is standing up to President Obama's cynical attempt to force the Senate to confirm Merrick Garland, another liberal judge who will ensure the left dominates the Supreme Court for a generation or more," said Carrie Severino, chief counsel of the conservative Judicial Crisis Network.

Democrats and liberal groups have used demonstrations and press conferences to pressure Grassley back in Iowa.

Keith Uhl, a Republican attorney who helped manage Grassley's first Senate campaign, told reporters on a conference call Monday that the Senate should "man up and vote" on Garland. He was joined on the call by Iowa Attorney General Tom Miller, a Democrat, and Drake University Law Professor Mark Kende.