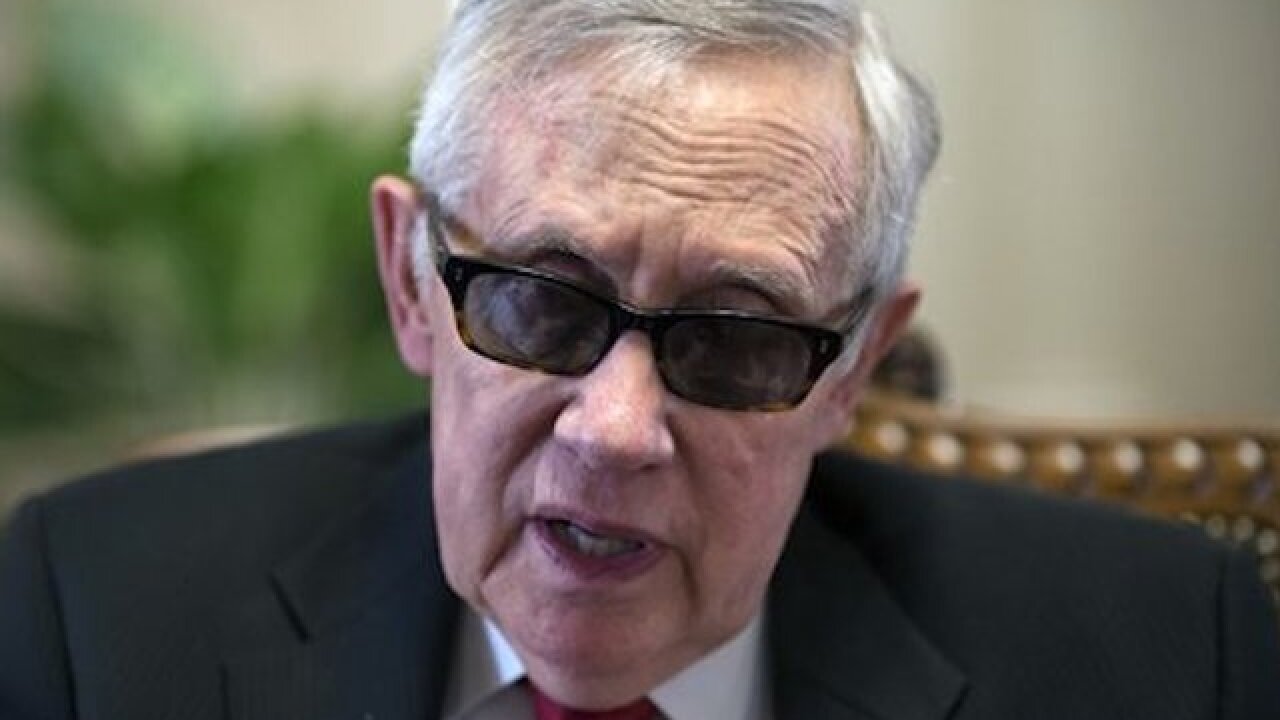 Copyright Associated Press
&lt;p&gt;Senate Minority Leader Harry Reid, D-Nev., speaks during an interview with The Associated Press in his leadership office at the Capitol in Washington, Tuesday, March 8, 2016. Never one to back down from a political fight, the five-term Nevada Democrat has been relentlessly pounding Republicans over their insistence that President Barack Obamaís successor fill the vacancy on the Supreme Court. The GOP remains unified. (AP Photo/J. Scott Applewhite)&lt;/p&gt;

Never one to back down from a political fight, the five-term Nevada Democrat has been relentlessly pounding Republicans over their insistence that President Barack Obama's successor fill the vacancy on the Supreme Court. Each day of the Senate session, the 76-year-old Reid, who is retiring at the end of his term, stands on the floor and rails against the GOP, casting them as obstructionists and lackeys of presidential front-runner Donald Trump.

"Republicans have not always been this irrational and vicious," Reid said Wednesday, calling the GOP the "party of Trump, the caucus of Trump, the conference of Trump."

Republicans, led by Majority Leader Mitch McConnell, R-Ky., remain united. They counter that the American people should decide in November who will choose the next justice, especially with primary votes already cast in nearly half the states. An Obama pick would tilt the ideological balance of what has been a mostly conservative court for decades, and the GOP base wants none of it.

So no confirmation hearing, no vote, no meeting with Obama's pick to replace the late Justice Antonin Scalia.

"I think it's very important that we continue to harp on the fact that all we're asking people to do is their job," Reid told The Associated Press in an interview in his Senate office on Tuesday.

The Democrat said he has talked to White House Chief of Staff Denis McDonough about a possible nominee, but declined to disclose his recommendation.

Reid, a former middleweight boxer and U.S. Capitol police officer, is famous — or infamous if you talk to Republicans — for bare-knuckles politics. The election-year fight over the Supreme Court nominee underscores that the stakes extend beyond the court to the presidency and majority control of the Senate.

At play is Reid's own Nevada seat where Democrat Catherine Cortez Masto, the state's former attorney general and Reid's choice, likely will face Republican Rep. Joe Heck in a costly and competitive race.

The partisan lines in the Senate have never been sharper.

"It's absolutely clear to me that Senate Republicans stand firmly behind the idea that the people should have a say in this critical issue," said Sen. John Cornyn, R-Texas.

Sen. Brian Schatz, D-Hawaii, said it's not as if Republicans "don't have time. It's not as if there aren't enough calendar days or session days to do the job. It's that from the beginning, they just decided that this was the hill that they wanted to die on."

Republicans and Democrats agree that the rhetorical offensive is Reid just being Reid. After all, this was the Democrat who called President George W. Bush a "loser" and poked the hornet's nest of the 2012 presidential campaign by suggesting — without documentation — that Mitt Romney hadn't paid taxes in 10 years.

"It seems a continuation of what we saw when he was majority leader," said Sen. John Barrasso, R-Wyo. "I think he's trying to double down on what has been very ineffective for him as a method of trying to lead his party. It's backfiring."

Particularly galling to Republicans is the fact that Reid changed the Senate rules, eliminating filibusters for most of the president's nominations, an extraordinary step known in the Senate as the nuclear option.

Said Sen. Dick Durbin of Illinois, the No. 2 Democrat in the Senate: "He's been this way for a long time."

A singular focus of Reid's criticism is Chuck Grassley, who took over as chairman of the Judiciary Committee when Republicans won control of the Senate in 2014.

The 82-year-old Iowa Republican has said no to confirmation hearings, recently complained about Obama's "systematic and massive overreach of his executive power" and criticized the "tantrums from the other side," a reference to the Democrats.

Democrats recruited Patty Judge, a former Iowa lieutenant governor, to challenge Grassley. If she can win the Democratic nomination, she faces an uphill fight against the plain-spoken, popular Grassley although the incumbent has been battered by scathing editorials back home in a state that voted for Obama twice.

"I've known Chuck Grassley for a long, long time. I've worked with him, but the position that he took on this nomination to the Supreme Court — immediately took by the way ... compelled me to decide that I was going to make this run," Judge said Tuesday, prior to meeting with Senate Democrats at their weekly luncheon.

Reid said he expects Obama to make a nomination shortly and "then it's going to change everything." As for the Republicans, "I think there may come a time when they decide that it's better to do their jobs," he said.