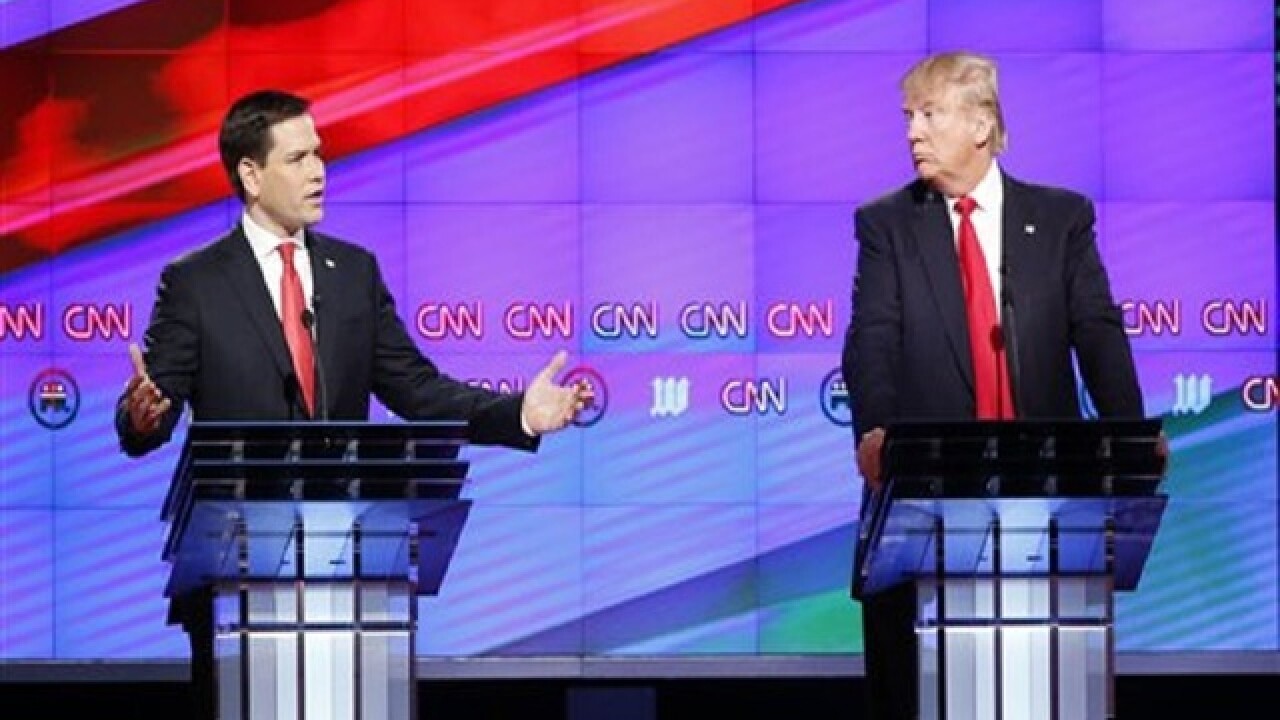 By: PolitiFact
Posted at 11:38 PM, Mar 10, 2016
The four remaining contenders for the Republican presidential race got together Thursday in Miami for a last – and crucial -- debate before elections in several states, including Florida.
Frontrunner Donald Trump, Texas Sen. Ted Cruz, Florida Sen. Marco Rubio and Ohio Gov. John Kasich scuffled on topics including Social Security, Islam and trade.
Other states competing in the March 15 include Illinois, Missouri, North Carolina and Ohio – all of which are primaries – as well as the caucuses in the Northern Mariana Islands.
We’ve teamed up with PolitiFact to analyze some of the statements made in Thursday night’s debate.
Fact Check #1: Cruz said, "There are two different agreements," Cruz said. "There’s TPA (Trade Promotion Authority), and TPP. I opposed TPP, and have always opposed TPP, which is what you asked about."
Cruz was referring to a question by Tapper, who asked him to explain why he shifted from supporting the TPP to opposing it in Thursday's debate in Miami.
The GOP candidate was quick to correct Tapper, explaining that his question contained an error.
PolitiFact checked the situation out.
It found that Cruz initially supported giving the president authority to finalize the TPP, and spoke positively about the concept of the trade deal.
But, according to records, he took no position on TPP until the full text when public – then, he opposed it
Our ruling?
Mostly True – Cruz did not support TPP once the full details became public.

Fact Check #2:Stating what he believes is most flawed about the Common Core education standards, Trump said, “Education through Washington, D.C. I don't want that. I want local education. I want the parents and I want all of the teachers, and I want everybody to get together around a school and to make education great.”
Common Core is set in place to create goals for English and math in public schools.
While Trump’s thoughts on Common Core is an often-used conservative attack, it appears he needs a history lesson.
PolitiFact found that school officials, non-profits teachers, parents and expert settled on Common Core standards in 2010. Washington was not a player in that game.
It’s worth nothing that President Barack Obama did, however, give states with education standards a leg up when applying for grant money.
Our ruling?
False – Washington was not a player in the game of developing Common Core standards.
Read the full finding here.
Fact Check #3: Trump said, “GDP (gross domestic product) was zero essentially for the last two quarters."
He continued, "If that ever happened in China, you would have had a depression like nobody's ever seen before. They go down to 7 percent, 8 percent, and it's a national tragedy. We're at zero, we're not doing anything."
PolitiFact looked in Trump’s claim.
Assuming that Trump was talking about growth in GDP and not the real gross domestic product -- which was more than $18 trillion in the last quarter of 2015 -- his statement that it’s zero is an exaggeration.
In reality, GDP grew at an annual rate of 1 percent in the fourth quarter of 2015, while it grew 2 percent in the third quarter, according to the Bureau of Economic Analysis.
PolitiFact further reports, “Compared to China’s 6.9 percent in 2015, that may seem like scant growth. But it’s not zero, nor is it historically low — a point Trump tried to make and flubbed in his June 2015 presidential announcement speech.”
Our ruling?
False - While economic growth in 2015 was modest, it was not zero.
Fact Check #4: Ted Cruz said, "Dealing with radical Islamic terrorism. On Israel, Donald has said he wants to be neural between Israel and the Palestinians. As President, I will not be neutral."
When PolitiFact looked into Cruz’s statement, it found that Trump did in fact state he wanted to be neutral between Israel and Palestinians – but only to be an effective negotiator.
Cruz, however, doesn’t mention Trumps other comments and actions which show support for Israel, including his endorsement of Netanyahu.
Our ruling?
Half True
Fact Check #5: Rubio said, "I'm against any sort of wasting of money on foreign aid, but it's less than 1 percent of our federal budget.”
Rubio’s comment came after he noted that many people argue that a lot of taxpayer money can be saved by cutting back on foreign aid – something he claimed isn’t reality.
PolitiFact checked whether foreign aid is less than 1 percent of the federal budget, finding multiple reports to back up Rubio’s claim – including the latest White House budget, which states that the 2014 international affairs budget was $46.7 billion on a total budget of $3.5 trillion.
That’s roughly 1.3 percent, but also includes money for the "conduct of foreign affairs."
When taking only International development and humanitarian assistance into account, the figures are very close to the 1 percent Rubio cited.
Historical figures back that up, too.
Our ruling?
True -- Several reports put the amount of foreign aid in the ballpark of Rubio’s claim.
See the full report here.
WPTV