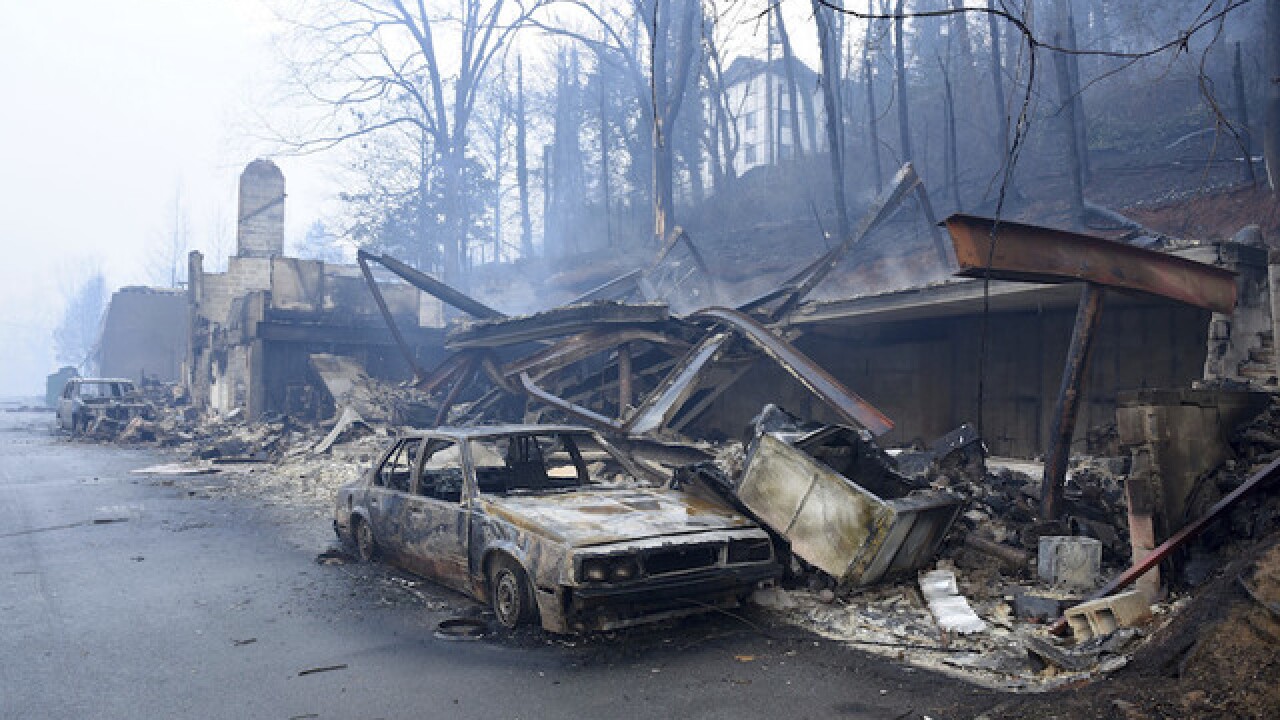 &lt;p&gt;Out of control wild fires have burned multiple business and vehicles like these along Cherokee Orchard Rd in Gatlinburg causing a mandatory evacuation Tuesday, Nov. 29, 2016.&lt;/p&gt;

By: Associated Press
Posted at 9:13 AM, Nov 29, 2016
GATLINBURG, Tenn. (AP) — In the foothills of the Great Smoky Mountains, a Tennessee tourist mecca emerged from the smoke, charred and vacant after a swift-moving wildfire. Many buildings were burned to their foundations. Hotel fire alarms echoed through empty streets lined with burned-out cars.
Fanned by hurricane-force winds Monday night, the flames reached the doorstep of Dollywood, the theme park in nearby Pigeon Forge named after country music legend and local hero Dolly Parton. The park was spared any significant damage.
Four people have died and about four dozen people have been hurt in the fires, an official said Wednesday.
Dollywood announced it would resume normal operations at 2 p.m., Friday, December 2 and the park's DreamMore resort is currently open to guests.
“I have been watching the terrible fires in the Great Smoky Mountains and I am heartbroken. I am praying for all the families affected by the fire and the firefighters who are working so hard to keep everyone safe,” Dolly Parton said in a statement posted on the theme park's website.
The fire picked its spots as it tore through the Gatlinburg area Monday: It destroyed at least 150 buildings but left others intact. Three people were killed and more than a dozen were hospitalized.

My thoughts and prayers are with the great people of Tennessee during these terrible wildfires. Stay safe!

By Tuesday evening, almost nothing remained of the Castle, perhaps the largest and most iconic home overlooking Gatlinburg. Entire churches disappeared. So did the Cupid's Chapel of Love wedding venue, though its managers promised to move scheduled weddings to a sister venue, Chapel at the Park.
Officials surveying early damage said the Westgate Smoky Mountain Resort & Spa, with more than 100 buildings, is likely entirely gone.
"I'm just astonished this is my town," Marci Claude, a spokeswoman for the city and for Gatlinburg Convention and Visitors Bureau, said as she saw the destruction for the first time on a media tour Tuesday.
Local officials offered reassurance that the worst was over Tuesday. More rain was in the forecast overnight and through Wednesday, though high winds were expected Tuesday night.
Much remained uncertain for a region that serves as the gateway into the Great Smoky Mountains, the country's most visited national park. Search and rescue efforts continued through the night in areas that had been unreachable because of downed power lines and trees.
A somber reality set in for Gatlinburg, a city of just 3,944 residents that draws more than 11 million visitors a year. But even Gatlinburg Mayor Mike Werner, who lost his home in the fire, remained steadfast that his city will recover.

What can you donate to the #RedCross for the #wildfire relief efforts? https://t.co/dulX7YC2gIpic.twitter.com/sqlc2OSOpI

"It's a devastating time for us and for Gatlinburg," Werner said at a news conference Tuesday. "As I said earlier this morning, we're strong. We're resilient. And we're going to make it. We're going to pull it together and continue to make Gatlinburg the premier resort that it is."
In all, more than 14,000 residents and tourists were forced to evacuate the tourist city in the mountains, where some hotspots persisted and a curfew was in effect overnight Tuesday.
Tennessee Gov. Bill Haslam, who flew in to see the damage caused by a fire he called the largest in the state in the past 100 years, said he was struck by how some buildings were burned to the ground while others — including most of the downtown entertainment cluster — were untouched.
"It just could have been so much worse," he said.
The governor said work would begin quickly to repair the damage to what he called "a special place in the state of Tennessee."
Though wildfires have been burning for several weeks across the drought-stricken South, Monday marked the first time any homes and businesses were destroyed on a large scale.
Rain forecast for Wednesday should help the area after weeks of punishing drought, but the bone-dry ground should soak up the moisture quickly, forecasters said. Rainfall amounts have been 10 to 15 inches below normal during the past three months in many parts of the South.
The Gatlinburg area wildfires spread when winds blew trees onto power lines, sparking new fires and shooting embers over long distances. Hundreds of homes and other buildings, including a 16-story hotel, were damaged or destroyed.
The fires spread quickly Monday night, when winds topping 87 mph whipped up the flames, catching residents and tourists in the area by surprise. Police banged on front doors and told people to get out immediately. Some trekked 20 minutes to catch lifesaving rides on trolleys usually reserved for tours and wedding parties.
"There was fire everywhere. It was like we were in hell," said Linda Monholland, who was working at Park View Inn in Gatlinburg when she and five other people fled on foot. "Walking through hell, that's what it was. I can't believe it. I never want to see something like that again in my life, ever."
___
Mattise reported from Nashville, Tennessee. Associated Press writers Steve Megargee, Kristin M. Hall and Erik Schelzig in Gatlinburg, Tennessee, contributed to this report.
Copyright 2016 The Associated Press. All rights reserved. This material may not be published, broadcast, rewritten or redistributed.