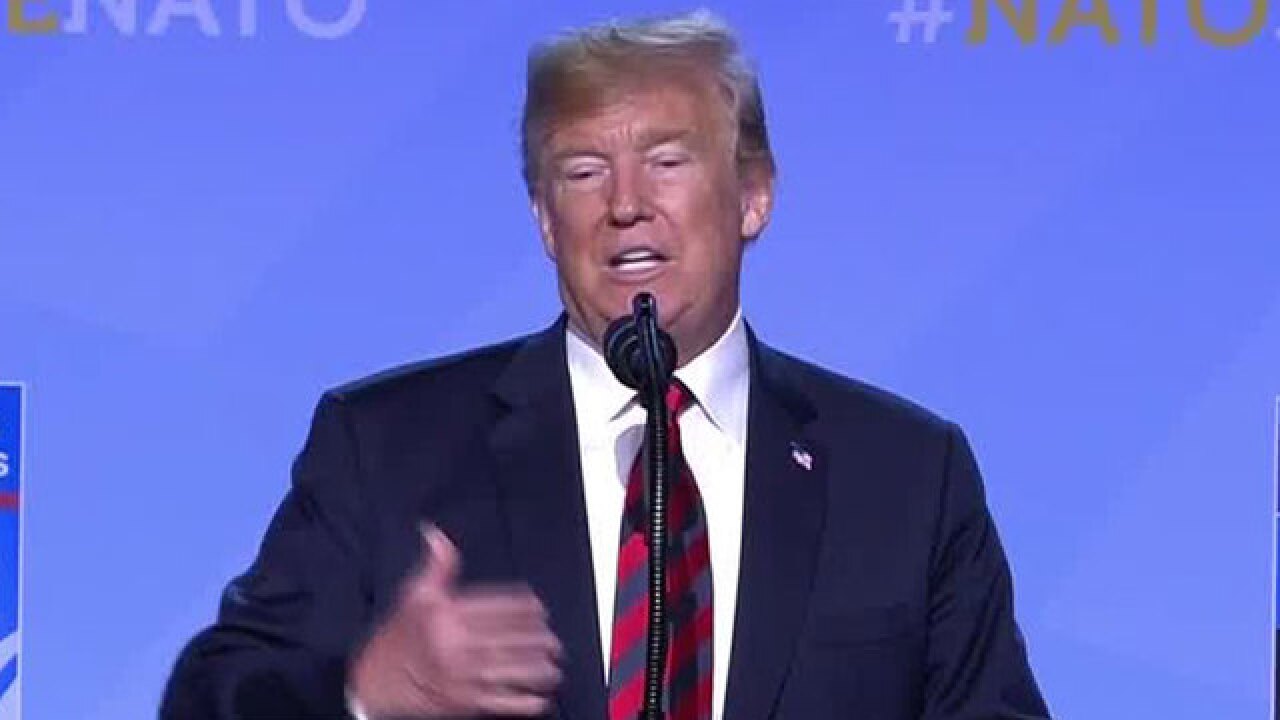 President Donald Trump capped off his tumultuous two-day visit at NATO headquarters on Thursday by boldly declaring that all NATO members agreed to increase their defense spending after he told them he was "extremely unhappy."

His unscheduled news conference offered Trump's signature touch for showmanship, but the US President came up empty when pressed to detail the new financial commitments he had secured, offering only that member countries "agreed to pay more and they agreed to pay it more quickly" and pointing to spending increases over the last year.

"Everyone has agreed to substantially up their commitment. They're going to up it at levels that they never thought of before," Trump said.

"I told people that I'd be very unhappy if they didn't up their financial commitments substantially," Trump said when asked if he threatened to pull out of the alliance. "I let them know that I was extremely unhappy with what was happening, and they have now substantially upped their commitment."

Trump was asked specifically if he thought he could pull out of NATO without congressional approval and he said: "I think I probably can, but that is unnecessary. They have stepped up today like they have never stepped up before."

Despite tweeting "what good is NATO" the day before, Trump praised the alliance on Thursday.

"I believe in NATO, I think NATO is a very important -- probably the greatest ever done," he said.

Trump also sought to claim a victory in his news conference on Wednesday, defending his the hard-nose tactics he displayed at the summit, which included accusing Germany of being "totally controlled" and "a captive of Russia."

"I think it's a very effective way to deal," Trump said, before insisting that "everybody in that (NATO) room got along."

Trump's provocative comments about Germany and defense spending on Wednesday rattled allies during the summit's first day. Some of the closest US allies were still reeling from Trump's diatribe accusing Germany of being "a captive of Russia" and insistence that "delinquent" allies increase defense spending "immediately."

But the President isn't likely to face vocal or widespread hostility until later in the day on Thursday, when he heads to London, where mass protests have been organized, for his first visit to the United Kingdom as President.

Trump also pointed to progress over the last year, prior to this NATO summit, to tout his success at this year's summit -- something the US ambassador to NATO had previously touted in a conference call with reporters ahead of the summit.

Trump also insisted that "everybody in that room got along," referring to NATO allies.

Before leaving for London, Trump participated in a pair of multilateral meetings focused on Russian aggression and the war in Afghanistan.

Trump arrived about a half-hour late to a North Atlantic Council meeting with Georgia and Ukraine, two countries who have both been invaded by Russia in the last decade.

Trump's late arrival is not a first for him. He also left a mark at the G7 summit in Quebec last month when he arrived more than 15 minutes late for a breakfast meeting with other world leaders on women's empowerment.

The US President then was scheduled to meet with allies participating in the NATO-led "Resolute Support" mission to train and advise Afghan security forces.

But ahead of his arrival for Day 2 of NATO's annual summit, Trump signaled he was not yet done with his attempts to pressure NATO allies to increase their defense spending.

"Presidents have been trying unsuccessfully for years to get Germany and other rich NATO Nations to pay more toward their protection from Russia. They pay only a fraction of their cost," Trump said, once again mischaracterizing a country's own defense spending as payments to NATO, as he has frequently done.

"On top of it all, Germany just started paying Russia, the country they want protection from, Billions of Dollars for their Energy needs coming out of a new pipeline from Russia. Not acceptable! All NATO Nations must meet their 2% commitment, and that must ultimately go to 4%!" he added.

NATO allies -- even German Chancellor Angela Merkel, whom Trump singled out -- have so far played nice with Trump. But the US president is expected to face mass protests during his trip's next leg in London -- complete with a giant "Trump baby" balloon -- that tens of thousands of people have said they plan to attend. The US embassy in London has already advised US citizens there to "keep a low profile" during Trump's visit and to "be aware of your surroundings (and) exercise caution if unexpectedly in the vicinity of large gatherings that may become violent."

Trump's UK visit has been in the works since early in his presidency but was repeatedly delayed because of the virulent opposition Trump has sparked there.

Still, Trump will travel through London, participating in a meet-and-greet with diplomatic personnel at the US embassy and staying overnight at the US ambassador's residence in the city. He and first lady Melania Trump will also have tea with Queen Elizabeth II.

Trump is arriving amid a swirl of domestic government turmoil as well, with May's government in crisis and her future as prime minister in question following a string of resignations from within her Cabinet over her Brexit strategy.

Ahead of Trump's arrival, May sought to play up the prospect of a post-Brexit trade deal with the US, one of her key political objectives.

"There is no stronger alliance than that of our special relationship with the US and there will be no alliance more important in the years ahead," May said in a statement released late Wednesday. "This week we have an opportunity to deepen this unique trading relationship and begin discussions about how we will forge a strengthened, ambitious and future-proof trade partnership."

Asked about May's precarious political position, Trump has said it is "up to the people" whether May remains in power and offered praise of Boris Johnson, the former London mayor who recently resigned as foreign secretary in May's government.

Trump did note before leaving for Europe on Tuesday that the UK is "somewhat in turmoil."