President Trump says impeachment will turn the U.S. into a third world country 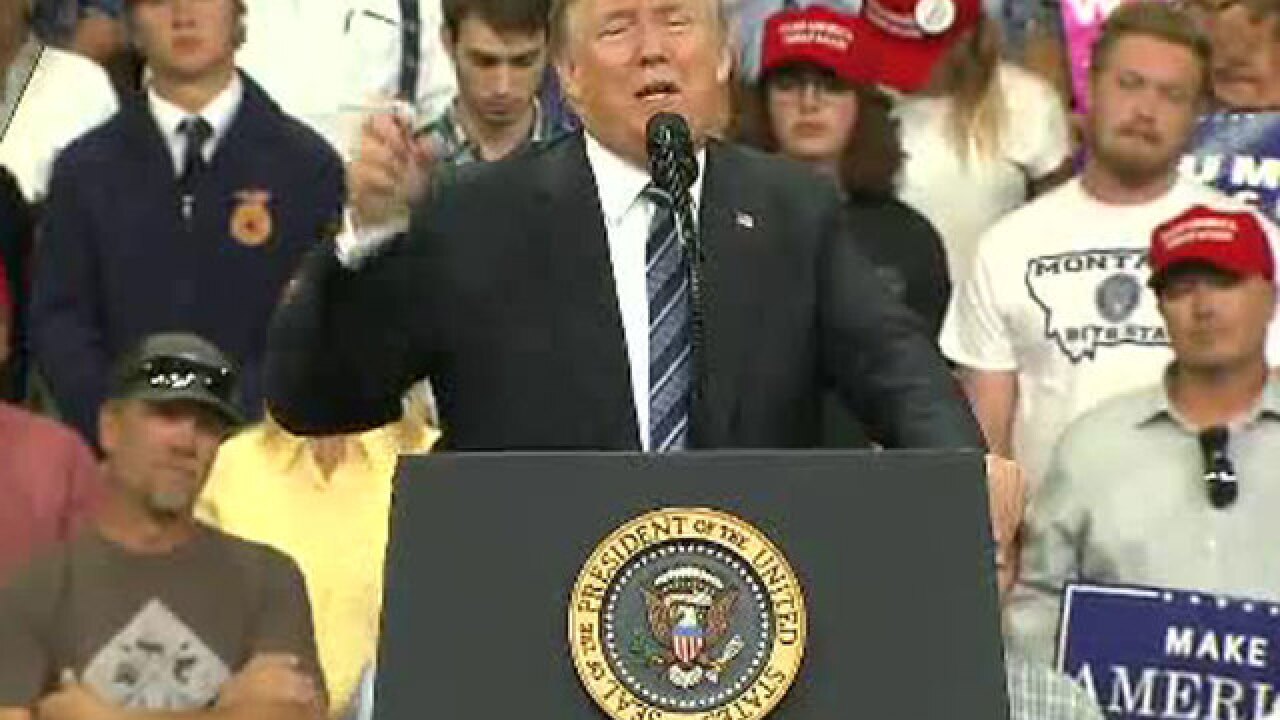 BILLINGS, Mont. (AP) — President Donald Trump praised Judge Brett Kavanaugh's progress toward winning confirmation to the Supreme Court but decried the "anger and the meanness on the other side," blasting Democrats' behavior toward his nominee as "sick."

During a campaign rally in Montana Thursday, Trump sought to elevate Kavanaugh's confirmation as a political litmus test for voters as he embraced a Republican challenger to Democratic Sen. Jon Tester, a top GOP target in the fall elections.

Trump also raised the specter of impeachment if Democrats win control of Congress.

As he stood alongside Tester's opponent, state Auditor Matt Rosendale, Trump said Tester "will never drain the swamp because he happens to live in the swamp." Seeking to portray the Montana farmer as a tool of liberal Democrats, Trump said, "Jon Tester talks like he's from Montana, but he votes like he's Nancy Pelosi" — a reference to the House minority leader, a frequent Trump target.

Trump said many of the Senate Democrats whom Tester had helped elect "are attacking Judge Kavanaugh and looking like fools." He said Kavanaugh — who is strongly opposed by Democrats on the Senate Judiciary Committee — deserved "overwhelming bipartisan support."

"It's embarrassing to watch those people make fools of themselves as they scream and shout at this great gentleman," Trump said after three days of committee hearings on the nomination.

The president's strategy on the Supreme Court nomination aims to turn the screws on Tester and Sen. Heidi Heitkamp of North Dakota, where Trump planned to appear Friday. Both red-state Democrats find themselves caught between their Senate leaders and their states' more conservative voters, who are more broadly supportive of Trump's pick.

Neither senator has laid down clear markers on how they will vote on Kavanaugh's nomination, which Senate Republican leaders hope to bring to a floor vote later this month — just weeks before the Nov. 6 general election.

White House officials contend the Supreme Court was a powerful motivator for Republican base voters in 2016, when Trump won the White House, and they're seeking to capitalize on Kavanaugh's nomination to help overcome an enthusiasm gap with Democrats. Likewise, a vote for Kavanaugh by either Tester or Heitkamp could frustrate a Democratic base eager for a more confrontational approach to the Trump administration.

Democrats question whether the Kavanaugh vote will resonate in the race to unseat Tester. He has emphasized his independence and willingness to cross the aisle to work with Trump, who carried Montana by 20 percentage points two years ago.

"It's not like you're standing in the grocery store line and people are talking about the Kavanaugh confirmation. It's pretty inside baseball for folks," said Barrett Kaiser, a Montana-based Democratic strategist. Kaiser said Tester had demonstrated a "proven bipartisan record of working with this administration when it helps Montana and oppose them when it doesn't."

Tester opposed Trump's first Supreme Court nominee, Neil Gorsuch, and the Republican tax bill, but took flak from the left for supporting a bill easing the rules on banks. He has a television ad promoting his collaboration with Trump as he seeks to inoculate himself against conservative critics.

Likewise, Heitkamp is locked in a tough re-election fight in heavily Republican North Dakota, where she narrowly won six years ago and now faces a more formidable opponent in Rep. Kevin Cramer. Cramer has been a fervent supporter of Trump, who remains popular in North Dakota.

During the rally, Trump claimed Democrats would "hurt" Social Security and "kill" Medicare. Trump promised during his 2016 campaign that he would save those programs.

Trump also warned that a Democratic-controlled Congress would pursue impeachment despite the strong economy and set a precedent that would hurt future presidents. A few Democratic lawmakers have called for Trump to be removed from office.

"Let's say a Democrat gets elected and let's say we have a Republican House. We will impeach that Democrat, right?" Trump said. "You're going to have a country that's going to turn into a third-world country because if the opposite party becomes president, every time before it even starts, before you even found out whether or not he or she is going to do a great job, they'll say, 'We want to impeach him!'"

"If it does happen, it's your fault because you didn't go out to vote," Trump said.

Trump also lit into Tester for his role in torpedoing Trump's nomination of Ronny Jackson to lead the Department of Veterans Affairs.

Earlier this year, Tester released unsubstantiated, anonymous allegations against Jackson that accused him of on-the-job drunkenness, overprescribing medication and fostering a hostile work environment. Jackson, a Navy rear admiral who was Trump's personal physician, denied the claims and eventually withdrew his nomination.

"What Tester did to Admiral Jackson should never, ever be allowed," Trump said, calling the allegations "lies."