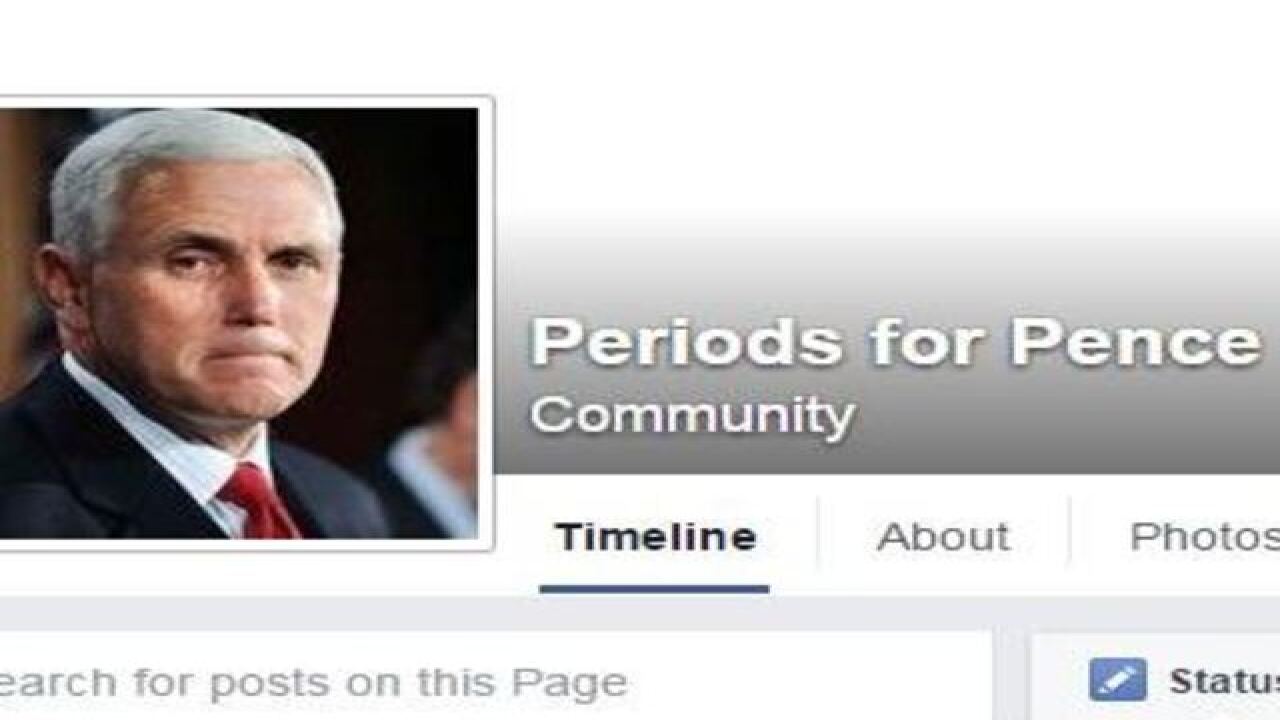 INDIANAPOLIS -- The Indiana governor's office has received several calls this week from women describing the details of their period.

"I need to get a message to the Governor that I am on day three of my period. My flow seems abnormally heavy, but my cramps are much better," one woman called to say.

The inspiration behind the calls came from a Facebook page called Periods for Pence.

Posted by Periods for Pence on Thursday, 31 March 2016

The page, just two days old, was created by a woman who suggested the idea to her husband after Gov. Mike Pence signed a controversial abortion bill into law last week.

HEA 1337 prohibits abortions on the basis of the race or sex of a fetus, or a potential disability.

"The more I read this bill, the more vague language I found and the more loopholes, and it just seemed incredibly intrusive. So I wanted to give a voice for women who really didn’t feel like they were given any kind of input into a bill that would affect our life so much," said the woman behind the page, who wanted to remain anonymous.

She says some people have disagreed with the idea, but most of the feedback she has received has been positive.

"Women are posting, some are private message and just not asking me to share, they just want to communicate that they’re trying to make a difference," the page's creator said.

Just got through to Governor Pence's office. (The operator must be on break.) Me: Hi, is this the operator, or the...

Posted by Periods for Pence on Wednesday, 30 March 2016

Me: "Good morning. I just wanted to call and let the good Governor know that I am still not pregnant, since he seems...

Them: Good Morning, Governor Pence's officeMe: Hi. I just found out that we should be reporting our periods to the...

Me: Hi, yes. I just got hired on permanently full-time from a contract position. Operator: Great, is there something I...

She says some men have even called Gov. Pence's office to tell them about their girlfriend's periods.

So far, the page has more than 2,000 likes. The ultimate goal, the creator says, is simple.

"Just really want the governor to understand that women do have a voice in Indiana."

“We are always willing to take calls from constituents who have questions, concerns or are looking for assistance," Stephanie Hodgin, Deputy Press Secretary for Gov. Pence, said in an email about the page and calls.