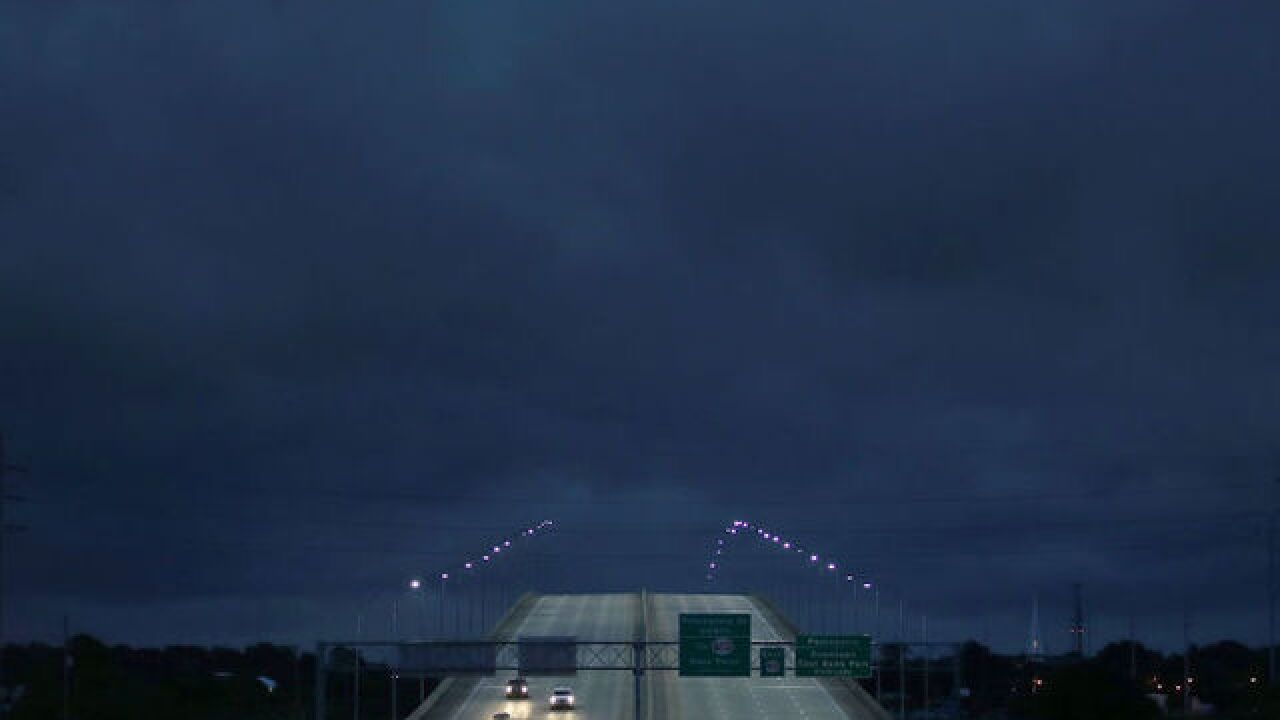 A child was killed Tuesday in Pensacola, Florida as Gordon whipped the Alabama and western Florida Panhandle coasts with tropical storm-force winds and heavy downpours, a spokeswoman with the Escambia County Sheriff's Office said.

The child, whose age and identity were not released, died when a tree fell on top of a mobile home. No one else inside the home was injured, spokeswoman Amber Southard said.

The storm's strong winds have knocked out power in the Florida Panhandle and southern Alabama leaving at least 20,000 people in the dark, several utility companies said.

As of late Tuesday night, Gordon was about 30 miles east of Biloxi, Mississippi, with sustained winds of 70 mph. The storm will move northwest Wednesday bringing rain and potential flooding to Hattiesburg and Jackson, Mississippi.

While Gordon is expected to weaken rapidly as it continues moving inland, authorities across the Gulf Coast and Florida Panhandle are warning residents about widespread flooding.

Gordon could drop heavy rain -- generally 4 to 8 inches, but as many as 12 -- from Florida's western panhandle to southern Arkansas through Thursday, the  National Hurricane Center said .

Seawater could spill onshore as high as 3 to 5 feet, spelling significant trouble for roads and towns along the coast.

"If you are less than 3 to 5 feet above sea level (in the warning area), you need to get away from that water, especially up those rivers, because that's where that water will be going," CNN meteorologist Chad Myers said.

Across the region, governments and residents made preparations Tuesday for the storm's arrival.

In Mobile, Alabama, people topped off their vehicles' tanks with gas.

"I just don't want to be caught somewhere where I have to leave and I can't because I don't have any gas," Cynthia James told  CNN affiliate WALA .

On Dauphin Island, Alabama, residents and visitors didn't seem overly concerned. Many businesses and homeowners did not board up their windows. They were likening conditions to 2017's Hurricane Nate, which was mostly a rainmaker by the time it got there.

In Bay St. Louis, Mississippi, workers cleared tables and chairs from the outdoor seating area of a bar. "This is a serious squall," said Raleigh Murphy, owner of Dan B's Restaurant and Bar. "It's part of life on the Gulf Coast, just something we have to deal with."

Murphy's bar opened last year for the first time since Hurricane Katrina; members of his family have owned it since 1982. The businessman said he was not overly concerned by Gordon's arrival.

He and his cousin, Lance, were relieved that the center of the storm was jogging more to the east. Lance Murphy, who referred to Gordon as a "party storm," said "We just live through it and hope we can open again tomorrow."

In coastal Mississippi's Jackson County, people filled bags with sand at government distribution points, intending to line their homes with them to avert flooding.

Among them was Jose Rivera, who moved from Puerto Rico to Mississippi after  Hurricane Maria devastated the island  last year,  CNN affiliate WLOX reported .

Rivera said he was worried about Gordon.

"He said he doesn't want the same thing that happened in Puerto Rico over here," Rivera's grandson, translating from Spanish, told the station.

The city expected to feel the storm's impact beginning late Tuesday and through Wednesday, she said. City Hall and government offices closed Tuesday for nonessential employees.

In anticipation of heavy rains, the Flood Protection Authority-East, or FPA,  closed 38 floodgates, 13 valve gates and a concrete barge gate  on the Lake Borgne Surge Barrier near New Orleans, according to a news release. Another seven floodgates and the Caernarvon Sector Gate were to be closed Tuesday.

The gates are in Orleans and St. Bernard parishes, primarily along the Industrial Canal and susceptible to high-tide conditions if not closed, the city said. Levee overtopping and breaches at these locations in 2005 led to devastating flooding from Hurricane Katrina in New Orleans' Lower 9th Ward, the city's eastern swath and in St. Bernard Parish.

Boats ordered out of the water in Biloxi and Gulfport

In Mississippi, vessels in the harbors of Biloxi and Gulfport were ordered to evacuate by Tuesday due to the risk from storm surge there.

"We're asking people to do the same things that we're doing: prepare," Biloxi Mayor Andrew "FoFo" Gilich said in a statement. "There's no reason to be alarmed. We're being told to expect rain and wind, and we're preparing accordingly. We expect our citizens to be doing the same."

Airlines including  Delta ,  Southwest  and  Frontier  warned that delays and flight cancellations were possible at airports near the Gulf Coast because of the storm, and that they may waive fees for itinerary changes.

A hurricane warning continued early Wednesday morning for all of coastal Mississippi and Alabama, with a tropical storm warning reaching from the Alabama-Florida border to Florida's Okaloosa-Walton county line.

A couple of  tornadoes are possible  near the Alabama and Florida coasts, the NHC said.