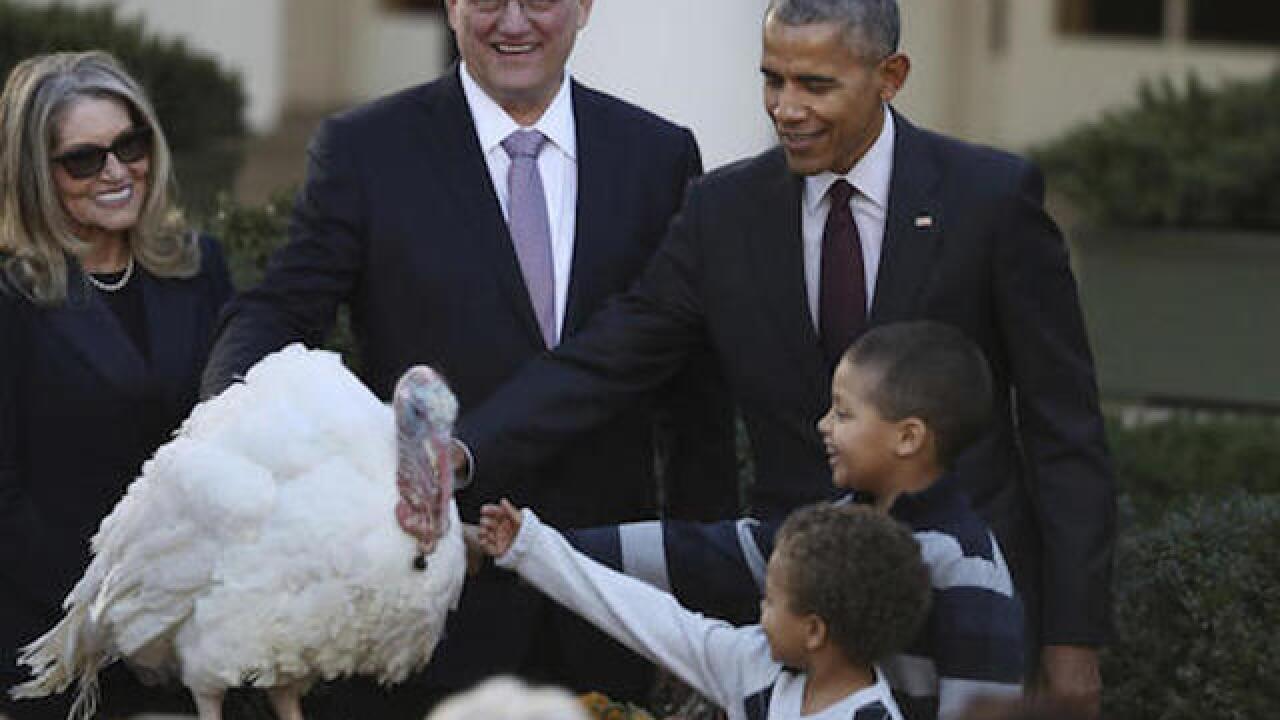 &lt;p&gt;President Barack Obama, with his nephews Aaron Robinson, front, and Austin Robinson and National Turkey Federation Chairman John Reicks, pardons the National Thanksgiving Turkey, Tot, Wednesday, Nov. 23, 2016, during a ceremony in the Rose Garden of the White House in Washington. This is the 69th anniversary of the National Thanksgiving Turkey presentation. (AP Photo/Manuel Balce Ceneta)&lt;/p&gt;

WASHINGTON (AP) — President Barack Obama got the holiday mood started at the White House on Wednesday with the traditional pardoning of the national Thanksgiving turkey, this time with his nephews standing in for daughters Malia and Sasha.

The light-hearted ceremony in the Rose Garden also featured Iowa-raised turkeys Tater and Tot, with the latter receiving the formal reprieve.

Obama said he has used the past pardoning ceremonies to embarrass his daughters with a cornucopia of bad jokes about turkeys. "This year, they had a scheduling conflict. Actually, they just couldn't take my jokes anymore," the president said.

The White House asked people on Twitter to vote for which turkey will receive the pardon, though both will get a reprieve. The White House even provided a biography for each bird to help voters with their decision. For example, Tater's favorite snack is worms. Tot prefers tomato slices. Each 18-week-old bird weighed in at about 40 pounds.

While only one could be named the "National Thanksgiving Turkey," the White House said that both birds will be sent to their new home at Virginia Tech's "Gobblers Rest" where they will be cared for by veterinarians and students.

The ceremony also gave Obama a chance to reflect on the spirit of Thanksgiving. Obama said it's a time to remember that "we have a lot more in common than divides us." He also challenged Americans to show the world that the United States is a generous and giving country, and to make sure everyone has something to eat on Thanksgiving.

After the ceremony, the president and first family will be volunteering at a community service event.

The National Turkey Federation began bringing live turkeys to the White House when President Harry S. Truman was in office. The White House Historical Association said Truman remarked they would "come in handy" for Christmas dinner. President John Kennedy spared the turkey presented to him in 1963, saying "let's keep him going." And President George H.W. Bush is credited with beginning the formal pardon tradition back in 1989, saying that year's bird was "granted a presidential pardon as of right now."