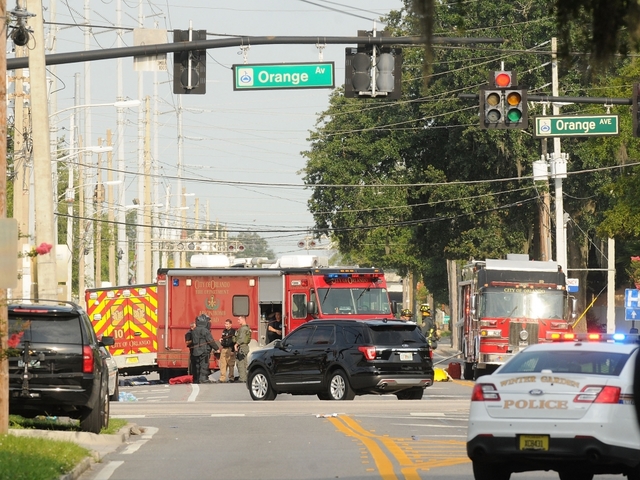 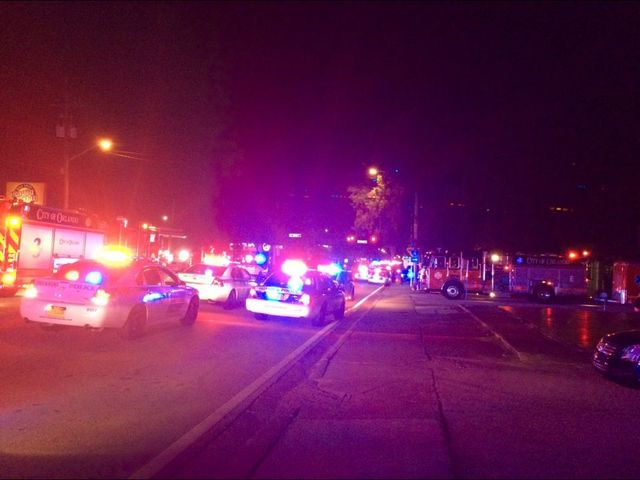 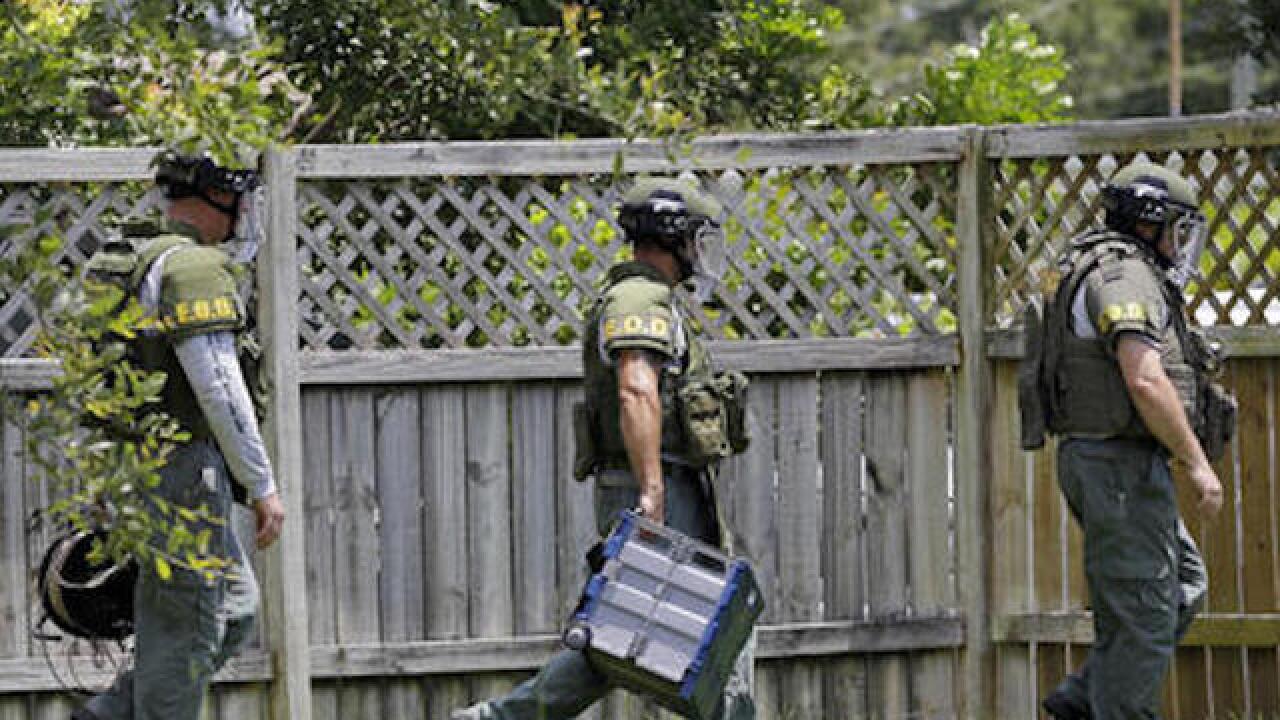 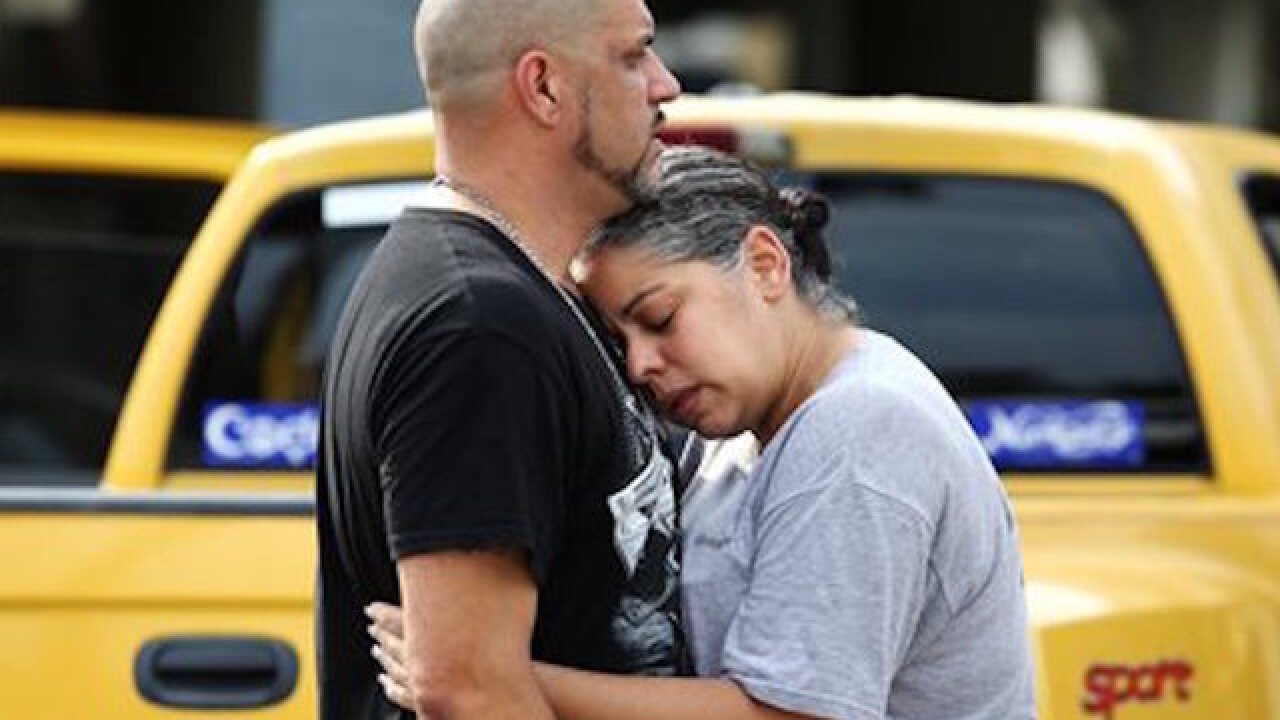 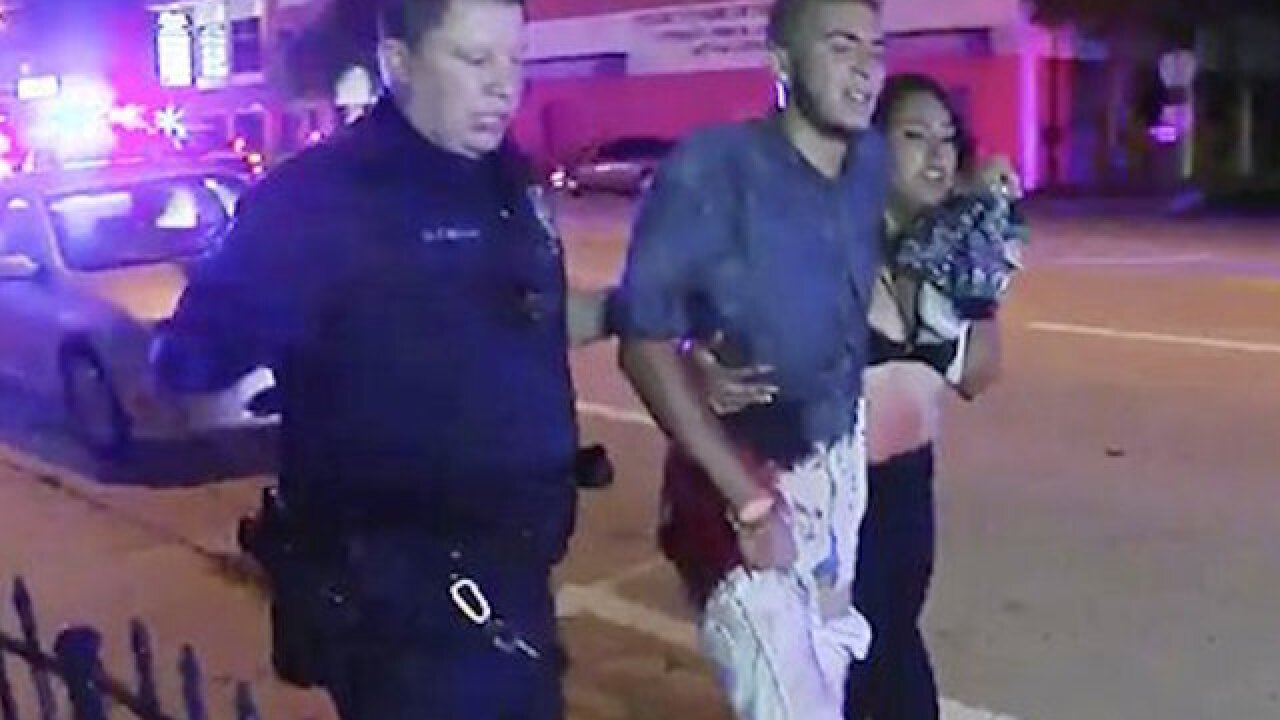 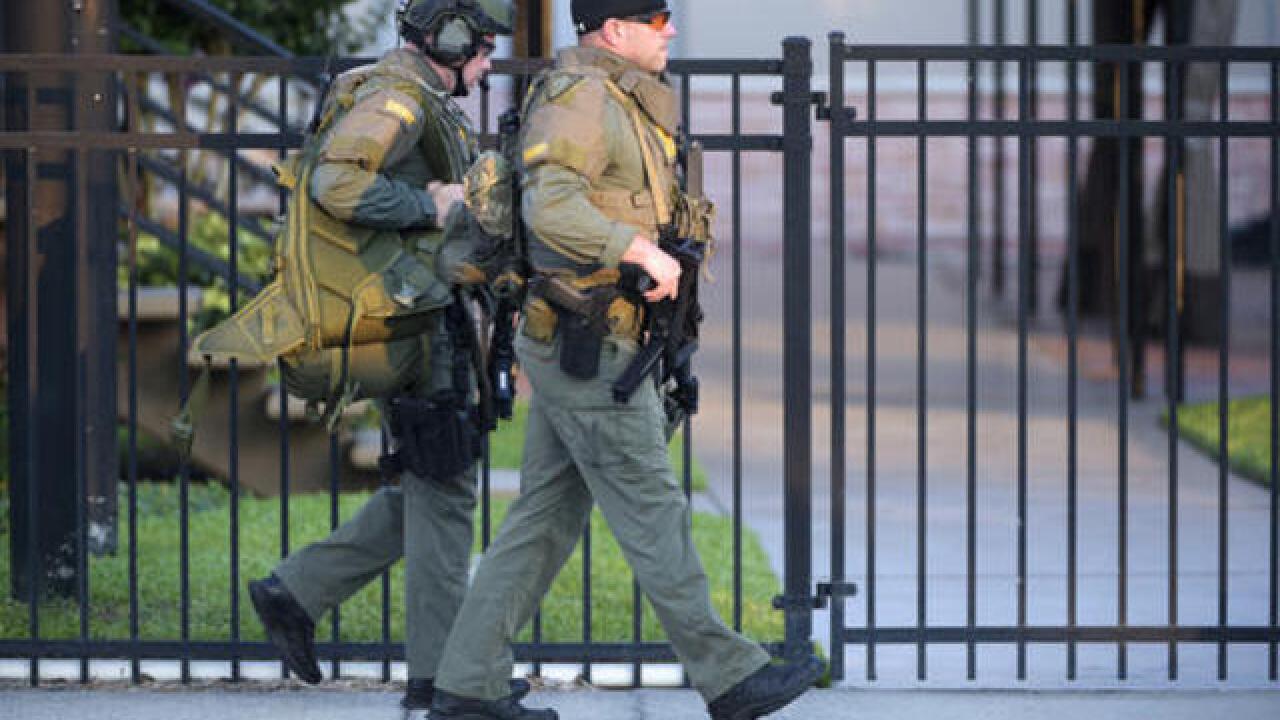 ORLANDO, Fla. (AP) — It had been an evening of drinking, dancing and drag shows. After hours of revelry, the party-goers crowding the gay nightclub known as the Pulse took their last sips before the place closed.

That's when authorities say Omar Mateen emerged, carrying an assault rifle and spraying the helpless crowd with bullets. Witnesses said he fired relentlessly — 20 rounds, 40, then 50 and more. In such tight quarters, the bullets could hardly miss. He shot at police. He took hostages.

When the gunfire finally stopped, 50 people were dead and dozens more were critically wounded in the deadliest mass shooting in modern U.S. history. Mateen, who law enforcement officials said had pledged allegiance to Islamic State in a 911 call around the time of the attack, died in a gun battle with SWAT team members.

Authorities immediately began investigating whether the assault was an act of terrorism and probing the background of Mateen, a 29-year-old American citizen from Fort Pierce, Florida, who had worked as a security guard. The gunman's father recalled that his son recently got angry when he saw two men kissing in Miami and said that might be related to the assault.

RELATED:
President Obama addresses the nation
Gunman's father stunned by shooting
OrlaThirty-nine of the dead were killed at the club, and 11 people died at hospitals, Mayor Buddy Dyer said.

Jon Alamo had been dancing at the Pulse for hours when he wandered into the club's main room just in time to see the gunman. "You ever seen how Marine guys hold big weapons, shooting from left to right? That's how he was shooting at people," he said.

"My first thought was, oh my God, I'm going to die," Alamo said. "I was praying to God that I would live to see another day."

Pulse patron Eddie Justice texted his mother, Mina: "Mommy I love you. In club they shooting." About 30 minutes later, hiding in a bathroom, he texted her: "He's coming. I'm gonna die." As Sunday wore on, she awaited word on his fate.

At least 53 people were hospitalized, most in critical condition, and a surgeon at Orlando Regional Medical Center said the death toll was likely to climb.

The previous deadliest mass shooting in the U.S. was the 2007 attack at Virginia Tech, where a student killed 32 people before killing himself.

Mateen's family was from Afghanistan, and he was born in New York. His family later moved to Florida, authorities said.

His ex-wife, Sitora Yusufiy, told reporters that her former husband was bipolar and "mentally unstable."

Mateen was short-tempered and had a history with steroids, she said in remarks televised from Boulder, Colorado. She described him as religious but not radical. He wanted to be a police officer and applied to a police academy, but she had no details.

The couple was together for only four months, and the two had no contact for the last seven or eight years, she said.

A law enforcement official said the gunman made a 911 call from the club in which he professed allegiance to the leader of the Islamic State, Abu Bakr al-Baghdadi. The official was familiar with the investigation, but was not authorized to discuss the matter publicly and spoke on condition of anonymity.

The extremist group did not officially claim responsibility for the attack, but the IS-run Aamaq news agency cited an unnamed source as saying the attack was carried out by an Islamic State fighter.

Even if the attacker supported IS, it was unclear whether the group planned or knew of the attack beforehand.

Mateen was not unknown to law enforcement: In 2013, he made inflammatory comments to co-workers and was interviewed twice, according to FBI agent Ronald Hopper, who called the interviews inconclusive. In 2014, Hopper said, officials found that Mateen had ties to an American suicide bomber, but the agent described the contact as minimal, saying it did not constitute a threat at the time.

. @orlandomayor Our community is strong. We will need to help each other's get through this. pic.twitter.com/XyUa8g5PT8

This is the email @ChiefJohnMina just sent to OPD personnel. https://t.co/SRuU8vJYcVpic.twitter.com/taZF1PbWe3

Asked if the gunman had a connection to radical Islamic terrorism, Hopper said authorities had "suggestions that individual has leanings towards that."

Mateen purchased at least two firearms legally within the last week or so, according to Trevor Velinor of the Bureau of Alcohol, Tobacco and Firearms.

In a separate incident, an Indiana man armed with three assault rifles and chemicals used to make explosives was arrested Sunday in Southern California and told police he was headed to a Los Angeles-area gay pride parade.

The Orlando shooting started about 2 a.m., with more than 300 people inside the Pulse.

"He had an automatic rifle, so nobody stood a chance," said Jackie Smith, who saw two friends next to her get shot. "I just tried to get out of there."

At 2:09 a.m., Pulse posted on its Facebook page: "Everyone get out of Pulse and keep running."

Club-goer Rob Rick said the shooting started just as "everybody was drinking their last sip."

When he heard shots, Rick dropped to the ground and crawled toward a DJ booth. A bouncer knocked down a partition between the club area and an area where only workers were allowed. People were then able to escape through the back of the club.

Mateen exchanged gunfire with 14 police officers at the club, and took hostages at one point. In addition to the assault rifle, the shooter also had a handgun and some sort of "suspicious device," the police chief said. About 5 a.m., authorities sent in a SWAT team to rescue the remaining club-goers, Police Chief John Mina said.

At first, officers mistakenly thought the gunman had strapped explosives to the dead after a bomb robot sent back images of a battery part next to a body, Orlando Mayor Buddy Dyer said. That prevented paramedics from going in until authorities determined the battery was something that fell out of an exit sign or a smoke detector, he said.

The robot was sent in after SWAT team members put explosive charges on a wall and an armored vehicle knocked it down in an effort to rescue hostages.

Just before 6 a.m., the Pulse posted an update on its Facebook: "As soon as we have any information, we will update everyone. Please keep everyone in your prayers as we work through this tragic event. Thank you for your thoughts and love."

Authorities were looking into whether the shooter acted alone, according to Danny Banks, an agent with the Florida Department of Law Enforcement.

"This is an incident, as I see it, that we certainly classify as domestic terror incident," Orange County Sheriff Jerry Demings said.

Mateen's father, Seddique Mir Mateen, told NBC News about his son seeing the men kissing a couple of months ago.

"We are saying we are apologizing for the whole incident," Seddique said. "We are in shock like the whole country."

Mateen was a security guard with a company called G4S. In a 2012 newsletter, the firm identified him as working in West Palm Beach. In a statement sent Sunday to the Palm Beach Post, the company confirmed that he had been an employee since September 2007. State records show that Mateen had held a firearms license since at least 2011.

President Barack Obama called the shooting an "act of terror" and an "act of hate" targeting a place of "solidarity and empowerment" for gays and lesbians. He urged Americans to decide whether this is the kind of "country we want to be."

Authorities said they had secured a van owned by the suspect outside the club. Meanwhile, a SWAT truck and a bomb-disposal unit were on the scene of an address associated with Mateen in Fort Pierce, about 120 miles southeast of Orlando.

Across the country, police departments stepped up patrols in neighborhoods frequented by the LGBT community.