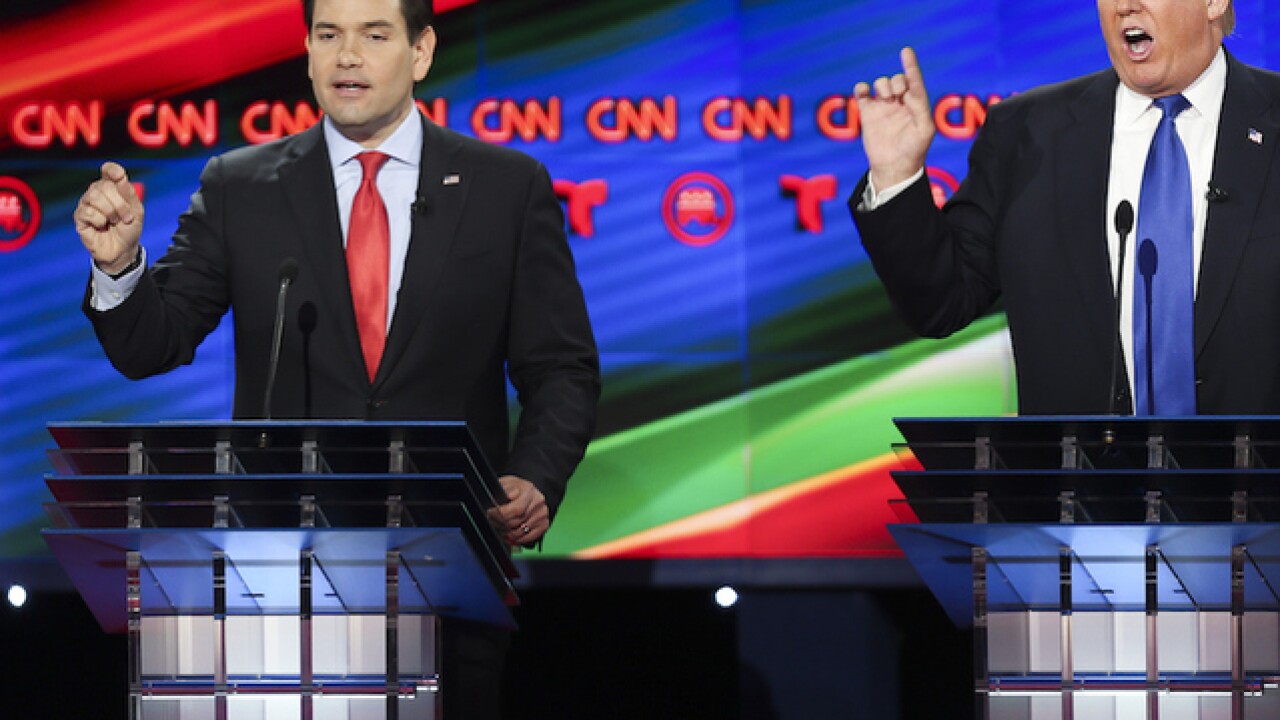 Copyright Getty Images
&lt;p&gt;Donald Trump (R) and Sen. Marco Rubio (R-FL) talk over each other at the Republican presidential debate at the Moores School of Music at the University of Houston on February 25, 2016 in Houston, Texas. The debate is the last before the March 1 Super Tuesday primaries. (Photo by Michael Ciaglo-Pool/Getty Images )&lt;/p&gt;

Florida Sen. Marco Rubio took an outsize swing at a provision of Obamacare as GOP presidential candidates hammered their favorite target during the CNN debate in Houston.

Did Obamacare contain a bailout for insurance companies, and did Rubio and congressional Republicans get rid of it? In short, they postponed a provision of the law, but it wasn’t a bailout.

Risky business
What Rubio calls a bailout is actually a part of the Affordable Care Act known as "risk corridors."

When the health care law started requiring insurance companies to sell policies to everyone (even sick people with pre-existing conditions), those companies were caught in a tough spot. They didn’t know how much to charge in premiums to cover expenses for all those new policies.

This story first appeared at PolitiFact.com

So the law set up a three-year period, from 2014 to 2016, during which the government would spread the risk for insurers in the new law’s marketplaces while they adjusted premiums. This program is known as risk corridors.

That’s the bailout to which Rubio is referring. He started calling it a "bailout" for unsuccessful insurance companies in 2013, the same year he introduced an ill-fated bill in the Senate to repeal the program.

But let’s be clear: Several experts told us risk corridors aren’t a bailout. A bailout is usually a program that saves a company after the fact. Risk corridors are a mechanism that was put in place to deal with a problem that everyone assumes could occur.

And they aren’t new, either. The risk corridors program was modeled after a successful plan that was part of George W. Bush’s Medicare Part D prescription drug coverage, albeit slightly different than the Obamacare version. No one referred to that as a bailout.

Finding money for payments
Now, part of the problem is that the the health care law didn’t say where it would get the money for any risk corridor payments. Remember those user fees from successful insurers? The Centers for Medicare and Medicaid Services, or CMS, later decided they would use that money to make any payments owed to insurers that weren’t so successful.

In 2013, CMS said insurers who said they needed money would get it, "regardless of the balance of payments and receipts" in the program. Rubio took this to mean that if there wasn’t enough money from user fees to cover the payments, the White House would ask Congress for money -- that is, tax revenue.

CMS said in April 2014 it wouldn’t ask Congress for an appropriation, but instead would make up the difference in later years if the marketplace didn’t bring in enough user fees. Rubio went to work, urging then-Speaker of the House John Boehner in October 2014 to block potential tax money appropriations for risk corridor payments.

That’s what Congress did. When lawmakers passed a spending bill in December 2014, it included special language called a "rider" that said the CMS’ parent agency, the U.S. Department of Health and Human Services, could not use any extra money in its budget to pay risk corridor expenses. That effectively locked CMS into its stated plan of using user fees. (The same rider was included in the 2015 spending bill.)

Some legislators have credited Rubio with inspiring this language, although there have been questions about how much credit he can take. Rubio reintroduced his bill to repeal risk corridors.

By October 2015, it became apparent the risk corridors program didn’t work so well in the first year. CMS announced the program took in $362 million in user fees for 2014, while less successful insurers asked for a total of $2.87 billion, leaving a $2.5 billion shortfall CMS can’t pay.

CMS said it would pay out 12.6 percent of claims from 2014, then wait to see next year’s results. Some insurers left the marketplaces or even collapsed altogether, leading Rubio to crow his actions have been "a big part of ending Obamacare for good." (We likely won't know what the program took in for 2015 until fall 2016, and 2016’s totals until 2017.)

Whether it will really kill Obamacare is up for debate. Some legal scholars have said all the rider did was highlight a problem the law already had and prevent a workaround. Two years ago, the Congressional Budget Office said the risk corridors will likely eventually break even by 2016.

If the program doesn’t, CMS will have to find the money somehow or ask Congress to make an appropriation to pay insurers. Otherwise, insurers could sue to get those payments. An Oregon insurance company that is no longer offering marketplace plans did just that on Feb. 24, suing the government for $5 billion over missed risk corridors payments.

Rubio said, "When they passed Obamacare, they put a bailout fund in Obamacare. … We led the effort and wiped out that bailout fund."

The "bailout fund" is actually a provision in the Affordable Care Act called risk corridors, designed to temporarily aid insurers as they adjust premiums. Rubio helped persuade Congress to prevent Health and Human Services from being able to cover expenses its own budget.

But experts have said Rubio is wrong to call the program a bailout, and that the program is supposed to pay for itself through fees from insurers.

Furthermore, the program hasn’t been "wiped out." At best, Rubio and Congress have temporarily limited one potential way CMS could have covered insurance companies' losses. We’ll have to see what happens when the program expires after 2016 -- then any outstanding bills will be due, one way or another.