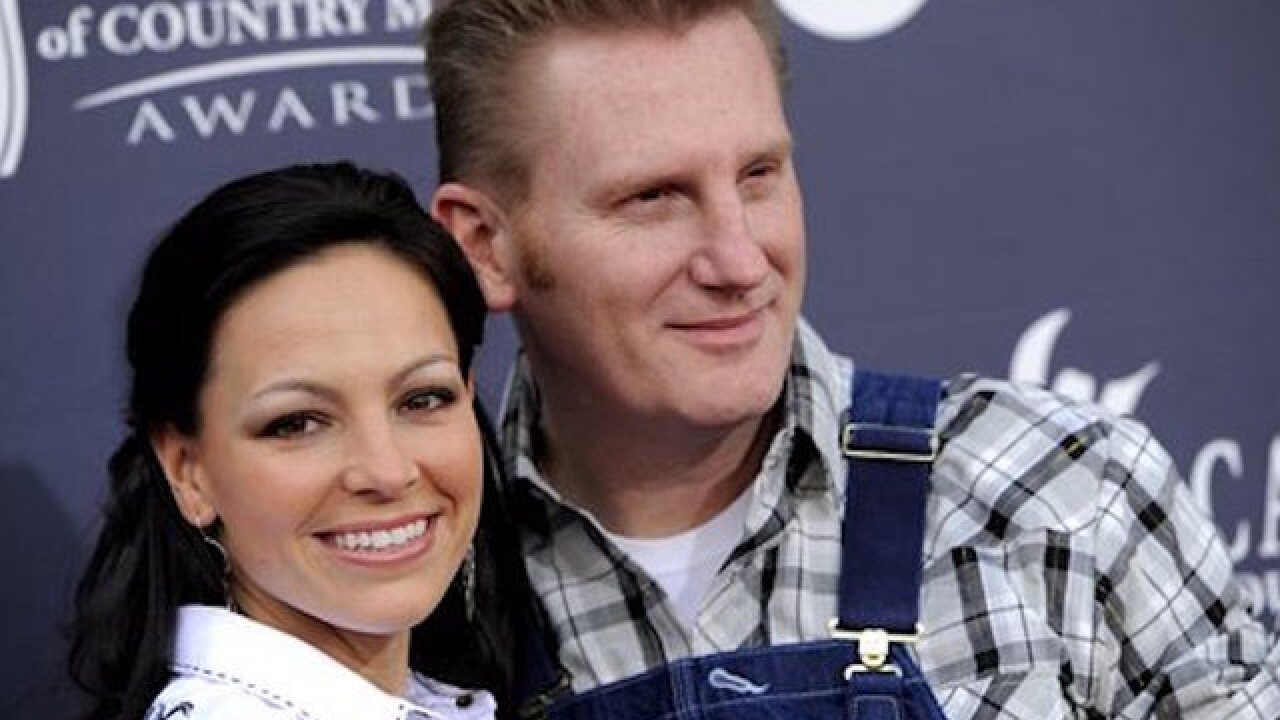 Feek, who had been diagnosed with cancer two years ago, died at home in Indiana, Aaron Carnahan said.

The brunette singer from Alexandria, Indiana, found success when she paired up with her songwriter husband on the Country Music Television singing competition "Can You Duet?" in 2008. Joey Feek sang lead and her husband, known for his sideburns and blond flaptop, provided harmonies on such traditional country songs as "That's Important to Me."

In 2014, she was diagnosed with cervical cancer, which continued to spread despite multiple surgeries, chemotherapy and radiation treatment. Last fall, Rory Feek wrote on his blog that they had decided to end treatment.

Even after the diagnosis, the couple continued to record, and an album of hymns topped the Billboard Top Country Albums chart in March. Since her diagnosis, the music community responded by honoring the couple with award nominations. Their song "If I Needed You" was nominated for best country duo/group performance at the Grammy Awards and they are also nominated at the 2016 Academy of Country Music Awards for vocal duo of the year.

They have a 2-year-old daughter, Indiana.

Their first album, "The Life of a Song," was a surprise hit in 2008 and earned them a spot opening for the Zac Brown Band on tour. Although their songs were never top airplay hits, the couple's plainspoken style and Joey Feek's sweet, smoky voice earned them a host of fans of traditional country and western music. And on "Cheater, Cheater" and other songs they showed they could also handle upbeat and witty material.

In a 2009 interview, Rory Feek told The Associated Press that being together all the time didn't make them get on each other's nerves.

"We're really good friends," Feek said, while cuddling his bride. "I know everybody says that, but you know, this is one of those times that everything we're doing, we are both interested in. We're both passionate about country music and we are both thrilled to be here and we really do get along well."

In the tradition of such couples as John and June Carter Cash and Faith Hill and Tim McGraw, their blended voices and deep bonds made them beloved by fans of country music.

"We're experiencing everything together," Joey Feek told The Associated Press in 2010. "That's been the highlight of it all."

The Feeks seemed like old friends to their fans and fellow Tennesseans. They met at a songwriters' night at Nashville's famed Bluebird Cafe, married in 2002 and lived on a farm in rural Pottsville, Tennessee, about 45 miles south of Nashville. Even as their fame was rising, the two opened a restaurant inside an old general store that became a community center. The restaurant and their community were featured in their music video, "This Song's For You." Tourists from all over would stop at Marcy Jo's Mealhouse to grab a bite to eat and maybe even spot Joey behind the counter.

They earned three nominations, including for the fan-voted new artist of the year, during the 2010 Academy of Country Music Awards and won the Top New Vocal Duo of the Year award. They followed up with "Album Number Two," in 2010, then released a Christmas album in 2011 and a collection of gospel songs, "Inspired," in 2013.

Rory Feek documented his wife's cancer diagnosis and treatment on his blog, http://thislifeilive.com .