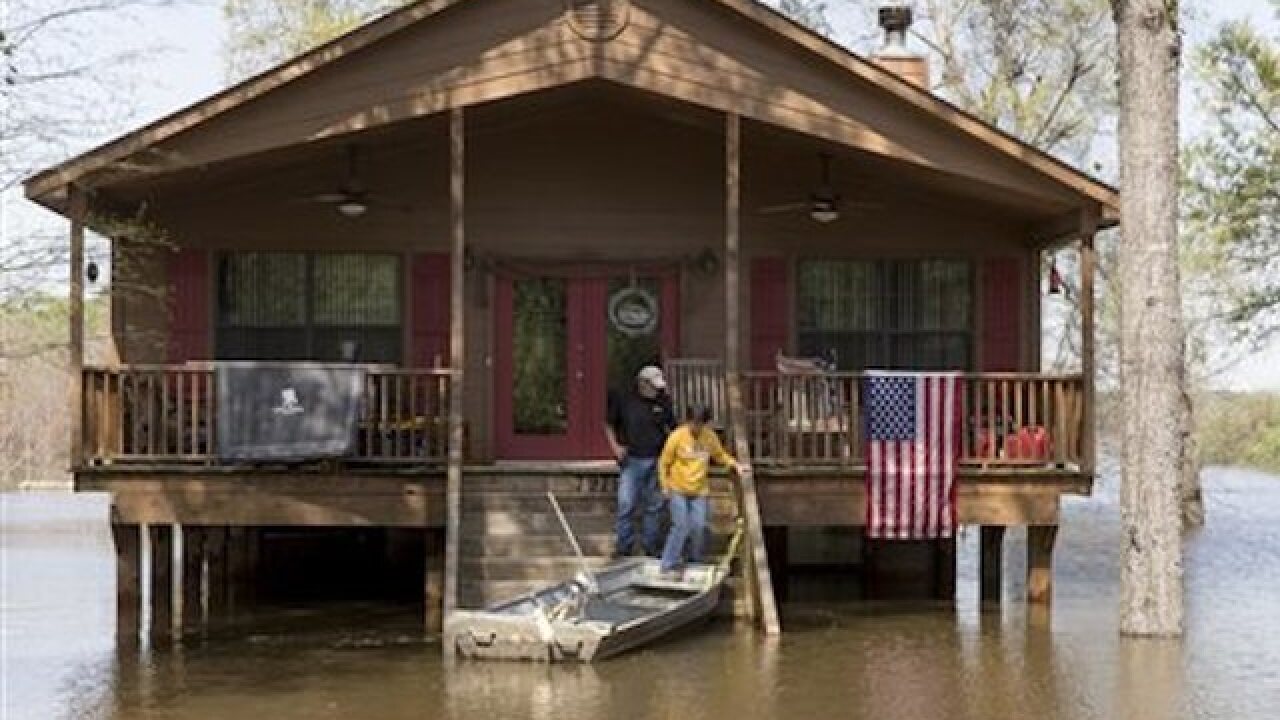 NEW ORLEANS (AP) — Emergency officials in Louisiana and Mississippi were watching the rise of the Pearl River which divides the two states Monday amid widespread flooding that has damaged thousands of homes.

The National Weather Service predicts the Pearl River could reach 21 feet by Monday afternoon — the height of the 1983 flood. This could mean 100 to 200 homes could take on water around Pearlington, Mississippi.

At least four deaths have been reported in Louisiana amid the flooding that began last week, and the National Guard has rescued nearly 3,300 residents. Two fishermen have been missing for days in Mississippi.

In Louisiana, St. Tammany Parish officials said the town of Pearl River in the eastern part of the parish was already seeing some flooding in one neighborhood.

Farther to the south, officials were warning residents in eastern Slidell to be vigilant about rising water Monday.

Tangipahoa Parish officials were warning those in the southern part of the parish about a rise of the Tangipahoa River.

Flood warnings were in effect across the region as many rivers remained dangerously high. Also of concern was another line of thunderstorms that hit parts of Oklahoma, Arkansas, northern Louisiana and northern Mississippi on Sunday night, bringing more rain and reports of tornadoes in Arkansas. No injuries or damage was reported.

"At this point, any rain will aggravate the flooding situation," Davyon Hill, a meteorologist with the National Weather Service in Shreveport, said.

Downpours — part of a system that affected Louisiana, Mississippi, Arkansas, Tennessee and Alabama — have submerged roads and cars, washed out bridges and forced residents to flee homes.

Louisiana emergency officials said more than 4,958 homes were damaged. That number is expected to rise as more reports come in from areas still battling floodwaters. Mississippi reported that 185 homes were damaged by floodwaters and about 650 homes sustained minor damage.

Louisiana Lt. Gov. Billy Nungesser said he was worried that many flood victims had not purchased flood insurance.

"A lot of these people I spoke to did not have flood insurance because they had never flooded before," Nungesser said in a telephone interview.

He warned that residents may not get federal disaster aid if they didn't have insurance. "It's not going to be the open check book," he added.

Authorities in Louisiana's Natchitoches Parish said Harold Worsham, 78, drowned while trying to flee floodwaters on Saline Bayou. The sheriff's office said Worsham was in a boat that capsized as he and two others were moving items from a home onto an aluminum boat. At least three others have died in the state.

On Sunday, Mississippi officials said they were still looking for two missing fishermen but had no reports of injuries or deaths there.

It's the most widespread non-hurricane flooding the Louisiana National Guard has ever dealt with, said Col. Pete Schneider, a guard spokesman.

The National Guard said it had about 1,400 soldiers and air crews at work in flooded areas throughout Louisiana, deploying in high-water vehicles, boats and three helicopters. National Guard crews had evacuated more than 3,295 people and 316 pets as part of its round-the-clock operations by Sunday morning.

Sunday night, officials said reports of a breached levee prompted evacuations in a rural northeastern Louisiana community, but residents were allowed to return to their homes after flooding was less severe than expected.