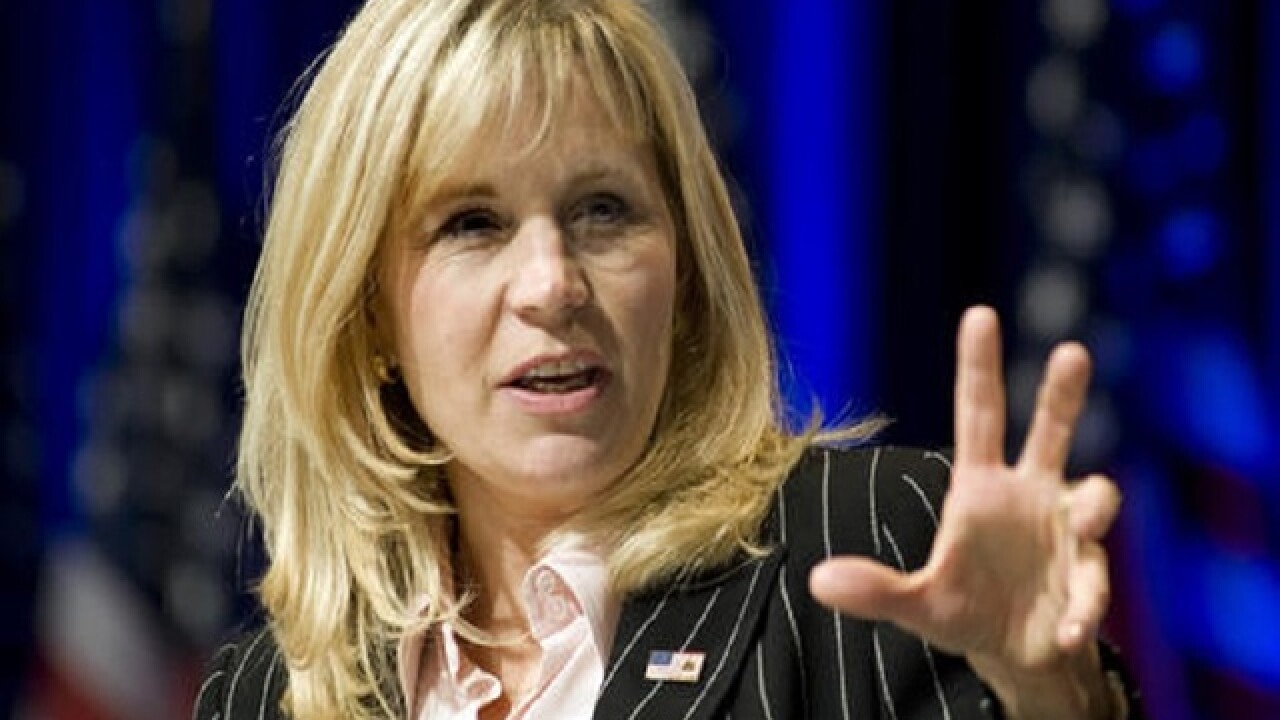 CHEYENNE, Wyo. (AP) — Liz Cheney, daughter of former Vice President Dick Cheney, swept to victory Tuesday in a crowded race for the Republican nomination for Wyoming's lone seat in the U.S. House — a post once held by her father.
Liz Cheney's victory in the Republican primary likely signals that she will win the seat in the general election this fall. Party registration favors the GOP over Democrats better than three-to-one in Wyoming and no Democrat has held the seat since Dick Cheney's predecessor in the 1970s.
In an interview with The Associated Press, Liz Cheney said Tuesday that she couldn't be prouder of being Dick Cheney's daughter.
"Certainly we've been served well by many people in Washington, and it is very special to have been nominated to serve in the seat that my dad held," she said.
Her victory also marks a comeback from her first shot at Wyoming politics in 2014, when she brashly challenged Sen. Mike Enzi, the state's senior Republican.
Many prominent Wyoming Republicans accused Liz Cheney two years ago of being a "carpetbagger" and criticized her for challenging GOP incumbent Enzi when she had only recently moved to Wyoming from Virginia. She quickly dropped out of the race.
This time around, however, she and seven other Republicans were vying for an open House seat. Rep. Cynthia Lummis' is not seeking re-election.
A former Fox News commentator and State Department official, Liz Cheney drew on her national contacts in funding her primary victory. She brought in more than $1.5 million through July, banking almost 10 times more money than her next three opponents combined.
While her opponents tried to hammer on her relatively short residency in the state, Liz Cheney herself focused her campaign largely on attacking President Barack Obama and his administration's energy policies — which she considers federal overreach — and national security policies.
She has emphasized that it's critical to Wyoming, the nation's leading coal producing state, that the EPA roll back regulations sharply limiting emissions from coal-fired power plants. Major coal companies have declared bankruptcy in recent months and Wyoming has seen sharp layoffs among coal industry workers.
"We've got to be sure that we save the coal industry, it's a hugely important issue for Wyoming," Liz Cheney said. "Wyoming's representative has got to be somebody who's prepared to lead that fight on a national basis, and I will do so absolutely, no matter who's in the White House."
Dick Cheney was elected five times to the U.S. House seat for Wyoming that his daughter is now seeking. But his legacy cuts both ways. Many Democrats have criticized Cheney's orchestration as vice president of the 2003 U.S. invasion of Iraq, calling it a disastrous foreign policy decision.
Asked if her candidacy serves as a way to try to address criticism of her father's role in the Iraq invasion, Liz Cheney said her campaign has been doing what's necessary to keep the U.S. safe.
"We're facing a huge number of challenges now, both in terms of the threats we face from Washington, as well as the threats to our security from radical Islamic terrorism, and those are the things I'm going to be focused on," she said.
Ryan Greene won the Democratic nomination for Wyoming's U.S. House seat and will face Cheney in the general election. Greene is a manager in his family's oilfield services company in Rock Springs.
Greene said Tuesday night he is "very excited about the way the results came in."
"This just became Wyoming versus Washington. The Cheneys are Washington," Greene said. "We've got a lot of work to do, but we're going to continue to work hard, and we're going to show the nation that our state's not for sale."
Copyright 2016 The Associated Press. All rights reserved. This material may not be published, broadcast, rewritten or redistributed.