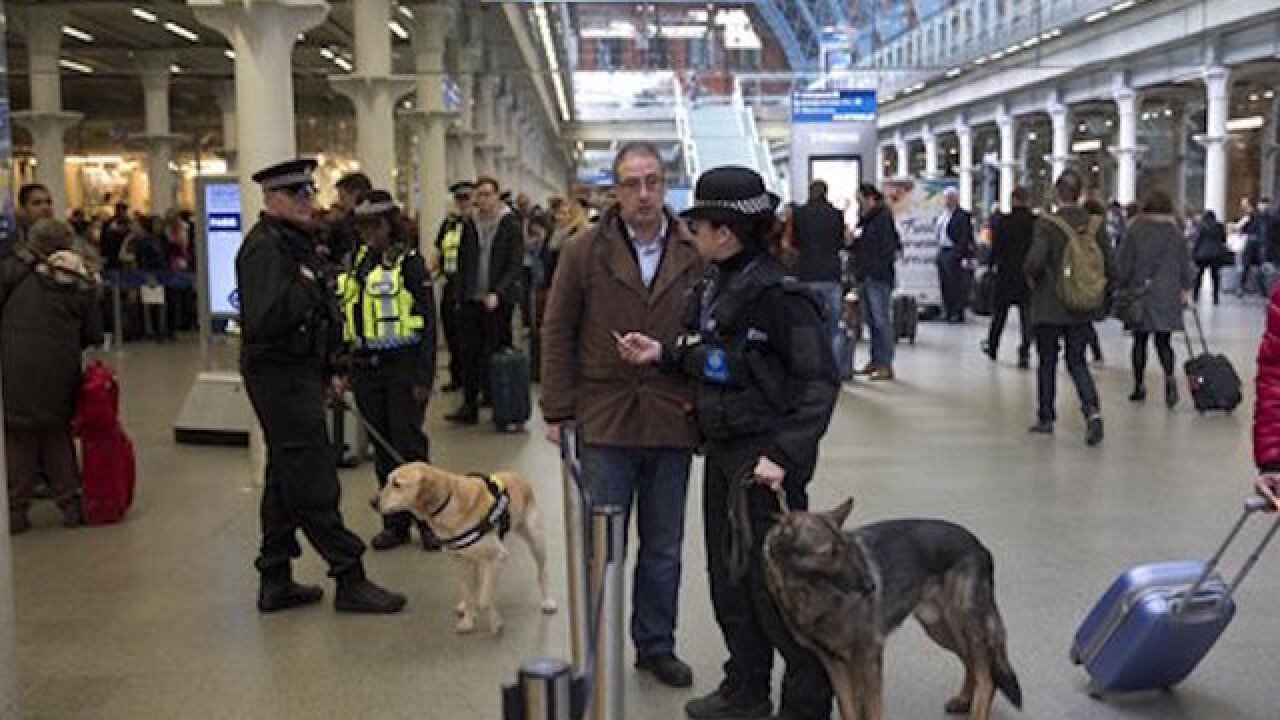 &lt;p&gt;Police dog handlers speak to travelers as they patrol after Eurostar train services were suspended on the Brussels route because of the attacks in Belgium, at St Pancras international railway station in London, Tuesday, March 22, 2016. Explosions, at least one likely caused by a suicide bomber, rocked the Brussels airport and subway system Tuesday, prompting a lockdown of the Belgian capital and heightened security across Europe. (AP Photo/Matt Dunham)&lt;/p&gt;

WASHINGTON (AP) — Democrats said Tuesday they will push proposals to boost security at airports, train stations and other transportation hubs in response to attacks in Brussels and elsewhere.

The initiatives outlined by Democratic senators would double the number of government "viper teams" that stop and search suspicious passengers in public areas before screening, often using bomb-sniffing dogs, from 30 to 60. They also want more federal grants to train law enforcement officers in how to prepare for and respond to shootings at vulnerable targets such as transportation hubs and other "soft targets."

Democrats plan to add the ideas to an aviation policy bill under consideration in the Senate, along with a bipartisan measure to tighten the screening of airport workers.

The screening bill, passed by the Senate commerce committee in December, would give the Transportation Security Administration ready access to additional terrorism-related databases maintained by the intelligence community when vetting airport workers. It also would let TSA conduct real-time, continuous criminal records checks through the FBI and expand the list of criminal convictions that would make a potential airport worker ineligible for security clearance.

Another bill passed by the House last year with bipartisan support that seeks to expand the number of passengers enrolled in TSA's expedited clearance programs is also expected to be offered for inclusion in the aviation bill.

The aviation bill would extend the Federal Aviation Administration's authority to operate, due to expire July 15, through Oct. 1, 2017. It also contains provisions that lawmakers have been working on for more than four years to address aviation issues, including greater access for drones to the national airspace and protections for airline passengers chafing at fees for basic services such as checked bags and ticket changes.

Sen. John Thune, R-S.D., chairman of the Commerce, Science and Transportation Committee, said Tuesday that he would prefer to deal separately with the security proposals. The proposals have wide support and are expectedly easily pass the Senate. However, he didn't say he'd oppose their inclusion in the aviation bill.