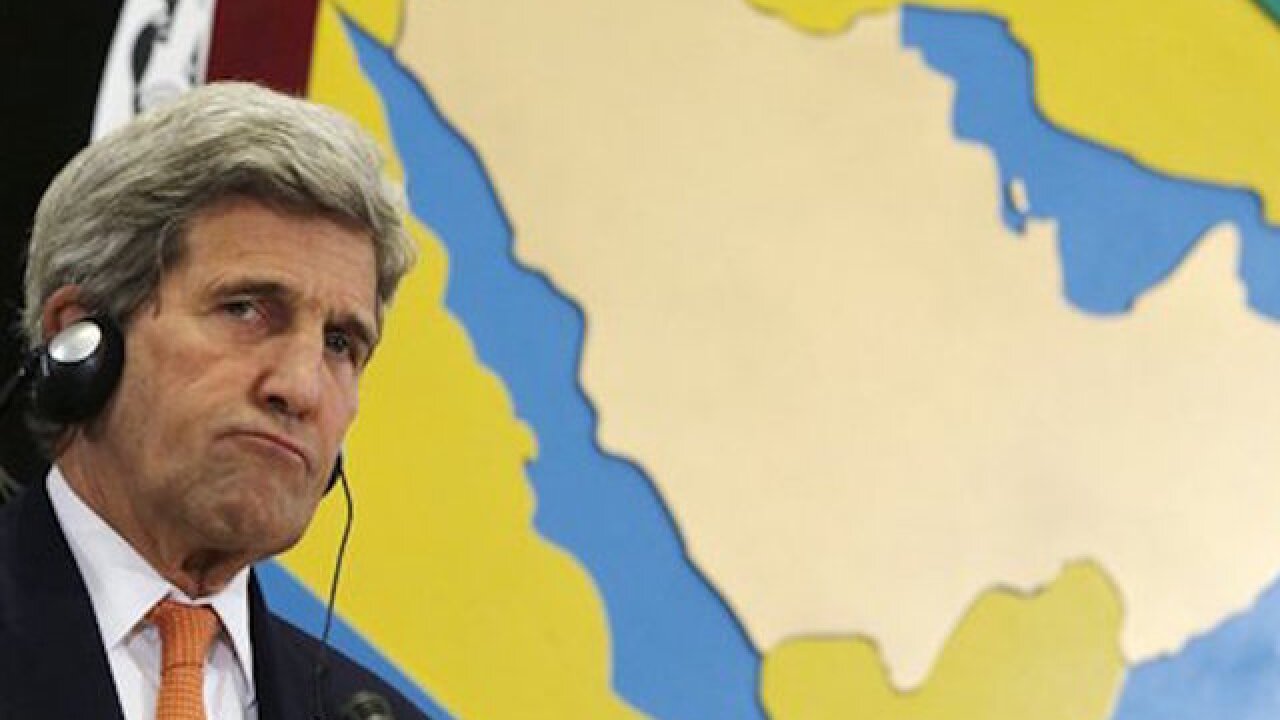 BAGHDAD (AP) — U.S. Secretary of State John Kerry made an unannounced stop in Baghdad on Friday to meet Iraq's prime minister and other top officials at a time of increased military momentum against the Islamic State but deep political uncertainty in the unstable country.

Kerry was to speak with Prime Minister Haider al-Abadi as well as Iraq's foreign minister, top Sunni official and a Kurdish regional leader, in a show of support for the Iraqi government as it tackles ongoing security, economic and political challenges.

Iraq's government must "unify and rebuild its country and reclaim territory that was occupied by Daesh," Kerry said Thursday in Bahrain, using an Arabic acronym for the Islamic State. He said Iraq's neighbors also "need to support the Abadi government in its efforts to stabilize and eventually rebuild the country," stressing the importance of bringing order to Sunni-majority areas as they become liberated from IS control.

Kerry's trip coincides with military advances. Iraqi forces say they entered the strategically important IS-held town of Hit on Thursday, while the Pentagon is considering establishing more small military outposts to provide artillery support and other aid to Iraqi forces readying an assault on Mosul, IS' stronghold in the country. Last month, the U.S. opened the first such base since returning to Iraq in 2014.

But al-Abadi faces challenges of his own, still trying to establish a new Cabinet amid pressure from supporters of a hard-line Shiite cleric who last month staged rallies and a sit-in next to the government headquarters to demand reforms. A prolonged standstill could severely hamper al-Abadi's ability to effectively lead a country that has often broken down along sectarian divisions since the U.S.-led overthrow of Saddam Hussein some 13 years ago.

Corruption is at the heart of the internal debates.

Last August, al-Abadi proposed a sweeping reform package to combat corruption, cut government spending and merge ministries, but his efforts have been stymied by sectarian tensions and struggles to contain the Islamic State. Its forces swept across much of northern and western Iraq in the summer of 2014. While Iraqi authorities have waged a full-scale war, aided by U.S. airstrikes, the Kurdish peshmerga forces, Shiite militias and pro-government Sunni fighters, the extremist group still holds significant territory.

Kerry arrived Friday after attending a meeting with Persian Gulf allies in the Bahraini capital of Manama, where the fight against IS figured prominently among American concerns. But the Sunni monarchies of the region are facing their own distractions, with nascent peace efforts to end civil wars in Syria and Yemen, and shared fears about Shiite Iran's interference in their affairs.

The U.S. is trying to speed up the path to victory. Although the Islamic State has lost some 40 percent of its territory in Iraq and maybe a fifth of lands it once controlled in Syria, it continues to prove a magnet for foreign fighters, some of whom may now be returning to Europe and elsewhere with plans to kill civilians. And experts say IS' staying power may be inspiring others, who've never been in contact with the group, to wage violence in its name. Recent attacks in Brussels, Paris and California underscore Western fears.