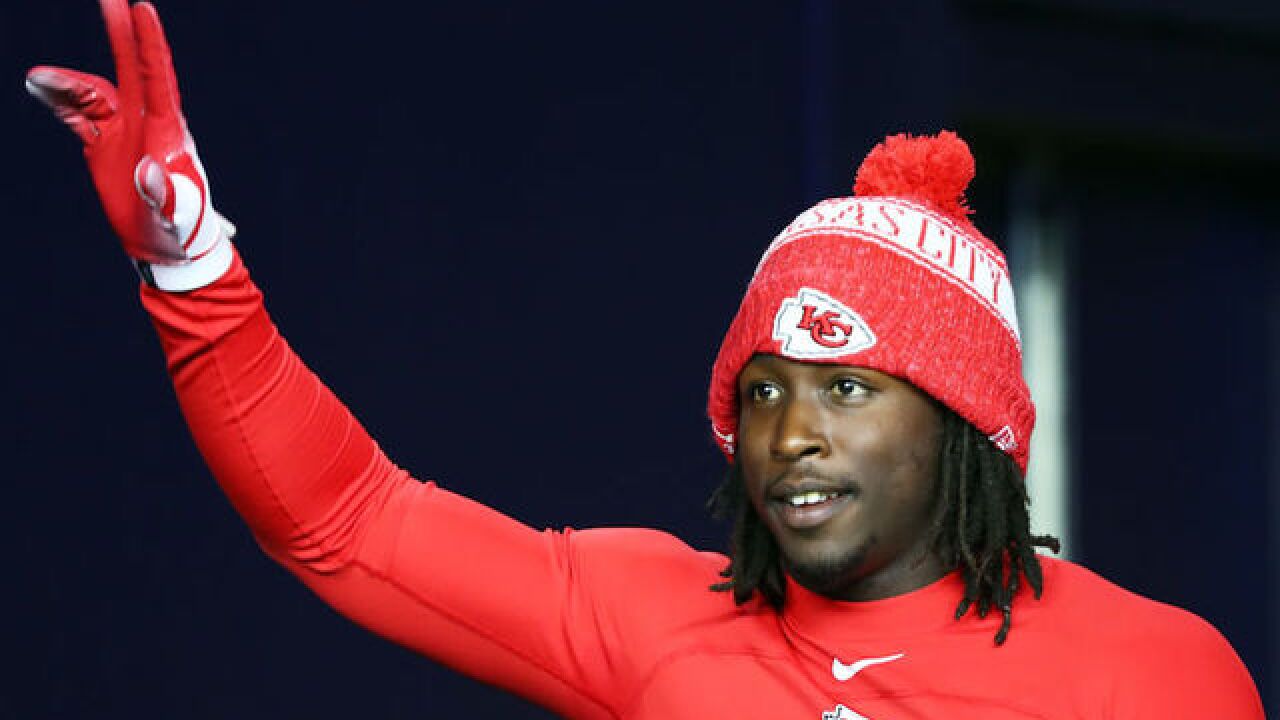 Image copyright 2018 Getty Images. All rights reserved. This material may not be published, broadcast, rewritten, or redistributed.
&lt;p&gt;Kareem Hunt gestures before a game against the New England Patriots at Gillette Stadium on October 14, 2018 in Foxborough, Massachusetts. &lt;/p&gt;

Former NFL running back Kareem Hunt was accused of kicking a man at a nightclub in Kansas City, Missouri, in January 2018.

The incident is the latest to come to light allegedly involving Hunt since video surfaced Friday showing him physically assaulting a woman in February. Three incidents of violence involving Hunt have been documented this year.

No charges were filed in any of the cases. The Kansas City Chiefs released Hunt on Friday after TMZ posted the video. Hunt asked for forgiveness Sunday in an ESPN interview and admitted to lying to the Chiefs about the incident.

"I'm asking for forgiveness and I definitely believe I deserve forgiveness," Hunt told ESPN. "Everything is really happening fast right now, and I just want everybody to forgive me."

Here is what we know about three incidents in which Hunt's name came up in 2018.

A man walked in to a Kansas City police station on January 11 to report that he was assaulted on January 7 at a nightclub by several people, including Hunt and his teammate George Atkinson, according to a police incident report.

The 37-year-old man said he broke his nose and a rib in the encounter, which began when Atkinson and two others shoved a friend of his, the report states.

The man said he was intoxicated as he tried to intervene. He says Atkinson punched him in the shoulder and he punched him back in the face, according to the report.

More suspects "appeared from 'all over' and 'jumped' him as he fell to the ground," the man told police. While he was down, the suspects struck his body and head multiple times, he said. The man told police the majority of blows came from kicks from the suspects, including Hunt, according to the police report.

The man told police he thought he was unconscious for a short period. Club security escorted him out, and others told him that six to eight people were involved. He was treated at a local hospital.

Initially, he did not want to go to police, the report states, but his relatives convinced him to report the allegations.

After speaking to police, the man declined to prosecute the case, and the case was closed, Kansas City police spokesman Sgt. Jake Becchina. Police were never called to the scene, and there is no known video of the incident.

CNN reached out to the man who reported the incident, the NFL, the Chiefs, and a representative for Hunt about the report, but did not receive responses. Atkinson, Hunt's Chiefs teammate, also could not be reached for comment.

Surveillance footage captured the February 10 incident in a luxury hotel, according to police reports.

The video shows Hunt shoving the woman several times in a hotel hallway while people try to hold him back. At one point, the woman appears to stumble, and as she attempts to get up, Hunt kicks her back down.

Dispatchers received the first call about the incident at 3:42 a.m.

"I was assaulted and I need help," said the woman.

"I think his first name is Kareem," she said when asked who assaulted her.

The woman told the dispatcher that "things went wrong" as she and her friends met with Hunt's friends to go out.

A second call came in at 3:55 a.m. from a man named Derek who did not want to give his last name. He said there were "two women that have bruises and cuts all over them."

A third call came in at 4:13 a.m. from another man who identified himself as the evening security officer at the hotel. He told the dispatcher that two women got into an altercation after coming back from a nightclub.

"I've been trying to figure out what the heck's been going on," he said.

According to the police report, friends and family of the women arrived to pick them up, and they were allowed to leave.

No arrests were made. A spokeswoman for the Cleveland Police Department told CNN on Tuesday that since the incident was considered a misdemeanor, the onus would have been on the accuser to go to prosecutors if she wanted to pursue charges.

Sgt. Jennifer Ciaccia told CNN that nobody within the department had reviewed the video until TMZ posted the footage.

After the video went public Friday, the Chiefs released a statement saying they were made aware of the incident earlier this year.

The NFL and law enforcement began investigating while members of the Chief's management team spoke directly to Hunt, the team said.

"Kareem was not truthful in those discussions. The video released today confirms that fact. We are releasing Kareem immediately."

The NFL began an investigation "immediately following the incident in February," NFL spokesman Brian McCarthy said after the video went public Friday. The investigation will include a review of the new information that was made public today," McCarthy said on Twitter.

In an interview with ESPN, Hunt admitted to lying to the Chiefs about the incident. But said he had not been questioned about it by the league.

"The Chiefs are right; I didn't tell them everything," he said on ESPN's "Sunday NFL Countdown" in an interview that he requested. "I don't blame them for anything. My actions caused this.

"I know it's going to be hard. I made a bad choice and I'm not going to let this bring me down."

Hunt was still on the Chiefs' roster on June 3 when police in Put-in-Bay, Ohio, responded to what the department called a "minor altercation" at a local establishment.

"All involved parties declined to pursue charges. Put-in-Bay officers then cleared the scene with nothing further to report," the Put-in-Bay Police Department said in a statement without describing what happened.

Local media, citing police and a witness to the altercation, reported Hunt punched a man at the Bay Lodging Resort.