Jury: School failed to protect girl who says she was raped 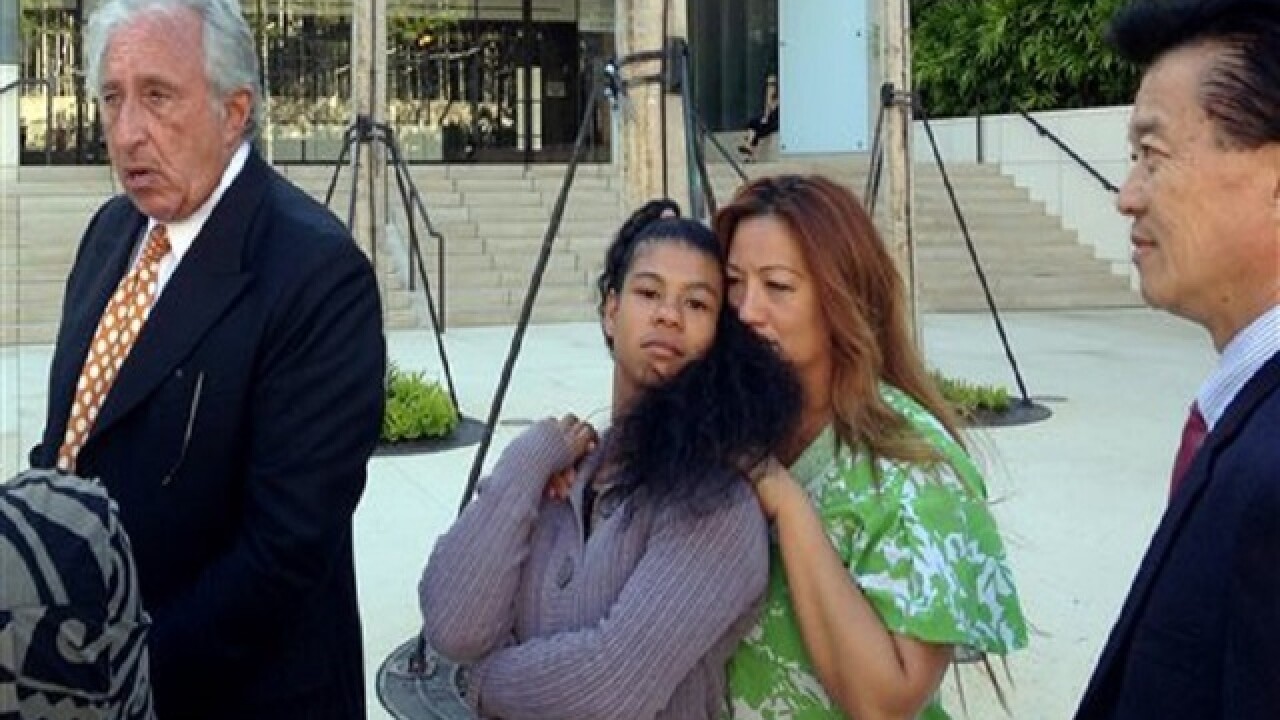 HONOLULU (AP) — Hawaii's public school system failed to protect a special education student who says she was raped by a classmate, a jury determined Monday.
But the verdict also says the state Department of Education and a special education teacher at Waianae High School didn't act recklessly or intentionally.
A jury of five men and three women deliberated over two days in a trial for a lawsuit filed by Mariana Harris' mother saying the then-freshman girl— with the intellectual ability of a second-grader— was raped by a then-senior boy from her special education class— with a low IQ — in a unisex bathroom in 2013.
The Associated Press doesn't usually identify sex assault victims unless they choose to go public. Harris, now 19, and her mother, Angelica Kauhako, told the AP after the verdict was announced that they hope by coming forward, they can help others.
"I'm happy it's over," Harris said. "I just pray that people understand it's not OK for people to get hurt that way."
Her attorneys were mostly pleased with the verdict. "It sends a clear, resounding message to the DOE that they have to pay closer attention to the special needs children and take care of them," said one of the plaintiff attorneys, Peter Hsieh.
Deputy state Attorney General Marie Gavigan, defending the department and the teacher, said she's disappointed by the verdict.
The jury awarded about $810,000 in damages to Harris and Kauhako. Their lawyers had asked for $3.2 million.
Jurors placed 95 percent of the fault to the department and 5 percent to the teacher, Kristin Lindquist. She attended the two-weeklong trial but was back at school Monday, Gavigan said. Plaintiffs didn't prove that Lindquist was "motivated by malice" according to the verdict.
Lindquist testified that when the boy returned from the bathroom, he looked "sick," so she asked him what happened. He told her he touched Harris and asked if he would be suspended, she said. She testified that she asked him if he touched her in her private areas and he said yes. It was a mistake to ask such "pointed" questions, Lindquist said, adding that she made the same mistake while questioning the girl about what happened. The girl told the teacher she was raped in the bathroom.
The teacher took immediate action and reported the incident to the dean of students, who called the police and had the boy removed from school, Gavigan told the jury.
A doctor who examined Harris the next day testified that she had tears consistent with a sexual assault. The defense argued those tears could have been caused by something else, such as her scratching herself.
Surveillance footage taken near the bathroom doesn't show that the students were inside at the same time, Gavigan said.
The jury determined plaintiffs proved that Harris was subjected to sexual harassment that was so "severe, pervasive and objectively offensive," that she was deprived of educational opportunities under a federal education law that protects against gender discrimination.
The judge could award additional damages under that law, Hsieh said.
After Kauhako filed the lawsuit, the education department sued the boy, now 21, saying that if the state is found liable, he should be responsible. The jury determined that he's not responsible to the defendants.
He was never arrested or charged in the incident.
Copyright 2016 The Associated Press. All rights reserved. This material may not be published, broadcast, rewritten or redistributed.