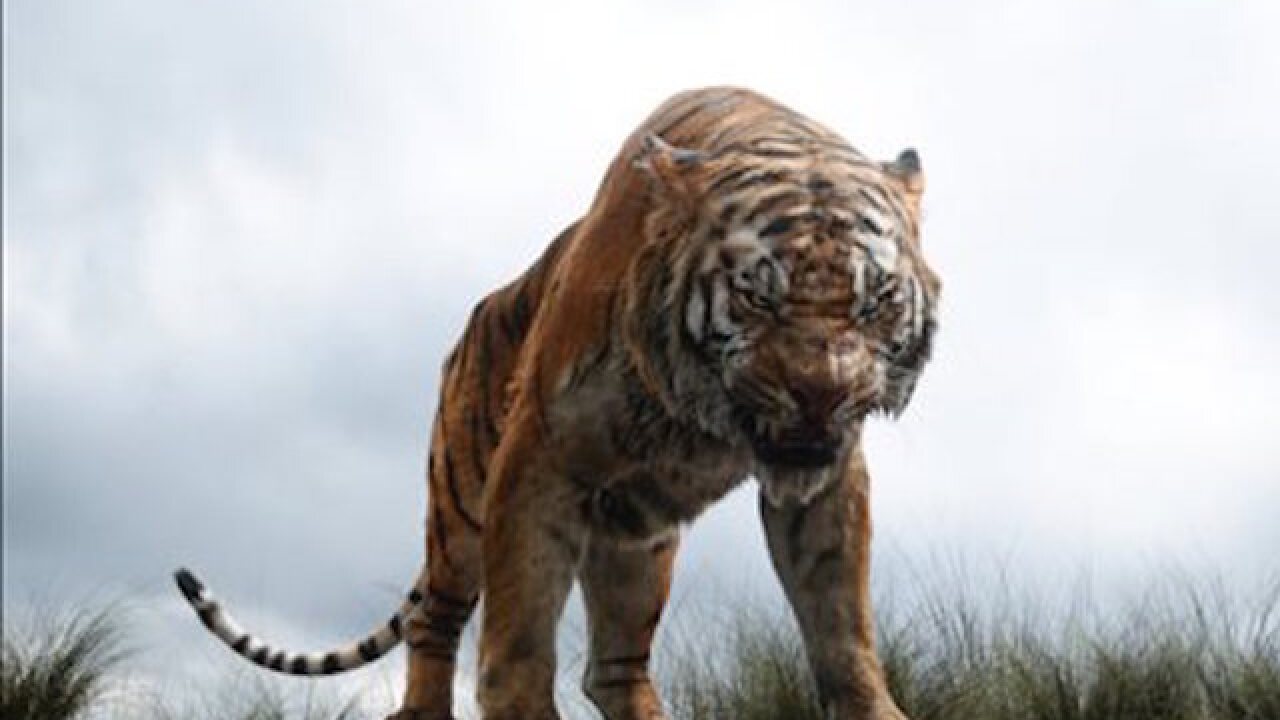 &lt;p&gt;In this image released by Disney, Shere Khan the tiger, voiced by Idris Elba, appears in a scene from, "The Jungle Book." (Disney via AP)&lt;/p&gt;

LOS ANGELES (AP) — "The Jungle Book" remained king of the box office in its second weekend in theaters, beating new opener "The Huntsman: Winter's War" by around $40 million, according to comScore estimates Sunday.

Disney's live-action/CG spectacle is proving to be a true all-audience success story. With a PG-rating and solid word of mouth, it fell only 41 percent in weekend two, earning $60.8 million and bumping its domestic total to $191.5 million in just 10 days in theaters.

The spectacular and somewhat unexpected hold of "The Jungle Book" overshadowed the debut of "The Huntsman: Winter's War," which, despite its high-wattage cast of Chris Hemsworth, Charlize Theron, Emily Blunt and Jessica Chastain, had a somewhat lackluster $20.1 million bow.

The movie cost $115 million to produce and is a follow-up to the 2012 fairy tale fantasy "Snow White and the Huntsman," this time focused on Hemsworth's character. The first film was budgeted at $170 million, earned $56.2 million in its debut and went on to gross $396.6 million worldwide.

There are a number of factors that may have contributed to the uninspiring performance of the sequel, one of which is the absence of original star Kristen Stewart, comScore senior analyst Paul Dergarabedian noted. "Snow White and the Huntsman" launched in June 2012 — right in between the releases of the final two "Twilight" films.

"She was a key reason for the opening of that first film," Dergarabedian said. "That was going to be a tough act to follow."

"The Huntsman" also failed to impress critics and is hovering around 17 percent on Rotten Tomatoes. Opening weekend audiences however gave the film a more promising B+ CinemaScore.

"I would have liked more people to go see ours, but I certainly wouldn't call it a flop either," said Nick Carpou, Universal's president of domestic distribution. "The final chapter of this one has not been written, but with a B+ CinemaScore and the audience appeal that it has, I think there's a chance we're going to play out a bit better than that word (flop) would indicate."

"Barbershop: The Next Cut" landed in third place with $10.8 million in its second weekend in theaters. "Zootopia" and "The Boss" rounded out the top five with $6.6 million and $6.1 million, respectively.

But this weekend, up 9.2 percent from last year, is all about "The Jungle Book." Dergarabedian noted that it could actually help jumpstart the summer movie season too. The big "Jungle Book" audiences are being exposed to all of the trailers for the upcoming season which kicks off with the launch of "Captain America: Civil War" in the first week of May.

"Just like 'Furious 7' last year, 'The Jungle Book' is providing a great lead in for a really big summer movie season," Dergarabedian said.

Estimated ticket sales for Friday through Sunday at U.S. and Canadian theaters, according to comScore. Final domestic figures will be released Monday.