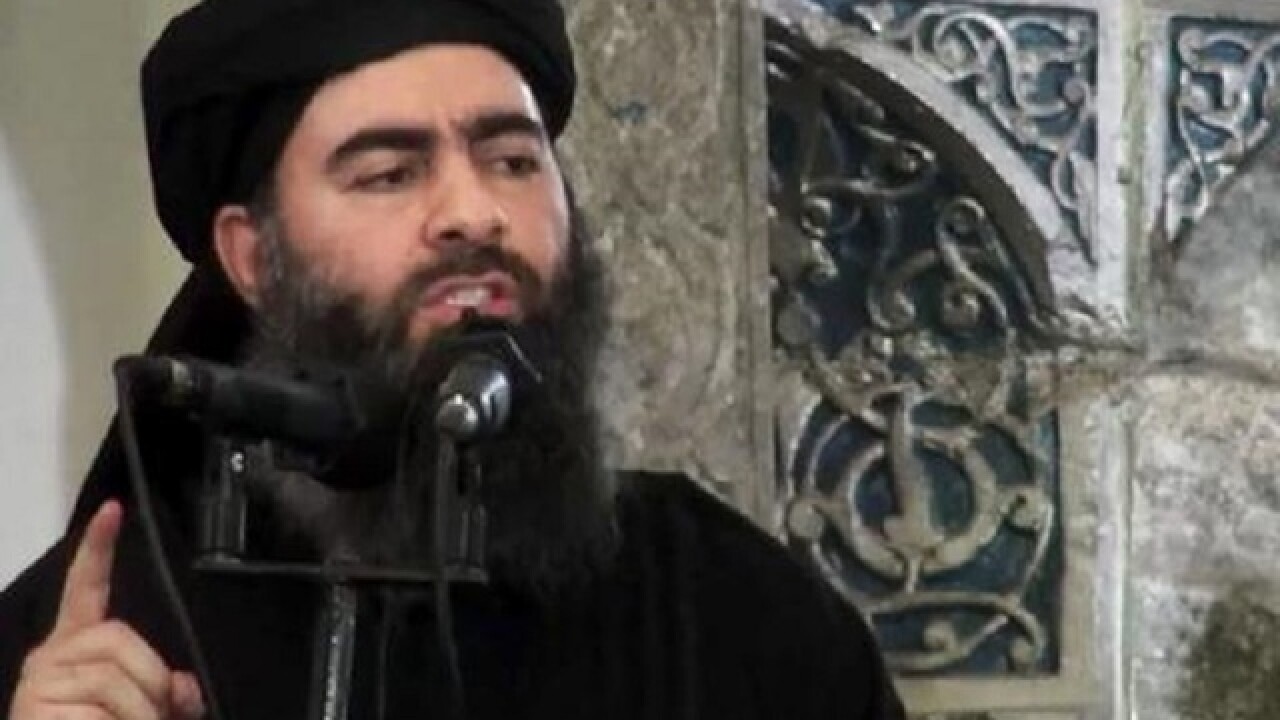 Copyright 2018 Scripps Media, Inc. All rights reserved. This material may not be published, broadcast, rewritten, or redistributed.
FILE - This file image made from video posted on a militant website Saturday, July 5, 2014, purports to show the leader of the Islamic State group, Abu Bakr al-Baghdadi, delivering a sermon at a mosque in Iraq during his first public appearance. Al-Baghdadi has released a new message encouraging his followers to keep up the fight for the city of Mosul, which they are defending against Iraqi government forces, a U.S. organization that monitors militant activity online said Thursday, Nov. 3, 2016. (AP Photo/Militant video, File)

By: Associated Press
Posted at 4:20 AM, Nov 03, 2016
IRBIL, Iraq (AP) — The shadowy leader of the Islamic State group has released a new message encouraging his followers to keep up the fight for Mosul as they defend the city against a major offensive Iraqi government and allied forces seeking to rout the militants from their last urban stronghold in Iraq.
Abu Bakr al-Baghdadi's rallying call came in a recording, more than half an hour long, released by the militant group's al-Furqan media arm late on Wednesday. It was not clear when the recording was produced and al-Baghdadi's whereabouts are unknown.
Iraqi special forces stormed into Mosul's eastern outskirts Tuesday after two weeks of advances through surrounding IS-held territory.
In the recording, al-Baghdadi rallies his fighters — especially in Mosul — and calls on them to obey orders while remaining resilient and steadfast.
"Oh you who seek martyrdom! Start your actions! Turn the night of the disbelievers into day," he says, according to a translation provided by the SITE Intelligence Group, a U.S. organization that monitors militant activity online which reported the al-Baghdadi recording first.
"Totally decimate their territories, and make their blood flow like rivers," al-Baghdadi also says.
He urges others to carry out attacks in Saudi Arabia, whose leadership IS opposes, and Turkey, which has deployed troops and artillery north of Mosul and is training Sunni Arab and Kurdish forces there.
The recording was the reclusive al-Baghdadi's first released message to supporters since Iraqi forces launched the decisive battle to retake Mosul, the country's second-largest city, from IS.
In it, he attempted to harness the feelings of Sunni disenfranchisement that preceded the 2014 IS takeover of Mosul, a largely Sunni city in Shiite-majority Iraq. Using a derogatory term for Shiites, he says followers of the Muslim sect want to drive "empty Iraq of Sunnis and replace them with the worst of people."
He calls on fighters to "respond to all attacks," and to "target all in their media and forces, and all who belong to them."
The audio message could not be independently verified, though the speaker's voice and style of delivery sounded like that in previous recordings of al-Baghdadi.
The Islamic State group is fighting to hold Mosul as Iraqi forces and allied Kurdish forces advance on the city from multiple directions with U.S.-led coalition support. It is the Iraqi military's largest offensive since the 2003 U.S.-led invasion.
The city of more than one million people and surrounding territory fell to IS fighters during a surprise attack in June 2014. Al-Baghdadi visited the city soon after the takeover, and from inside Mosul declared an Islamic caliphate that at one point covered nearly a third of Iraq and Syria.
Iraqi forces have proceeded cautiously since breaching Mosul's eastern outskirts this week. They have yet to move into more densely populated areas that could lead to weeks, if not months, of clearing booby-trapped buildings and bloody house-to-house combat.
On Wednesday, residents in the easternmost district of Gogjali cautiously welcomed liberating Iraqi troops, with some raising white flags and flashing the "V'' for victory sign. Men in the area celebrated by shaving the beards they were forced to grow under IS rule.
Copyright 2016 The Associated Press. All rights reserved. This material may not be published, broadcast, rewritten or redistributed.