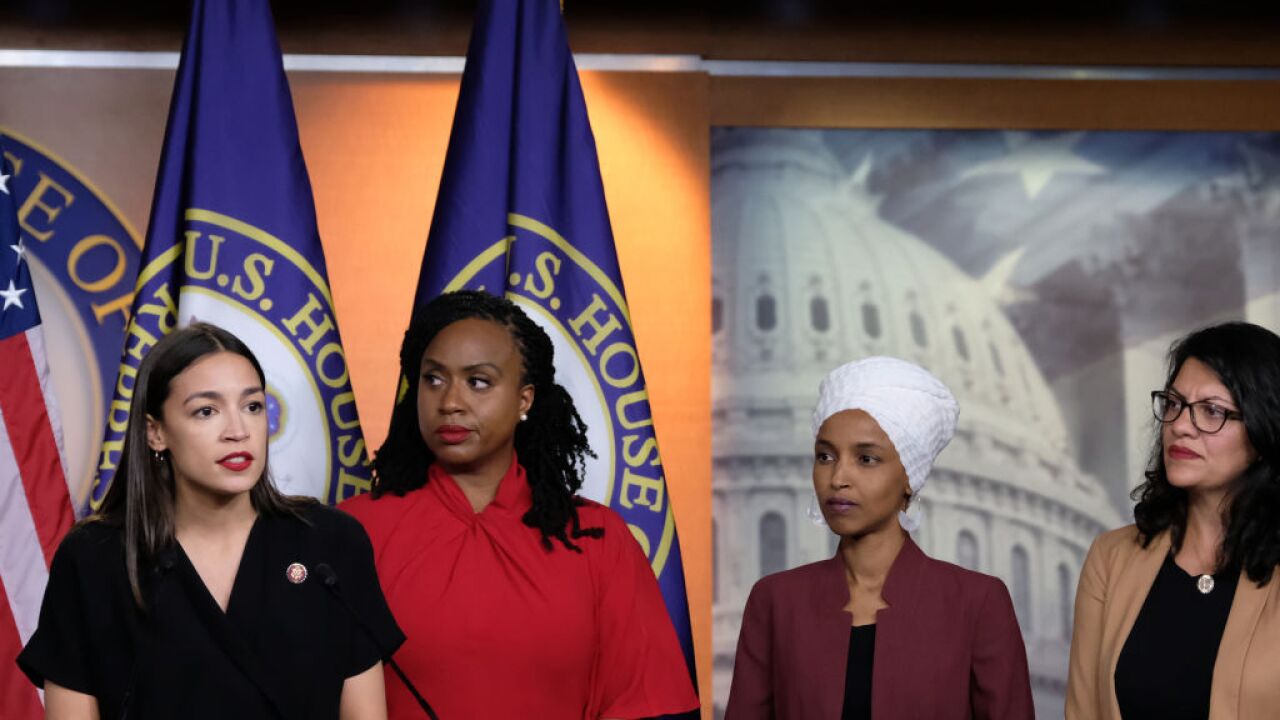 Two top Illinois GOP officials are condemning a meme recently posted to the Facebook page of the Illinois Republican County Chairmen's Association that depicted four minority congresswomen as being "THE JIHAD SQUAD."

The image, which has since been taken down from the group's page, is modeled after an action movie poster and edited to include the four lawmakers' faces on the bodies of various characters. The women in the photo are Democratic Reps. Ilhan Omar of Minnesota, Ayanna Pressley of Massachusetts, Alexandria Ocasio-Cortez of New York and Rashida Tlaib of Michigan. The image includes the words "THE JIHAD SQUAD" below the names along with the words "POLITICAL JIHAD IS THEIR GAME" and "IF YOU DON'T AGREE WITH THEIR SOCIALIST IDEOLOGY, YOU'RE RACIST."

The meme also includes the association's logo. It's unclear who in the party posted the image, or if those responsible have been admonished.

President Donald Trump has recently criticized the four women, known as "the Squad," in racist terms as part of an effort to define the Democratic Party as far-left. Omar and Tlaib are the first two Muslim women in Congress, and Ocasio-Cortez identifies as a Democratic socialist.

CNN has reached out to the offices of the four lawmakers for comment.

A screenshot of the post shared by Craig Wall, a reporter for CNN affiliate WLS in Chicago, shows the image was live as of late Friday night. On Sunday, Tim Schneider, the chairman of the Illinois Republican Party, condemned the post.

"I strongly condemn evoking race or religion as the basis for political disagreement. The recent social media post coming from the IRCCA does not reflect my values or the Illinois Republican Party's values," Schneider said in a statement .

Schneider added, "Bigoted rhetoric greatly distracts from legitimate and important policy debates and further divides our nation" and said that although he disagrees with the policy positions held by the group of lawmakers, his "intense disagreement ... has absolutely nothing to do with their race or religion."

Mark Shaw, the president of the RCCA, said Sunday in a statement that he "condemn(s)" the posting, which he said was "unauthorized."

"I am sorry if anyone who saw the image was offended by the contents," Shaw said in a Facebook post, adding that the posting "is an unfortunate distraction from the serious debate surrounding the policies advocated by" the lawmakers.

Shaw also said the approval process for social media posts will be reviewed in the wake of the posting "to insure that any content posted in the future represents the 'big-tent' nature of the Republican Party."

The Cook County Democratic Party called the image "a racist and inflammatory attack."

"The post perpetuates the recent attacks by President Trump, promoting lies and racism to alienate immigrants, women, and people of color," the county Democratic Party said in a statement posted to Facebook. "This language of hatred and bigotry has no room in our society and has dangerous consequences."

The four progressive lawmakers have been outspoken critics of Trump, particularly his immigration policies. Last week, the House voted to condemn the racist language used in the tweets by the President, who on Sunday continued his attacks, questioning in a tweet their commitment to America and saying that they are "destroying the Democratic Party."