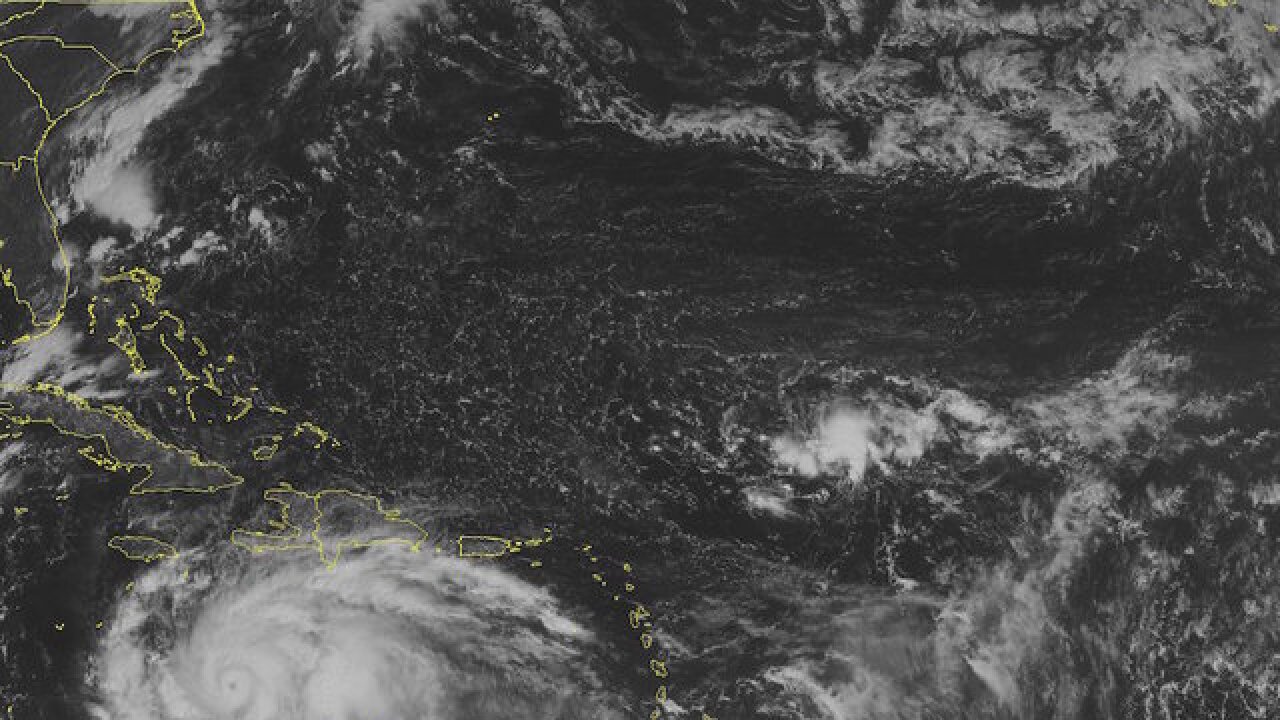 Copyright Associated Press
&lt;p&gt;This NOAA satellite image taken Sunday, Oct. 2, 2016, at 9:45 AM EDT shows Hurricane Matthew continuing to trek across the southern Caribbean, and remains a category 4 hurricane with maximum sustained winds upwards of 145 MPH. Matthew is now heading slowly to the northwest and is about 325 MI SSW of Port Au Prince. Hurricane warnings have been issued for Jamaica, Haiti, and eastern Cuba. (Weather Underground via AP)&lt;/p&gt;

PORT-AU-PRINCE, Haiti (AP) — Heavy rains from the outer bands of Hurricane Matthew drenched Jamaica and Haiti on Monday, flooding streets and sending many people to emergency shelters as the Category 4 storm approached the two countries. Two deaths were reported in Haiti, bringing the total for the storm to at least four.

Matthew had sustained winds of 140 mph (220 kph) as it moved north, up from 130 mph (210 kph) earlier in the day. The center was expected to pass just east of Jamaica and near or over the southwestern tip of Haiti early Tuesday before heading to eastern Cuba, the U.S. National Hurricane Center in Miami said.

"We are looking at a dangerous hurricane that is heading into the vicinity of western Haiti and eastern Cuba," said Richard Pasch, a senior hurricane specialist with the center. "People who are impacted by things like flooding and mudslides hopefully would get out and relocate because that's where we have seen loss of life in the past."

Many were taking that advice. In Jamaica, more than 700 people packed shelters in the eastern parish of St. Thomas and the Salvation Army said there were about 200 people at its shelters in Kingston as it put out a call for mattresses and cots. Many streets flooded throughout the country's southeast.

Still, many people chose to stick it out. Local Government Minister Desmond McKenzie said all but four residents of the Port Royal area near the Kingston airport refused to board buses and evacuate.

Fisherman Carlos Smith in St. Catherine Parish said he realized the storm appeared to be dangerous but he couldn't abandon his property. "I want to leave anytime now and go to a shelter, but we can't leave our things because that's how we hustle and make a living," he said.

In Haiti, authorities went door to door in the south coast cities of Les Cayes and Jeremie to make sure people were aware of the storm. At least 1,200 people were evacuated to shelters in churches and schools.

"We are continuing to mobilize teams in the south to move people away from dangerous areas," said Marie Alta Jean-Baptiste, head of Haiti's civil protection agency.

In Port-au-Prince, schools were shuttered and residents lined up at gas stations and cleared out the shelves at supermarkets as a light rain fell in the capital. Some worried the city of roughly a million people would not fare well. "We are not prepared," unemployed mason Fritz Achelus said as he watched water pool on a downtown street.

At least two fishermen died in rough water churned up by the storm, Jean-Baptiste said. A boat carrying one of the men capsized early Monday off the tiny southwestern fishing town of Saint Jean du Sud as he was trying to bring his wooden skiff to shore. The body of the other was recovered a short time later off the nearby town of Aquin after he apparently drowned.

Their deaths brought the total for the storm to at least four. One man died Friday in Colombia and a 16-year-old in St. Vincent and the Grenadines on Sept. 28 when the system passed through the eastern Caribbean.

Forecasters said the storm was expected to dump as much as 40 inches (100 centimeters) of rain on some isolated areas of Haiti, raising fears of deadly mudslides and floods in the heavily deforested country where many families live in flimsy houses with corrugated metal roofs.

Matthew is one of the most powerful Atlantic hurricanes in recent history and briefly reached the top classification, Category 5, becoming the strongest hurricane in the region since Felix in 2007. The hurricane center said the storm appeared to be on track to pass east of Florida through the Bahamas, but it was too soon to predict with certainty whether it would threaten any spot on the U.S. East Coast.

"Although our track is to the east of Florida, interests there should remain vigilant and we can't rule out the possibility of impacts," Pasch said.

After passing Jamaica and Haiti, Matthew's center was expected to pass about 50 miles (80 kilometers) east of the U.S. Navy base at Guantanamo Bay, Cuba, where authorities evacuated about 700 spouses and children of service members on military transport planes to Florida.

The U.S. installation has a population of about 5,500, including 61 men held at the detention center for terrorism suspects. Navy Capt. David Culpepper, the base commander, said emergency shelters had been set up and authorities were bracing for 80 mph winds along with storm surge and heavy rain that could threaten some low-lying areas, including around the power plant and water desalination facility.

"We have no choice but to prepare ourselves to take a frontal assault if you will," Culpepper said.