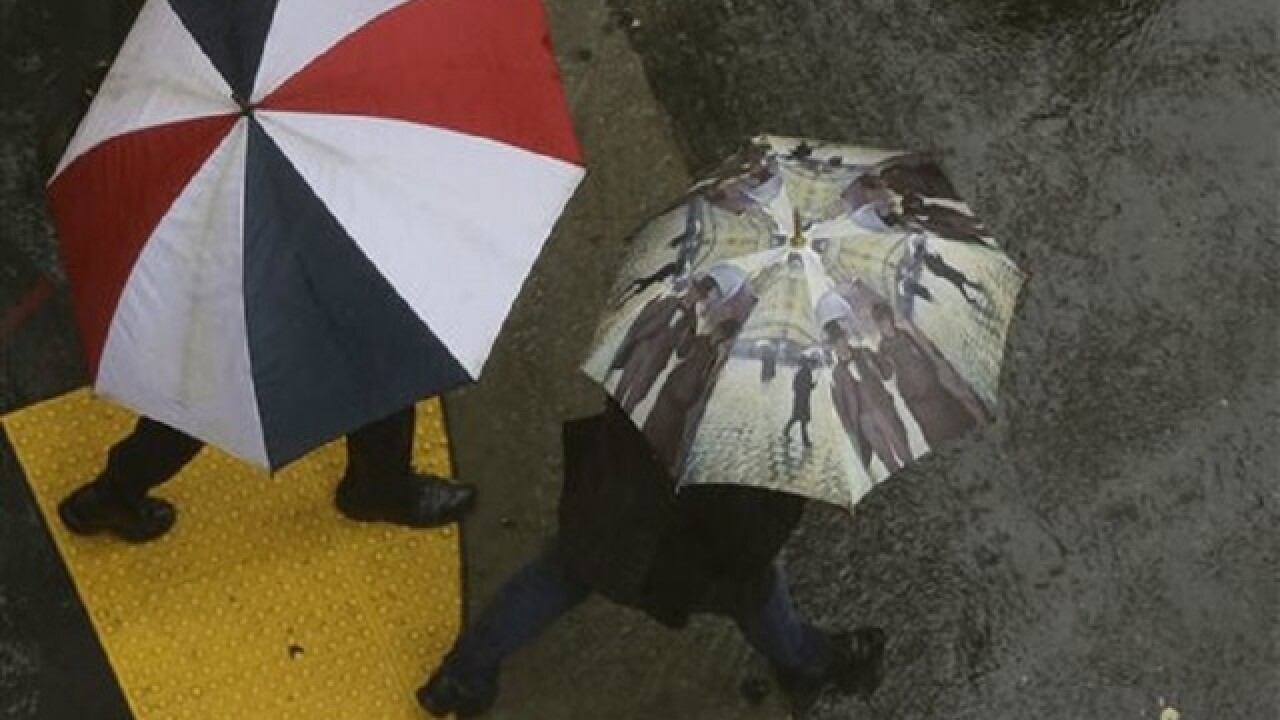 By: Associated Press
Posted at 12:28 AM, Mar 07, 2016
SACRAMENTO, Calif. (AP) — A woman died in Northern California after being trapped in a car that became submerged in floodwater on a section of highway that was closed amid heavy rain, authorities said Sunday.
The casualty was reported after a storm that rolled across California on Saturday led to the evacuations and rescues in some low lying areas, where thousands of people lost power after powerful winds toppled trees and power lines.
Chia Xiong, 51, of Marysville, was underwater for about 15 minutes Saturday night because it took divers some time to find the vehicle, which plunged into 6 to 8 feet of water, according to fire officials and the California Highway Patrol.
The driver, who was able to get out of the car, was arrested for investigation of driving under the influence and vehicular manslaughter, CHP Officer Jodie Beck said.
Officers who were at a road blockade saw Neng Yang, 55, of Sacramento go around the closure on State Route 70 in Olivehurst, about 35 miles north of Sacramento, and enter the floodwater, Beck said.
Firefighters rescued four people stranded along the Los Angeles River in the Encino area while in Santa Cruz County people living along Soquel Creek and the Upper San Lorenzo River were evacuated because of rising water.
A second winter storm reached the northernmost part of the state Sunday and was expected to spread across California overnight, indicating that March will not be as parched as it was last month. Forecasters warned of strong winds, heavy snow in the mountains and dangerous breaking waves along the coast.
California is not the only place experiencing severe weather. Conditions are especially ripe for tornadoes in the Southeast and Great Plains. Specifically, Louisiana, Texas, Oklahoma, Arkansas, Missouri, Kentucky, southern Illinois, Alabama, Mississippi, Georgia, Florida, North and South Carolina and parts of Virginia.
Back in the Sierras, the Sugar Bowl ski resort near Donner Summit reported 7 inches of new snow at the summit overnight and slopes full of people Saturday.
"When it snows people are anxious to get up here and get to those fresh tracks," said Lloyd Garden, Sugar Bowl's marketing coordinator. "Die-hards love to ski when it's snowing. It's very peaceful, it's quiet and the turns are fresh and great."
Along the coast at the Monterey Bay Aquarium, a wild sea otter sought shelter from stormy seas in the aquarium's Great Tide Pool so she could give birth, and she had her pup in full view of a crowd of visitors and staffers.
"There it is!" someone shouted and a round of applause followed as the single pup came into the world on a large outcropping of rock amid a smattering of rain.
A seven-day total could approach 20 inches of rain in Northern California and up to three inches in the southern end of the state, where rain is expected to arrive Sunday.
Farther north, a 48-hour winter storm warning went into effect in the state's far northwestern and central areas as well as the Sierra Nevada, where snow totals could range from 2 feet to 4 feet at elevations above 8,000 feet. Sierra snow levels will lower to near 4,000 feet by Sunday, forecasters said.
The Sierra snowpack, which normally stores about 30 percent of California's water supply, was only 83 percent of the March 1 average when it was measured earlier this week. That's much better than a year earlier, but after years of drought nearly all the state's major reservoirs hold far less water than average by this time of year, the Department of Water Resources said.
Starting on Monday and continuing into the rest of next week, ample moisture will be pulled in from the Gulf of Mexico ahead of a slow moving cold front, leading to days of rain for a large swath of the central and southern U.S., stretching from the central Gulf Coast up through to the Ohio Valley.
Heavy rainfall and flooding are possible throughout Oklahoma as a storm system makes its way through the state, with the strongest storms capable of producing large hail and damaging wind gusts, forecasters said.
The greatest threat for the heaviest accumulations of rain are northeast Texas into Arkansas and Louisiana and other parts of the lower or middle Mississippi River Valley, where five-day rain rainfall totals could exceed or 7 or 8 inches.
Copyright © 2016 AZTECA INTERNATIONAL CORPORATION. All rights reserved.