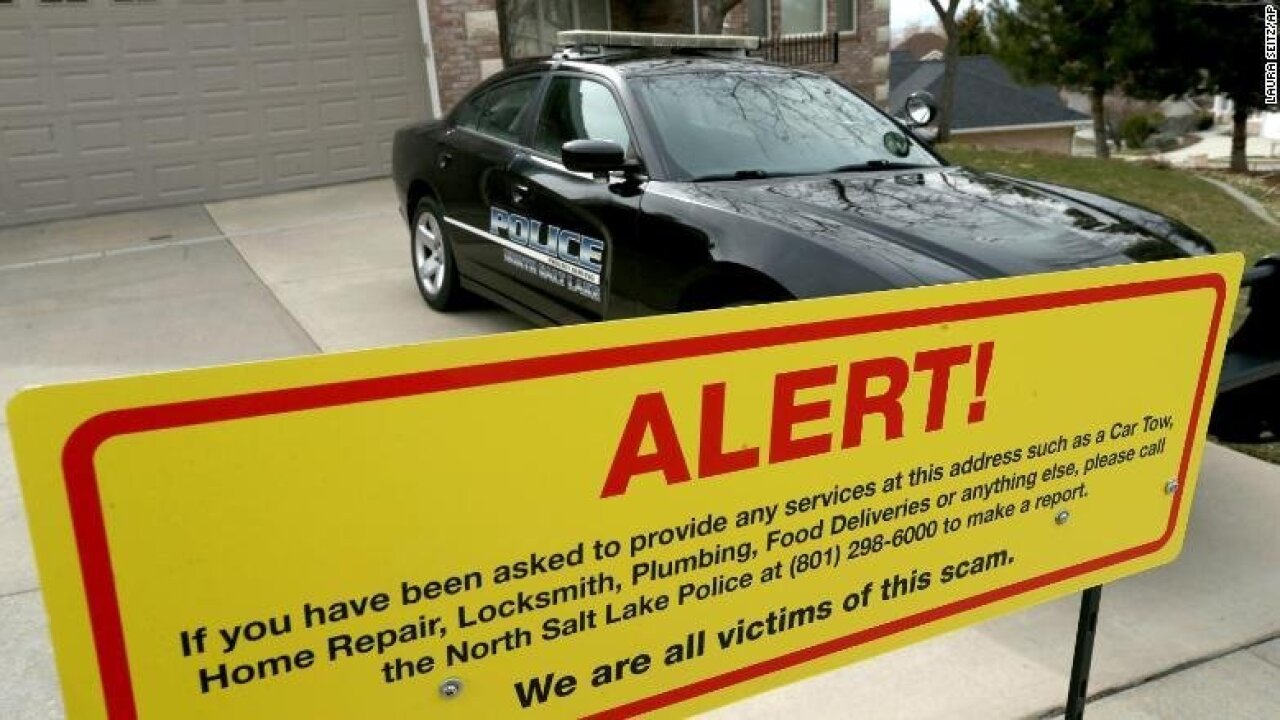 Laura Seitz/AP/Laura Seitz/AP
Loren Okamura, 44, is accused of conducting an elaborate cyberstalking campaign against a Utah woman and her father by sending unwanted repairmen, food deliveries and other visitors to their home. The victimized family had to put this sign up in front of their home.

(CNN) -- A Hawaii man is accused of conducting an elaborate cyberstalking campaign against a Utah woman and her father by sending unwanted repairmen, food deliveries and other visitors to their home.

The father estimates that between August 2018 and March more than 500 people came to their North Salt Lake home at the alleged stalker's behest, and that some of the visits stemmed from the suspect "posting the family's address on Craigslist stating that the homeowner wants drugs and prostitutes to come to the house," according to a federal motion to detain the suspect.

Loren Okamura, 44, is charged with two counts of cyberstalking, two counts of transporting an individual to engage in prostitution and a count of interstate threats, court documents show.

There are few details available about the transporting-for-prostitution charges. US Attorney John Huber declined to provide information during a news conference, and Okamura's indictment says only that in June and July of 2018, he is accused of transporting the Utah woman he allegedly stalked to Hawaii with the intent that she "engage in prostitution."

As for the threat counts, Okamura is accused of contacting the woman and, according to the indictment, telling her in an email: "Sleep with one eye open and keep looking over your shoulder you crazy b**** we are coming for you and your dumba** daddy and crazy a** mommy."

Okamura also allegedly told her, "You should just kill yourself and do your family a favor already."

The motion to detain also alleges that in January 2019, "Okamura left egregious amounts of unwanted voicemails on the adult woman's voicemail, including multiple messages per day."

Okamura allegedly continued the stalking even after the family obtained cease-and-desist orders and a civil stalking injunction in Utah, court documents say.

Prosecutors have asked that he remain detained until he can be transported to Utah to stand trial.

The Office of the Public Defender in Honolulu, which is reportedly representing Okamura, was closed for Thanksgiving. He is being held without bail in the custody of the United States Marshals Service, court records show.

Authorities declined to reveal why Okamura allegedly selected the Utah family to harass and intimidate, but Huber told reporters they were not random victims.

"It's really extreme stalking," Huber said. "I'll tell you what made this an important case for Utah is that a family ... was tormented with hundreds of incidents and a course of conduct that really changed their life and even their own neighborhood -- so the victimization expanded beyond a person or home to an entire neighborhood. We' re not going to let that stand."

The stalking became so problematic that the family installed a bright yellow sign in front of their home, put a lock on their gate and even at one point parked a North Salt Lake Police car in their driveway, local media reported.

"If you have been asked to provide any services at this address such as Car Tow, Home Repair, Locksmith, Plumbing, Food Deliveries or anything else, please call the North Salt Lake Police," the yellow sign read. "We are all victims of this scam."

Sgt. Jeffrey Plank with the Utah Department of Public Safety's cybercrime unit traveled to Hawaii last week and worked with agents from the FBI's Honolulu office to arrest Okamura, he said.

The hunt for Okamura took about 15 hours, he said, because the suspect had no permanent address or place of employment. He also used a phone app to "spoof location data," the motion to detain says.