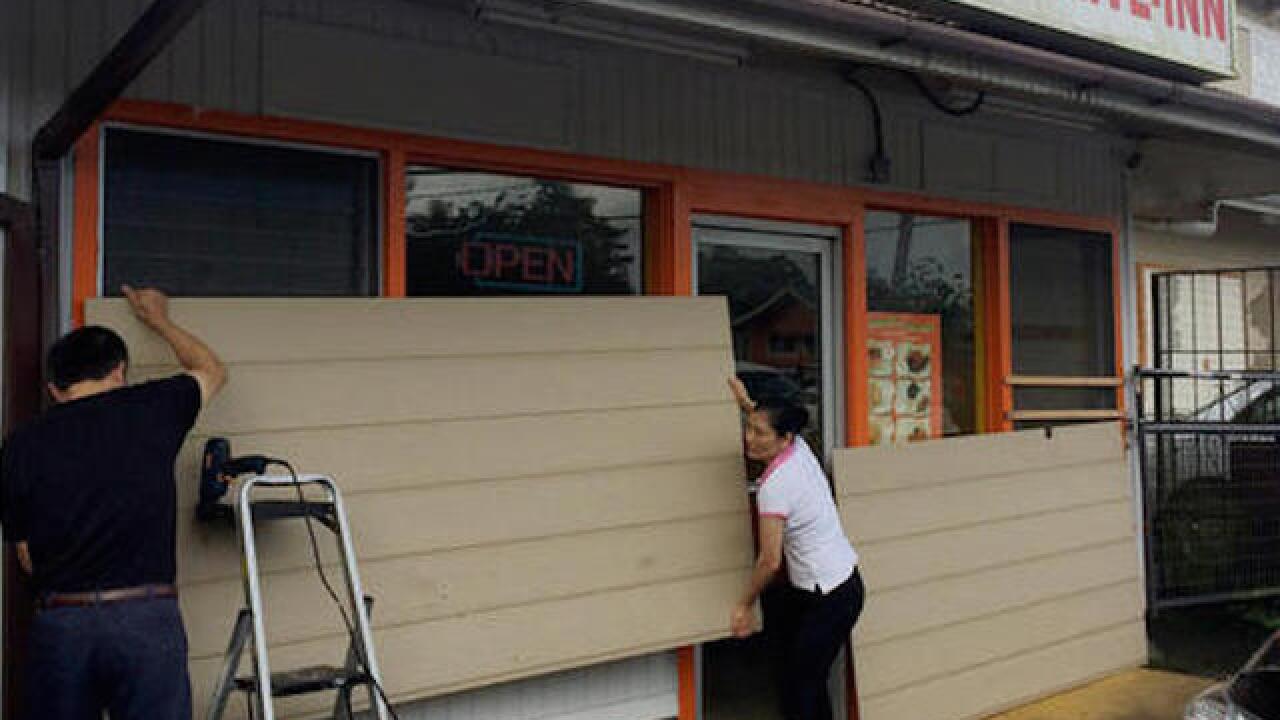 HILO, Hawaii (AP) — A tropical storm left parts of Hawaii's Big Island soggy but intact Thursday as residents of the island state prepared for a second round of potentially volatile tropical weather.

Hawaii Island was pummeled with heavy rains and powerful waves overnight, but residents woke to blue skies and little damage after Madeline skirted the island. Hurricane Lester remains on track to impact the islands this weekend, but possibly after being downgraded to a tropical storm.

"So, really grateful for this respite today. I saw the sun this morning when I was driving into work," Kanani Aton, a spokeswoman for the Hawaii County civil defense agency, said Thursday.

The National Weather Service dropped the tropical storm warning for Madeline on Thursday.

"It has passed south of our island," Aton said.

Several roads and a bridge that were closed because of flooding have reopened, she said. All county and state facilities, including bus and solid waste service, were to resume Thursday.

Parks will not reopen until damage assessment teams have a chance to investigate, Aton said. At one park, water has receded after waves crashed into a seawall that surrounds Liliuokalani Gardens Park at Hilo Bay. Water had accumulated on the grass of the gardens, leaving stairs of a pavilion partially submerged.

Damage assessment teams will also be in targeted areas, such as places prone to flooding, Aton said.

Before the storm brushed by, some merchants had placed plywood on windows facing Hilo Bay. But other windows that hadn't been covered didn't show signs of damage at first light Thursday.

On Oahu, gusty winds continued through the night with power lost in some Honolulu neighborhoods. Transformers were seen flaring in one hillside community overlooking the state's largest city as the lights went dark.

Some tree branches were littering the ground Thursday morning, but no major damage was immediately visible.

The storm didn't keep President Obama from visiting Honolulu Thursday on his way to Midway Atoll.

"We had nothing to alarm us," said Kalei Makua, a retired mason who lives in Hawaiian Beaches on the Big Island. "Maybe 25 to 30 miles an hour wind, moving the albizias (trees)...Getting ready for that next one."

Meanwhile, Maui County and Hawaii County were under hurricane watch as Category 2 Lester careened toward the islands.

The storm is on a track to pass just north of the island chain and the eye of the storm isn't expected to make landfall. But if the storm veers to the south it could have a much greater impact, said Ian Morrison, meteorologist from the National Weather Service says.

Lester was expected to slowly weaken and remain a hurricane as it passes the state Saturday and Sunday. The eastern part of the state could be hit with heavy rains and tropical storm or hurricane-force winds starting Friday night, Morrison said.

One business was thinking ahead to Lester as they boarded up windows at Hulakai Store, a surf shop in Hilo, on Wednesday ahead of Madeline. "We'll probably keep it up till Sunday, waiting for the second one to come through," said supervisor Renee Balanga.

Gov. David Ige has issued an emergency proclamation for both Madeline and Lester, allowing the state to quickly spend money.

Elsewhere, forecasters say Tropical Storm Hermine could strike the South as a hurricane.

A hurricane warning was in effect for Florida's Big Bend from the Suwannee River to Mexico Beach. And on the East Coast, a tropical storm warning was issued for an area extending from Marineland, Florida, northward to the South Santee River in South Carolina.