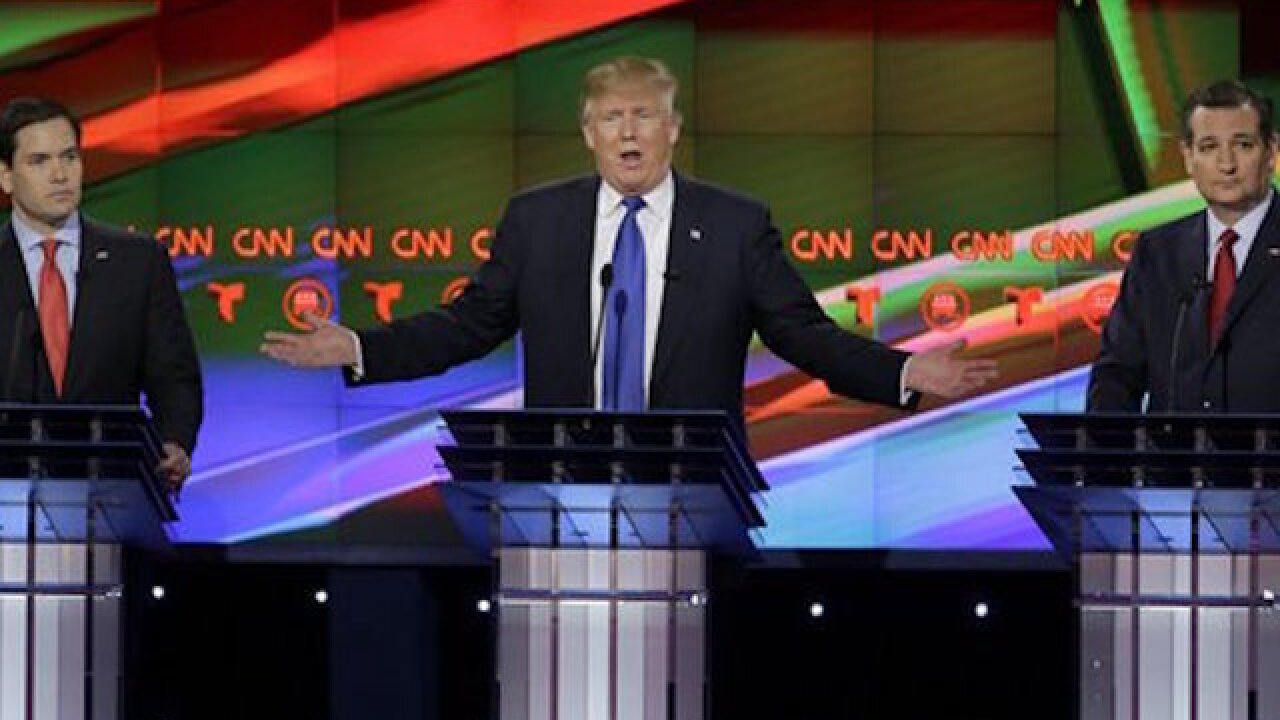 Trump was asked Sunday on CNN's "State of the Union" whether he rejected support from the former KKK Grand Dragon and other white supremacists after Duke told his radio followers this week that a vote against Trump was equivalent to "treason to your heritage."

The comments sparked a wave of censures with just two days to go before 11 states hold GOP primaries involving about a quarter of the party's total nominating delegate count.

Trump was asked Friday by journalists how he felt about Duke's support. He said he didn't know anything about it and curtly said: "All right, I disavow, ok?"

Trump hasn't always claimed ignorance on Duke's history. In 2000, he wrote a New York Times op-ed explaining why he abandoned the possibility of running for president on the Reform Party ticket. He wrote of an "underside" and "fringe element" of the party, concluding, "I leave the Reform Party to David Duke, Pat Buchanan and Lenora Fulani. That is not company I wish to keep."

Campaigning in Virginia, Florida Sen. Marco Rubio pounced on Trump's latest position on Duke, shifting to a more serious tone after spending the weekend mocking his rival's hair and "the worst spray tan in America."

"We cannot be a party who refuses to condemn white supremacists and the Ku Klux Klan," Rubio told thousands of supporters gathered in Leesburg, Virginia. "Not only is that wrong, it makes him unelectable. How are we going to grow the party if we nominate someone who doesn't repudiate the Ku Klux Klan?"

"You're better than this," Cruz wrote. "We should all agree, racism is wrong, KKK is abhorrent."

Democrat Bernie Sanders also lashed out at his Republican rival on Twitter, writing: "America's first black president cannot and will not be succeeded by a hatemonger who refuses to condemn the KKK."

Trump also garnered backlash Sunday for recently retweeting a quote from Benito Mussolini, the 20th century fascist dictator of Italy, which reads: "It is better to live one day as a lion than 100 years as a sheep."

Trump told NBC's "Meet the Press" on Sunday, "I know who said it. But what difference does it make whether it's Mussolini or somebody else? It's certainly a very interesting quote."

The first-time candidate has long described his campaign as a "movement" of the "silent majority," a phrase borrowed from former President Richard Nixon's "Southern strategy" aimed at working-class white voters in the decade after the peak of the civil rights movement.

The latest shake up in the GOP race comes as attention shifts to the South, where the region will dominate on Super Tuesday — March 1 — and the weeks beyond.

Trump holds commanding leads across the region, with the exception of Cruz's home state of Texas, a dynamic that puts tremendous pressure on Rubio and Cruz as they try to outlast each other and derail Trump.

The two first-term senators continue a personal and policy-based barrage against Trump, warning his nomination would be catastrophic for the party in November and beyond.

"We're about to lose the conservative movement to someone who's not a conservative and (lose) the party of Lincoln and Reagan to a con artist," Rubio said Sunday on Fox News.

Trump, for his part, relishes his position, mocking the Republican establishment and his flailing rivals. "It's amazing what's going on," he told NBC, calling his campaign a "movement."

On the Democratic side, Hillary Clinton received another burst of momentum Saturday after her lopsided victory in South Carolina, fueled by an 84-16 advantage among African-Americans, a key Democratic constituency that will also play a dominant role in several Super Tuesday states.

"We got decimated, that's what happened," Sanders said on ABC, though he promised to continue his campaign against what he describes as a political and economic oligarchy.

Trump also rejected calls from Rubio — who he repeatedly referred to Sunday as "Little Marco" — and Cruz to release his tax returns, saying he can't share returns that are under IRS audit. The senators on Saturday released summary pages of several years' worth of their personal returns. Trump says he's already shared his personal financial details in separate disclosure forms.

Separately, Cruz warned the "Trump train" could become "unstoppable" if he rolls to big victories Tuesday. Cruz cast Trump as a carbon copy Clinton and suggested that not even Trump "knows what he would do" as president.

Tuesday, Cruz said, "is a battle to determine where conservatives go."

Still, Cruz confirmed to CNN's Jake Tapper that he "will support the Republican nominee, period, the end." Rubio has sidestepped questions about whether he could support Trump.